It was late on a Friday when Tim Whitlock, Director of Information Technology at Mizuno USA, received an urgent email from the company’s new CEO, Mark M. O’Brien. 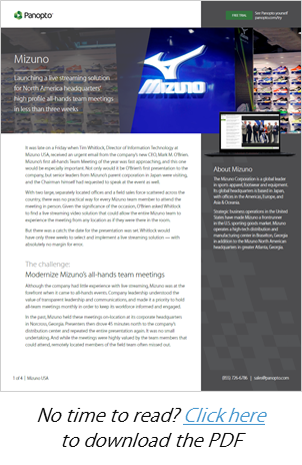 Mizuno’s first all-hands Team Meeting of the year was fast approaching, and this one would be especially important. Not only would it be O’Brien’s first presentation to the company, but senior leaders from Mizuno’s parent corporation in Japan were visiting, and the Chairman himself had requested to speak at the event as well.

With two large, separately located offices and a field sales force scattered across the country, there was no practical way for every Mizuno team member to attend the meeting in person. Given the significance of the occasion, O’Brien asked Whitlock to find a live streaming video solution that could allow the entire Mizuno team to experience the meeting from any location as if they were there in the room.

But there was a catch: the date for the presentation was set. Whitlock would have only three weeks to select and implement a live streaming solution — with absolutely no margin for error.

Although the company had little experience with live streaming, Mizuno was at the forefront when it came to all-hands events. Company leadership understood the value of transparent leadership and communications, and made it a priority to hold all-hands meetings monthly in order to keep its workforce informed and engaged.

In the past, Mizuno held these meetings on-location at its corporate headquarters in Norcross, Georgia. Presenters then drove 45 minutes north to the company’s distribution center and repeated the entire presentation again. It was no small undertaking. And while the meetings were highly valued by the team members that could attend, remotely located members of the field team often missed out.

Initially, video had seemed like an obvious solution, both to eliminate the duplication of meetings and to expand the audience to include the field team members. Attempts to live stream video of the team meetings, however, proved frustrating for viewers, producers and presenters:

Based on these experiences, Whitlock knew finding the right live streaming solution in less than three weeks was a formidable challenge. “I didn’t even know if the video technology we needed existed,” he recalled.

With the event quickly approaching, Whitlock got to work searching for a solution. In his research, he quickly found a number of specialized live streaming tools, along with several more comprehensive video platforms that also included live streaming capabilities.

Comparing Panopto’s enterprise video platform with competing solutions, it was Panopto’s flexibility and the quick response of the customer support team that convinced Whitlock to sign up for a free trial and pilot the solution at the coming team-wide meeting.

Right away in his initial testing, Whitlock was impressed with how easy Panopto made it to set up a professional-quality live event broadcast. He could initiate a new live stream simply by clicking “Webcast” in the Panopto desktop app, or schedule a live stream ahead of time in the Panopto video library.

Panopto automatically recognized his video cameras. It could stream multiple video feeds simultaneously — making it simple to share viewpoints from different cameras, along with presentation decks, laptop screens, and other materials, all at once. Panopto could even sync and stream live video captured on different laptops, without requiring any cables or other connections.

In addition to the product’s ease of use, Whitlock praised Panopto for several features that stood out from its competitors:

Personal, Dedicated Support
Whitlock had tight window in which to find and implement a live streaming solution for the event. While other vendors did little more than direct him to online documentation, Panopto’s support team guided Whitlock through the entire implementation and helped him make important decisions about AV equipment.

“I had a lot of questions about everything from audio and video equipment to specific product capabilities,” Whitlock said. “The team at Panopto was there for me with answers and guidance every step of the way.”

Try Before You Buy
Panopto’s free trial made the final decision easy for Whitlock. “Being new to live streaming, I wanted to try something to see if we could make it work,” he said. “I didn’t want to pay thousands of dollars for something and then find out that it wasn’t going to work for us. Believe it or not, other companies don’t have free trials. Being able to pilot with Panopto really took the fear out of the decision for me.” 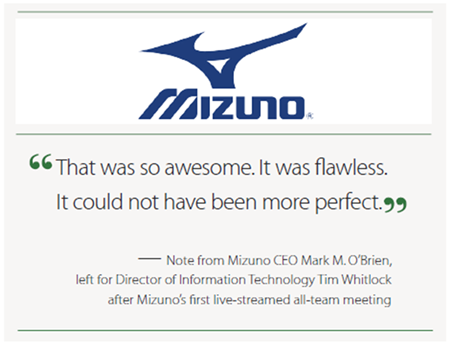 “It was a high-stakes meeting,” recalled Whitlock. “Audio and video quality were of critical importance, and in addition, presenters wanted to show PowerPoint slides, play videos, and stream music. With Panopto, everything worked perfectly.”

On the day of the event, the Mizuno team was ready.

With more than 100 team members filling the room and hundreds more viewing online, Whitlock managed the audio while another team member worked the video camera. Together, they flawlessly streamed the meeting in full, capturing all the audio and visual elements for audiences onsite and online.

Scribbled on the whiteboard in Whitlock’s office the next morning was a note from the new CEO: “That was so awesome. It was flawless. It could not have been more perfect.”

The response from the Mizuno team was also unprecedented. A flood of emails came in from those who streamed the presentation and were excited to have been able to see and experience the team meeting live for the first time. The Panopto live stream succeeded in making them feel like they were in the room. Mizuno team members raved that it had been inspiring.

Easy to Execute and Easily Repeatable

“It’s amazing how simple it was — with Panopto, everything just worked,” said Whitlock. “Instantly, we had a repeatable and reliable process that we could use with all our team meetings going forward.”

Training other members of the team on how to use Panopto proved remarkably easy, too. “I’m an IT guy, so I can usually just look at software and figure out how it works,” commented Whitlock. “Even so, Panopto set a new bar for ease of use. I was able to train my team on the basics of live streaming and recording quickly — even our non-technical team members were comfortable working with Panopto after five minutes.”

Harper Cornell, Mizuno’s Director of Communications, took over live streaming duties from Whitlock for the second team meeting and experienced the same level of success.  “Panopto was so easy to learn,” Cornell said. “Everything was very intuitive, and it was easy for me to train the rest of the team. I trust that our monthly team meeting will run smoothly every time moving forward with Panopto.”

With the success of the monthly all-team meetings, it wasn’t long before Whitlock and Cornell began fielding questions from other teams at Mizuno, each interested in putting Panopto to work in new ways.

Whitlock and Cornell elaborated on future uses for Panopto within Mizuno:

Product Training Videos
Panopto’s ability to both record and live stream video enable Mizuno’s product teams to share vital knowledge with its field teams almost instantly. “Our products are always evolving,” Whitlock explained. “With Panopto, we can create simple video demonstrations to give our sales and support teams a better understanding of our products than was ever possible with a picture or an email.

Internal Communications
Using Panopto, Mizuno’s internal communications teams can now quickly produce and share regular company updates. “From policy changes to celebrating our team members, we can bring almost anything that is happening within our company to life through video,” noted Cornell.

Training & Development
Mizuno’s Learning and Development teams, meanwhile, have set their sights on using Panopto to facilitate training and development for the company’s team members. “With Panopto, we can use video to teach everything from quick skills to complex subjects,” said Whitlock. “And since our recordings are securely stored in our Panopto video library, it’s easy for everyone to find the lessons they need, on-demand.”

In just a few short weeks, Mizuno was able to make its all-hands team meetings more inclusive and engaging. Panopto helped bring the entire company together by making every member of the Mizuno team feel as though there were right there in the room. Now, as the company looks to video to support and scale an even wider range of communications and training activities, Panopto’s easy-to-use video platform has proven to be a smart investment for Mizuno.

Looking For Live Streaming Software For Your Business?

X
See a live overview and demo of Panopto. Spots are limited - click here to register.