The Secret To Getting More Value From Your Meetings

When you add it all up, the sheer amount of time we collectively spend in meetings today is shocking.

In the US alone, the Bureau of Labor Statistics estimates there are between 36 and 56 million business meetings held every day. On average, employees attend 62 meetings each month.

The growing prevalence of meetings has been met with no small amount of grousing — it’s not uncommon to hear meetings referred to as “productivity killers” that not only eat up prime working hours, but also force attendees to stop whatever they’re doing entirely and leave their desks to walk down to the meeting location.

Considering that the latest cognitive science tells us it can take up to a half-hour for people to get refocused and back up to working full speed after an interruption like a meeting, it’s not hard to see how attending even just a couple of meetings in a day might derail an employee’s progress on a task.

So then a question:

Why do meetings persist?

In an age of open office plans and omnipresent communications, where the average employee can instantly connect and collaborate with colleagues by email, text, messaging apps like Slack and Microsoft Teams, project tools like Trello and DropBox, note taking spaces like Evernote and OneNote, and assuredly dozens of other venues — to say nothing of just standing up and walking over to a co-worker’s desk — why do we still meet in person at all?

The answer may actually be simple.

Love them or hate them, meetings remain one of the most efficient, most effective ways for employees to collaborate and share ideas.

Every other means we have to exchange information is asynchronous — we write something out, hit send, and wait. But unless an email is answered in 5 minutes, on average, research suggests we’ll be stuck waiting for a response for the next 17 hours. In fact, at the average large company, research tells us that employees spend 5.3 hours every week waiting for information from their colleagues.

When done well (admittedly, not a given), meetings solve that problem — enabling us to achieve alignment on goals and strategies, sync on progress, troubleshoot roadblocks, make decisions, and more, without all the waiting, and without all the back-and-forth.

One Key Problem With Meetings

Meetings are by their very nature ephemeral.

A time is scheduled, attendees arrive, and they meet. Information may be exchanged, updates given, decisions made. Then at the top of the hour, everyone moves on to their next meeting or task.

Do you see what’s wrong?

We treat meetings as activities instead of resources.

It’s a nuanced difference, but an important one. Of course, the purpose of most meetings is to support activity — we meet to help the team keep moving, or to get things done. But we do all that by sharing information. And oftentimes, information exchanged person-to-person in a meeting may literally be shared nowhere else in an organization.

After the meeting ends — when it’s time to take action based on what was shared — there’s nothing to go back and reference later aside from our memories and any notes we may have taken. That leaves us (and the entire organization) with, at best, a very incomplete record of any important details we may need to revisit or reuse later.

And it only falls apart from there, because humans are wired to forget. 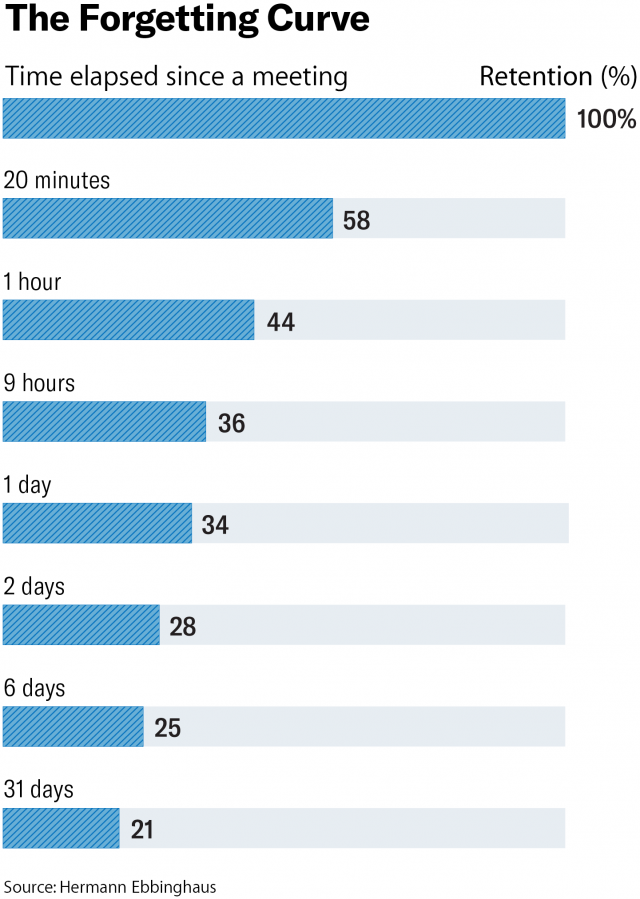 Just an hour after the meeting ends, on average, attendees will be able to recall only 44 percent of the information that was discussed. After 48 hours, that number drops to 28 percent. The teams in charge of employee training call this “The Forgetting Curve”.

Of course, human beings have been trying to beat the forgetting curve for perhaps the entirety of existence. Most of our favorite failsafes, however, are more “fail” than “safe.”

Manually-taken notes — whether informal, personal notes or formal meeting minutes — seldom capture more than a small fraction of the information discussed in a meeting, and rarely do they also capture visual aids that add context, like shared screens, presentation decks, and whiteboards.

And since the common wisdom is that active, intelligent participation in meetings is essential for anyone interested in getting noticed for that next promotion, it should be no surprise that much of the valuable information exchanged in any given meeting will go undocumented.

Which is exactly the tradeoff no organization wants.

Not having a complete record of a meeting to reference later can deliver major blows to productivity within your organization:

Add up all of that wasted time across the entire company and it’s easy to see why organizations continue to look for new ways to make meetings better.

One Solution To Improve Productivity Around Meetings

With so much of people’s days being devoted to meetings, leaders in almost every organization have begun looking for ways to relieve the strain meetings can put on productivity, and reap more of the benefits that real-time collaboration and meetings have to offer.

As it turns out, there’s a simple solution to this challenge that several Fortune 500 companies have already discovered.

So what’s the secret? Record all your meetings.

By recording meetings, you can turn the conversations your employees are already having — whether in conference rooms or on video calls — into valuable information resources that minimize the time meetings take away from your employees and maximize the impact meetings can have on your bottom line. 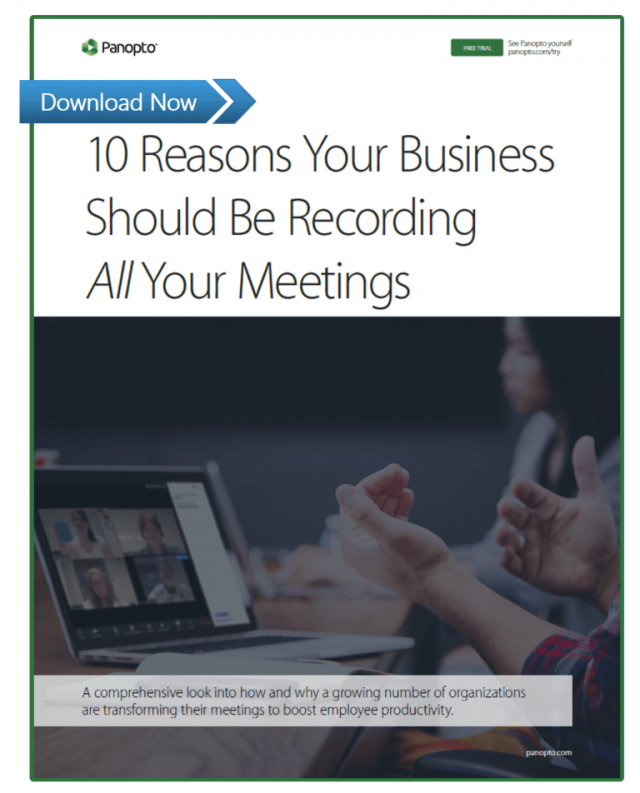 And better still, you likely already have the tools you need in order to give it a try.

All that means the only thing stopping you from creating complete digital records of any and every meeting is simply that no one has thought to press the “record” button yet.

Sound crazy? That may just be because you’ve never considered it before.

Be sure to download our latest white paper to keep reading the 10 most compelling reasons to start recording all your meetings.