Their Server Malfunctioned – But Their Panopto Lecture Recordings Still Worked

“It was Sunday in late February, right before the first midterms of the semester” recalled Chris Braster, Assistant Director of Educational Technologies at Thomas Jefferson University.

“I was sitting in my family room, enjoying a cup of coffee, when I got a text alert on my phone, informing me that the Panopto server was not responding,” Braster said. “Nothing was loading and eventually it timed out. When I couldn’t get it to come back up, I got IT on the phone and they were able to restart the server successfully. That was about 10:30 a.m.” 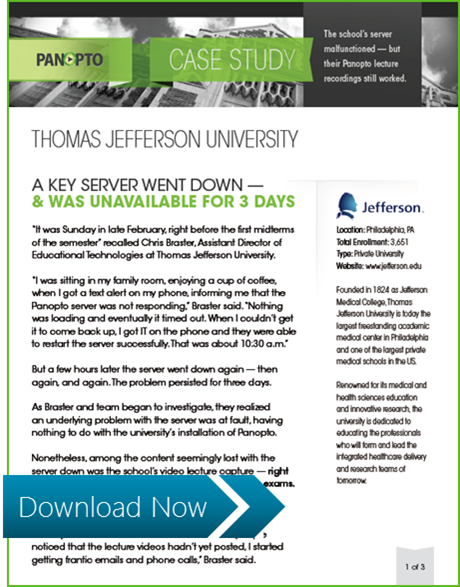 But a few hours later the server went down again — then again, and again. The problem persisted for three days.

As Braster and team began to investigate, they realized an underlying problem with the server was at fault, having nothing to do with the university’s installation of Panopto.

Nonetheless, among the content seemingly lost with the server down was the school’s video lecture capture — right when students were preparing to study for midterm exams.

By Monday Morning, Students and Faculty Were Worried

“Twenty minutes after the first class ended and people noticed that the lecture videos hadn’t yet posted, I started getting frantic emails and phone calls,” Braster said.

The concern was understandable.

Panopto’s video platform runs on any laptop, and standardizes virtually every kind of video camera — allowing faculty and students to record any kind of video, anytime, anywhere. And Panopto automatically uploads every video so that they can be watched on-demand from any laptop, smartphone, or tablet.

Students loved the system right away, according to Braster, and faculty quickly recognized the opportunity to record supplemental material to enhance lectures or provide an alternative for bad weather when the classes may be cancelled.

Today video-based lecture capture has become an integral part of the learning and teaching experience at Thomas Jefferson University. Nearly all TJU faculty members use Panopto in a variety of ways to help expand the way their students learn — recording class sessions, creating hybrid- and all-online classes, and giving students a video tool to record role-play sessions, practice interviews, and other assignments.

Panopto Kept Recording — Even While the Server Was Down

After four years, Panopto had become an essential resource at Thomas Jefferson University. And when the server malfunction cut access to a number of the school’s resources, including its lecture recordings, students and faculty immediately turned to Chris Braster and team for help.

Fortunately, the news that morning was good. In spite of the server outage, he told them, all of the lectures would still be available.

Braster explained, “Panopto records seven days out. The remote recorders receive the schedule a week in advance of the lectures themselves, then start recording at the appropriate times — even when they aren’t able to communicate with the central server.”

Panopto’s automated recording feature makes it possible to schedule and control video recordings remotely from any web browser. That remote recording tool allows schools to create scheduled recordings for recurring presentations and lectures — even to automate every lecture recording across campus for a whole semester or more at a time.

If it weren’t for Panopto and the remote recording schedule, the university would have lost 60 to 70 lecture recordings — right before exams were scheduled to take place.

“The students would have lost a lot of the information they needed to review for the exams,” Braster said.

But Panopto kept recording. And when the source of the problem was discovered and corrected, Panopto quickly uploaded all those videos to the server where students were eagerly awaiting them.

Unexpected Server Outages Happen. When They Do, Panopto’s There For Us

Despite this entire sweat-inducing experience, Braster says it isn’t just Panopto’s reliability and functionality that he appreciates.

“It’s the people,” he said. “Of the twenty-some years I’ve been here, they’re the best support team I’ve worked with. The morning after our server went down, I called Panopto at 8 a.m. and talked to Doug Costain. Because I had opened a support ticket the night before, Doug told me that he was already working on it.”

“Besides the fact that they’re just nice people, they’re genuinely dedicated to getting things done and done right,” Braster continued. “I don’t need support very often with Panopto, but when I do, it’s always a great experience.”

While the Panopto system helped Thomas Jefferson University through a would-be disaster that week, students and faculty know that ultimately it’s the way Panopto has improved the day-to-day learning experience at the school that matters the most.

“People here couldn’t imagine being without Panopto,” Braster concluded. “And I can see why. I wish we would’ve had something like this when I was in school.”

Is your lecture capture technology ready for the unexpected?

Panopto can help you rest easy, with video recorders that still work, even when servers malfunction. To try Panopto for yourself, contact our team to request a free trial today.