As a weather pattern it was of course familiar, but beyond the describable facts — during particularly harsh rains, bright streaks of light from the heavens occasionally cross the sky, usually incinerating whatever they happen to strike — understanding of the phenomena was sorely lacking. The science of the event was still exceptionally new, and that which was known hadn’t been well-shared. As a result, most people just believed lightning was whatever supernatural force they’d been told it was (Zeus sending messages has always been our favorite).

In the early 1750s, Franklin had begun to study of the science of electricity — a force at the time that was still quite poorly understood even by those in scientific fields. A handful of early authorities on the subject had come to believe lightning was, in fact, an example of electricity in action, and Franklin came to agree with their case.

Franklin, however, wasn’t content to simply believe the claim — he wanted to test it, and if correct, to share that knowledge with the world.

This week marks the 263rd anniversary of the now-famous experiment Franklin (may or may not actually have, depending which historian you consult) conducted to establish the electrical nature of lightning. During a rainstorm at his home, Franklin and his son flew a kite with a key (serving as lightning rod) and Leyden jar (the earliest form of a capacitor) attached to the string. Whether the kite was actually struck or just charged by the nearby electrical activity, the experiment enabled Franklin to demonstrate the electrical nature of lightning.

Satisfied he had proven the claim, Franklin then took one last important step his predecessors hadn’t — he went public. Franklin presented the story of his experiment in newspapers and journals, most notably his famous Poor Richard’s Almanack — taking advantage of the most popular medium of his day to ensure that what he had learned could be shared widely and inform as many people as possible. The science of weather would still have quite a lot to learn after 1752, but after that date, it’s safe to say that thanks to Franklin, at least most people understood what exactly those streaks of light in the sky were.

Of course today, Franklin would have the power to share his experiment even more directly — and make sure that any would-be doubters could see what they’d need to believe. Today scientists, academics, professionals, and others rely on the same philosophy of experimentation Franklin put to use, and make sure their findings can be presented in full by recording and sharing events with video. Whether it’s brand-new R&D, tried-and-true sales demos, or even simple classroom labs, video makes sure that everyone can see exactly what was demonstrated — anytime, anywhere, in high-definition. 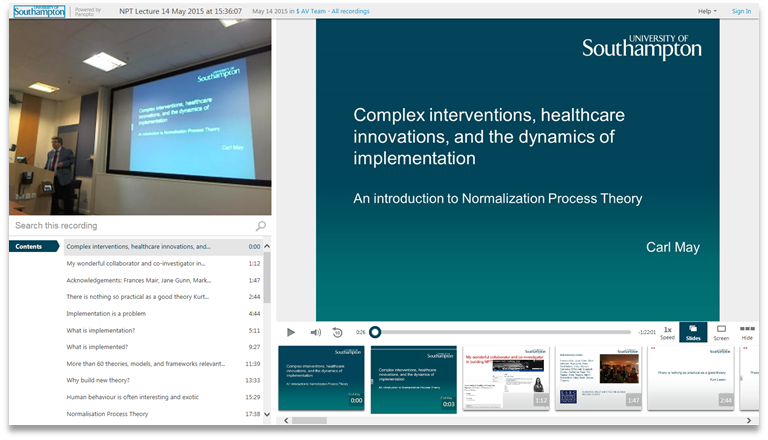 Complex Interactions, Healthcare Innovations, and the Dynamics of Implementation
Implementing and evaluating complex interventions, new technologies, and business processes in healthcare is complex and demanding. Innovation promises better ways of organizing and delivering treatment, improvements in the clinical and cost-effectiveness of services, and reductions in the burdens of illness – especially chronic illness. Researchers try to help healthcare providers by quantifying outcomes and comparing the effects of these innovations. Normalization Process Theory is an explanatory model that helps managers, clinicians, and researchers understand implementation and integration, focusing on the dynamic processes that lead to innovations becoming embedded in everyday work. Join Carl May for this recorded guest lecture as he shares this complete introduction to Normalization Process Theory at the University of Southampton. 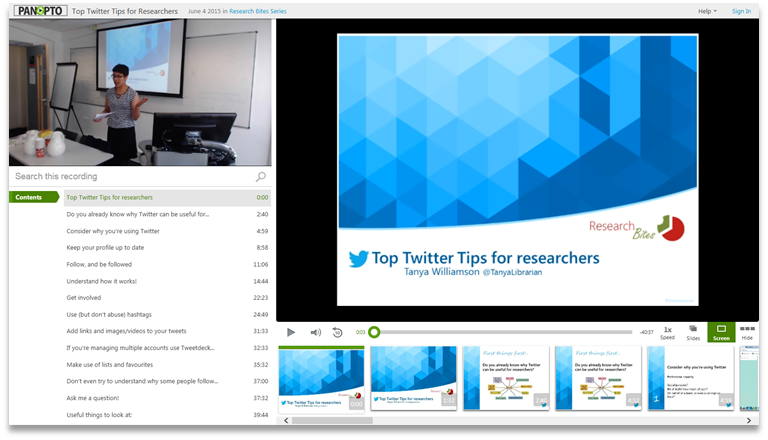 Research Bites — Top Twitter Tips for Researchers
Research Bites are short, informal sessions aimed at the research community at Lancaster University, which includes postgraduates, research students and staff. The aim is to deliver useful information, start discussions and answer questions for the benefit of anyone conducting research. The theme for the month of June is social media, and this week’s presentation examines how Twitter can provide value to research work. Tanya Williamson, Assistant Librarian at Lancaster University, shares these ten tips to help make Twitter worth your while in this smart video. 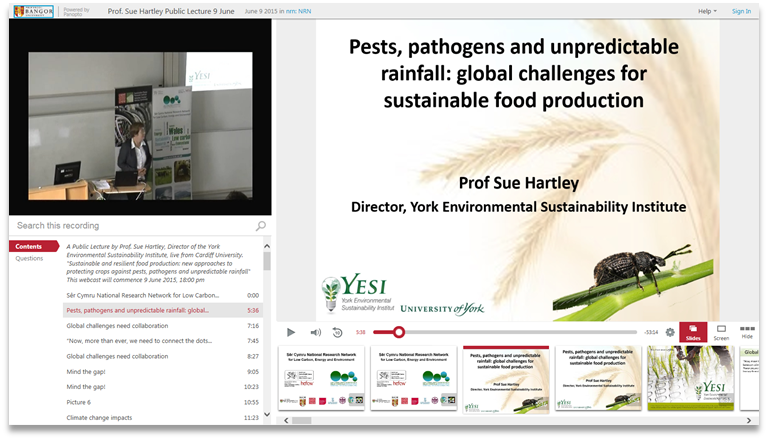 Pests, Pathogens, and Unpredictable Rainfall: Global Challenges for Sustainable Food Production
Feeding a growing population in a warming world, whilst protecting biodiversity and the services it provides, will require innovative thinking, unprecedented cooperation between countries and academic communities, and a willingness to cross the boundaries between disciplines. Food production is compromised by the pests and diseases which attack our crops and is increasingly threatened by unpredictable and extreme weather. Globally around one third of food production is lost to pests, even with the use of pesticides and other modern methods of crop protection. Given the projected increase in demand for food (up to a 70% increase by 2050 according to the UN) and the impacts of climate change on the spread and abundance of pest species, we urgently need new ways to protect our crops make them more resilient to climate change. Join professor Sue Hartley, Director of the York Environmental Sustainability Institute, for this talk exploring a number of inter-disciplinary approaches which may provide these new sustainable methods of crop protection and resilience, based on capitalising on the natural defences our crop plants have to these stresses. 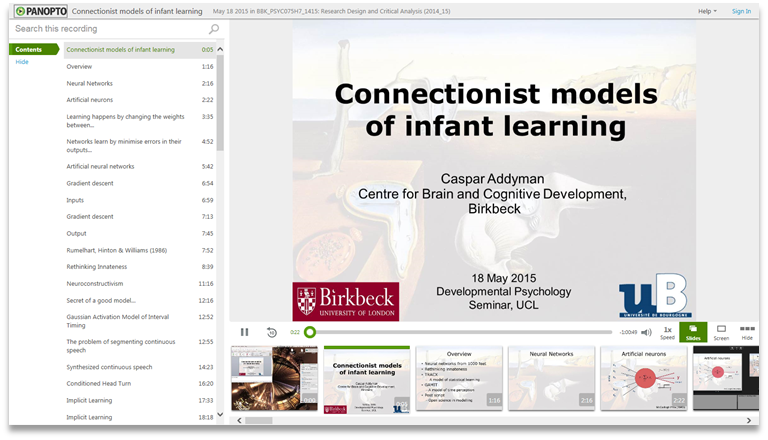 Connectionist Models of Infant Learning
Starting with zero knowledge of the world, infants must largely figure things out for themselves. Despite this their abilities can develop quite rapidly, from very basic beginnings to reach near adult-like levels in just a few years. This continually moving target makes it difficult to provide comprehensive theories of infant learning. In this recorded seminar, Dr Caspar Addyman of the Centre for Brain and Cognitive Development at Birkbeck, University of London, argues that connectionist models are particularly well suited to this task, and can provide principled quantitative description of different stages of learning culminating in adult-like performance. 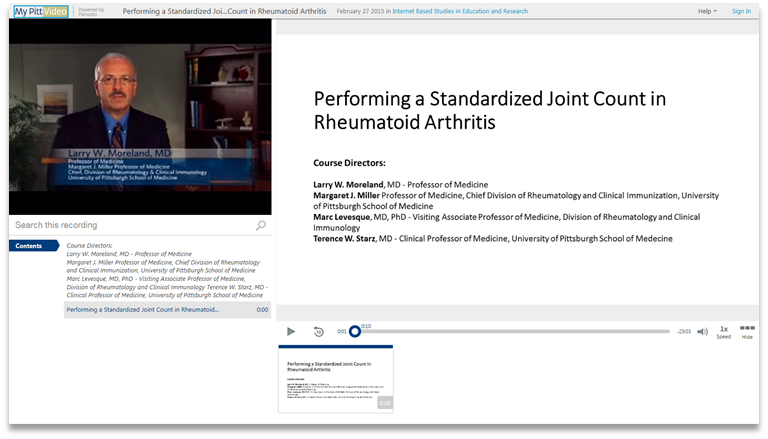 Performing a Standardized Joint Count in Rheumatoid Arthritis
Join the University of Pittsburgh for this video featuring DR Larry W. Moreland, MD, Professor of Medicine, as Dr Moreland introduces how to perform a standardized joint count for patients with rheumatoid arthritis (RA). For physicians, assessing the tenderness of swollen joints may help improve treatment recommendations, by helping to draw a distinction between reversible synovial inflammation and irreversible structural joint changes. With reversible inflammation of the joint, there is a greater probability that medications will lead to functional improvements. Alternatively, when irreversible structural changes have occurred, occupational therapy probably is the best way to improve function.