“I would never read a book if it were possible for me to talk half an hour with the man who wrote it.” –Woodrow Wilson

Leading his nation as the full effects of the industrial revolution were at last becoming keenly visible to all, Wilson was among the first to see many important changes and evolutions that would come to shape a modern society.

Wilson saw the need for diplomacy on an international level, holding fast to neutrality throughout the early days of the first world war, then laying out his famous Fourteen Points for peace and championing the League of Nations at the close of the fight. In 1919, he was awarded the Nobel Peace Prize for his ideas.

Wilson saw the need for women’s rights, spending years calling for states to extend voting rights to women. When given the chance to secure those rights at the national level he endorsed the 19th Amendment to the US Constitution wholeheartedly, contributing to its final passage in 1920.

And Wilson saw the growing need for regulation in a newly modernized economy. Under his stewardship, the US would pass the Federal Reserve Act, the Federal Trade Commission Act, the Clayton Antitrust Act, the Federal Farm Loan Act, and the country’s first income tax meant to rein in the exorbitant wealth of the era’s newfound titans of industry. During his presidency, Wilson saw the need to impose an 8-hour workday for railroads, setting the modern standard for every workplace.

An accomplished scholar with a PhD, Wilson was a voracious learner. But if his comment above is any indication, Wilson saw the value of another idea too — that often the most effective way to learn isn’t sifting through text alone, but through what’s now called “active learning.” Hearing from an expert, watching a presentation, asking questions, having a discussion — these are the activities that helped people from every generation learn new information more efficiently and explore ideas in greater depth. In Wilson’s day it was an academic luxury so uncommon even presidents would have pined for it. Today, however, that’s no longer quite the case.

Today technology exists to supplement the information we share in almost innumerable ways. Chief among these new tools is video, which in just over a decade has gone from the occasional add-on to a core feature of the modern classroom.

With just the click of a “Record” button, today’s teachers and experts can provide exactly the presentation that President Wilson had asked for. They can record classrooms and flip lectures, sharing insights alongside their textbooks. And they can rely on those recordings to then open more time during class sessions for interactive discussion and deeper learning. It’s an improvement Wilson was never fortunate enough to experience — but one that, given the newfound prominence of video-based learning tools on campus, Wilson’s soon-to-be successors will have relied in their own efforts to see the world for what it is and what it could be.

This week we saw more and more people taking advantage of the power of video to share ideas, discuss information, and make a statement. And in the spirit of passing it on, these are just a few of the ideas shared this week with Panopto’s video presentation software. 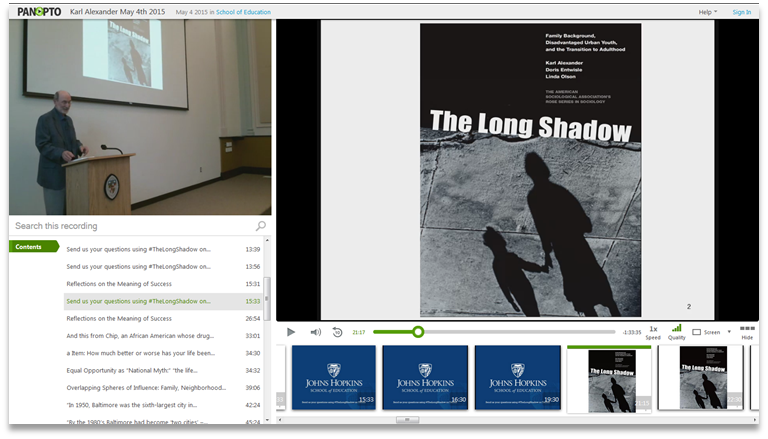 The Long Shadow: Family Background, Disadvantaged Urban Youth, and the Transition to Adulthood
In a groundbreaking study, Johns Hopkins sociologist Karl Alexander followed nearly 800 Baltimore schoolchildren for a quarter of a century, and discovered that their fates were substantially determined by the family they were born into. Through repeated interviews with the children and their parents and teachers, the research team observed the group as its members made their way through elementary, middle, and high school; joined the workforce; and started families. In this keynote lecture, Alexander discusses the findings of his new book, the fourth and final one culled from the project’s data, detailing how the children’s first years of life ultimately colored their success as adults. 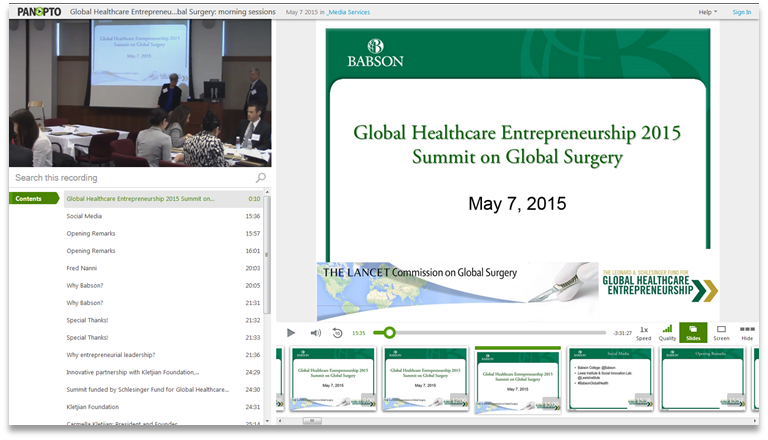 Global Healthcare Entrepreneurship Summit
Join Babson College for this one-day symposium event, highlighting several of the teaching cases developed by the college for the Lancet Commission on Global Surgery. Faculty from Harvard and Babson lead participants through case discussions to review best practices for improving access to and quality of surgical care worldwide, and discuss how to develop sustainable systems for low-resource countries. Additionally, the group considers further applications for the case series along with the training of surgeons and healthcare managers involved in Global Surgery. 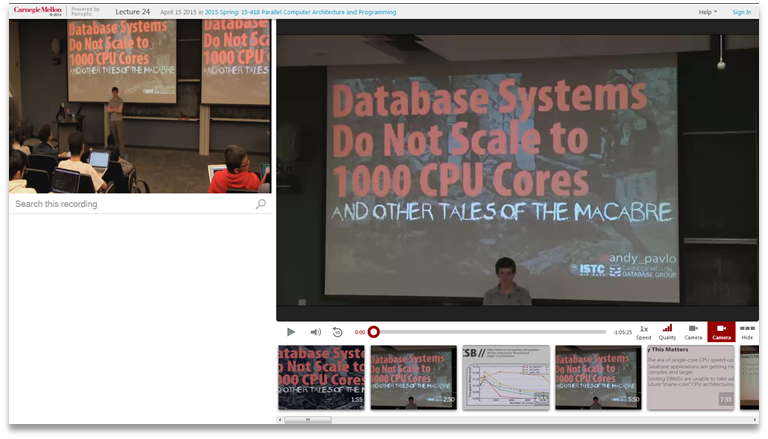 Database Systems Do Not Scale to 1000 CPU Cores and Other Tales of the Macabre
As we move towards an era dominated by “many-core” machines with hundreds of cores on a single chip, a new scalability dimension arises that current database management systems (DBMSs) were not designed for. Thus, DBMSs will be unable to support the larger and more complex data intensive applications in the coming years. To better understand just how unprepared DBMSs are for these future CPU architectures, in this talk Andy Pavlo, Assistant Professor in the Computer Science Department at Carnegie Mellon University, presents an evaluation of concurrency control algorithms for transaction processing workloads on many-core chips. His analysis using a thousand core CPU simulator shows that today’s most widely-used algorithms fail to scale to this magnitude. In each case, he identifies fundamental bottlenecks that are independent of the particular database implementation and argue that even state-of-the-art DBMSs suffer from these limitations. Pavlo concludes that rather than pursuing incremental solutions, many-core chips may require a completely redesigned DBMS architecture that is tightly coupled with the hardware. 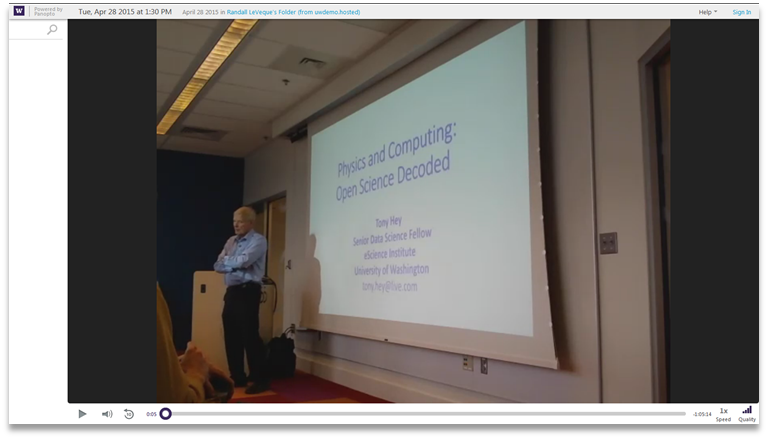 Physics and Computing: Open Science Decoded
Join University of Washington Senior Data Science Fellow Tony Hey for this talk opening with the OSTP memo on open access, then discussing executable papers and best practice for reproducibility of computational physics research. After looking at computing for Big Physics (such as the ATLAS collaboration at the CERN LHC), for Medium-scale Physics (with the UK’s Collaborative Computational Projects), and for Long Tail Physics, Hey’s presentation ends with detailed comments about open source, scientific software quality and career paths for scientific software developers. 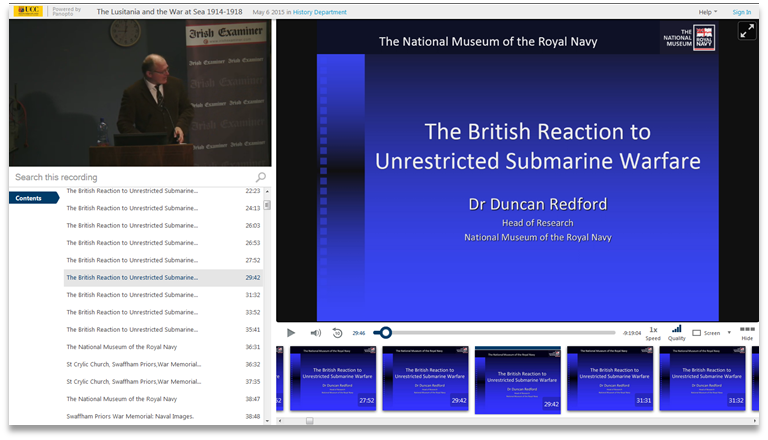 The Lusitania and the War at Sea 1914-1918
Join the School of History at Ireland’s University College Cork for this conference on the sinking of the RMS Lusitania and its role in bringing the United States into the first World War. The Cunard liner with 1,959 passengers and crew on board, was torpedoed 18 km off the Old Head of Kinsale on May 7th 1915 by the German U-boat U20 while en route from New York to Liverpool. The sinking of the liner is widely viewed as having played a significant part in the decision of former US president Woodrow Wilson to intervene in World War I on the side of the Allies in 1917.