Flexible Lecture Capture with Amazing Support: Why The Wharton School Switched to Panopto 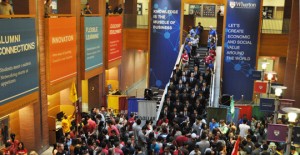 When The Wharton School opened Jon M. Huntsman Hall on the campus of the University of Pennsylvania in the summer of 2002, they unveiled a building that had been designed to deliver a truly modern learning experience. Among the many new learning technologies the school would support was state-of-the-art lecture capture, with video-enabled lecture halls that could record and share the classes taught by Wharton’s world-class faculty.

Yet even as the building began hosting its first classes, Wharton’s faculty and learning technology staff continued to identify new and greater opportunities to utilize technology to enhance their students’ learning experiences — and in the process, quickly began discovering limitations in their once best-in-class video solution.

Over the following several semesters, the Wharton team continued to push both themselves and their lecture capture vendors to fully support the school’s goal to provide comprehensive modern lecture recording capabilities — but time and again found the features they wanted simply weren’t available, and the support they needed couldn’t be found.

Experiencing the Challenges of Lecture Capture as an Early Adopter

When Huntsman Hall opened in 2002, The Wharton School was excited to introduce its students to a cutting-edge technology-enabled study aid — lecture capture. 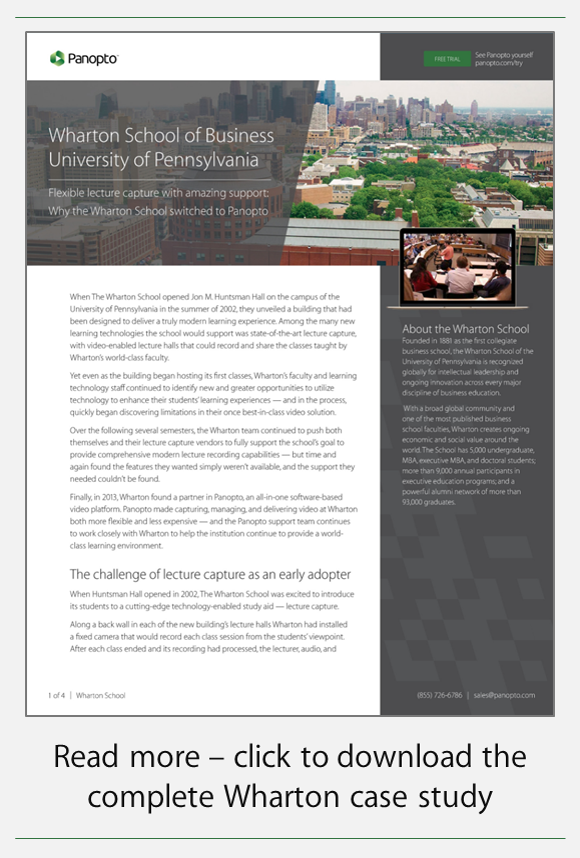 Along a back wall in each of the new building’s lecture halls Wharton had installed a fixed camera that would record each class session from the students’ viewpoint. After each class ended and its recording had processed, the lecturer, audio, and the projection screens at the front of the class would all be available for students to rewatch and study.

Especially for early adopters of lecture recording technology, it wasn’t an uncommon setup — but it was also one with a number of drawbacks. The single-source video recording could only capture video in low-fidelity, meaning any time the presenter wrote on the whiteboard or had a white background on their PowerPoint slide, the whole image was illegibly bright. Nor was the system flexible — the fixed stationary cameras could only provide a back-row view of the classroom and added little more to the learning experience.

Still, students valued the lecture recordings and The Wharton School was keen to improve upon what had clearly been a worthwhile first step. After several years of working with their first lecture capture solution, Wharton’s Classroom Technology staff made the move to another hardware-based lecture recording system that promised greater flexibility.

First among the challenges was simple availability. The specialized hardware and servers required meant increased costs, which in turn meant Wharton could only deploy the new technology in a limited number of rooms. Many faculty members, excited to use the new system, instead found that the room they were teaching in wouldn’t have the new service available.

And while at first faculty in the newly-equipped classrooms were pleased with the system’s improved flexibility, in the semesters that followed many soon discovered the new recording solution didn’t quite support all the ways they wanted to use video in the classroom.

From Hardware to Software:

Throughout the school’s early experiences in supporting lecture capture, The Wharton School’s Public Technology team took a proactive role, working closely with the school’s lecture capture vendors to share constructive criticism, bug reports, and feature requests. As they did, the team came to find that while the technology itself was important when it came to lecture capture, it was the level of support provided for that technology that was most valuable.

In order to innovate at the pace they wanted, the school needed a partner they could trust; one that would work with them side-by-side to deliver a high-quality experience. And according to Jimmy Lieu, Director of Information Technology at The Wharton School of the University of Pennsylvania, that’s when the school discovered Panopto.

Initially, Wharton was attracted to Panopto for its flexible, software-based video platform. With Panopto, the school would be able to produce and manage its lecture recordings from any desktop PC, using the video recorders of their choice — a welcome change from the specialized servers and media equipment required by past solutions.

Relying on standard PCs, Wharton’s IT staff could have Panopto installed in every classrooms they chose, and could add a classroom at any point whether for a day or the rest of the semester. That meant that no professor who wanted lecture capture would be left out.

Better still, scheduled remote recording — all managed centrally in the Panopto platform by the school’s Public Technology department — meant that professors needed only to walk into the lecture hall at their regularly scheduled time, open their slide presentation, and give their lecture as usual. Panopto automatically took care of producing and uploading the video and the professor didn’t need to do anything to make sure the lecture was captured flawlessly. Even if the professor did not schedule a remote recording, they still had the ability to start a recording from the touch panel in the classroom.

Relying on software instead of hardware, Panopto also meant staff supporting lecture capture could make their own technology choices. Wanting to deliver the very highest caliber lecture capture, Wharton had opted to build their own PCs with high-end video cards. This approach not only allowed the IT department to save budget over buying proprietary media racks, but meant that most any malfunction could be solved by simply swapping out a computer — a process made all the easier with Panopto, which enables system administrators to monitor every classroom’s lecture recording system status in real time from any web browser.

Remote recording also allowed the IT staff to limit access to the capture computers, delivering a more reliable service for their faculty. Freed from the need to have technical staff present for each lecture to be captured, Wharton was able to secure their mission-critical computers. This eliminated the guesswork for IT who could trust that Panopto was running in a stable and secure environment.

While initially Wharton was interested in how Panopto’s technology may help the school achieve its vision of producing lecture video that truly captured the classroom experience, the school soon found that Panopto’s support is what sets the video platform apart from others.

Early in the rollout of the school’s custom high-end video capture cards, the Public Technology team was disappointed to find the cards were experiencing buffering issues that led to a noticeable decrease in playback quality. The Panopto team worked hand-in-hand with Wharton to identify the source of the issue, and developed custom code that Wharton could apply to make sure the issue was resolved. Panopto then later rolled the fix out into production.

When Wharton’s Courseware team made the switch from its old learning management system (LMS) to Instructure Canvas, the Wharton team was happy to find the move also created a preferred method of delivering Panopto videos. Panopto integrates seamlessly with Canvas, meaning that Wharton could add lecture recordings to class websites alongside other course materials. And with single sign-on integration (SSO), access to the right videos for any given student was handled programmatically, eliminating the need for course administrators to independently manage content permissions and the hassle for students to remember passwords to two different portals.

Panopto’s support team continues to work closely with the Wharton team. “There are so many products out there that promise great capture,” said Lieu. “But no other solution delivers support and management like Panopto.”

With lecture capture now available in every classroom and the system confidently managed by the Public Technology team, Wharton’s world-class faculty began to find Panopto could help them produce a higher-quality recorded lecture experience than ever before.

With the school’s previous hardware-based capture solutions, Wharton’s faculty had been able to record only a limited number of sources. That often meant tough choices for what was recorded and what wasn’t, and resulting videos that paled in comparison to the actual in-classroom experience.

With Panopto’s ability to record a virtually unlimited number of video sources, from cameras to screen recordings to slide presentations, there was no need to make compromises to capture all of the lecture content — every facet of the classroom could be captured in full. No longer did students have to strain to read writing on a whiteboard, or have to miss close up demonstrations. Now, everything was available in high definition.

From Lecture Capture to the Flipped Classroom and More

With Panopto taking the legwork out of capturing and delivering a high-quality recorded lecture experience, faculty and staff at Wharton were freed up to look for new ways to provide students with innovative classroom learning experiences.

Though Panopto had been deployed in the classroom in a way that minimized the need for professors to engage in the capture of their lectures, it also offered Wharton’s faculty and support staff an unprecedented flexibility to experiment with video as a newer medium for delivering education.

Professors in marketing and operations management, wanting to foster better engagement in the classroom, started leveraging Panopto to “flip” their classrooms. Using the Panopto desktop recorder on the computers in their offices and homes, a handful of Wharton professors began recording short pre-lecture videos for their students. By sending these videos to their students before the scheduled class time, instructors were able to deliver traditional lecture content in an easy-to-consume form. In this way, students could watch and engage with the content at their own pace, prepare questions, and have a foundational understanding of the day’s subject matter before even walking in the door. In turn, that meant Wharton’s professors could use the in-class time for interactive learning, active discussion and debate, and taking a deeper dive into complex material.

After more than a decade of experimentation to pursue their vision, Wharton has finally found in Panopto a solution for faithfully reproducing the classroom experience on video. With great lecture capture and video content management, Wharton has been able to capture more classes in higher fidelity, with less hardware and greater control over the process. Panopto has enabled the Public Technology department to deliver outstanding lecture capture services to their faculty and students while reducing the strain on both their budget and their time. And as a bonus, Wharton has also been able to leverage the same tools used for lecture capture to expand their teaching methods into the flipped classroom model.

In service to a leading business school, the Public Technology team at The Wharton School are always two steps ahead. Not only do they accept the rapid pace of change in educational technology, but they do everything in their power to push the needle ever forward. Knowing that faculty and students needs will continue to evolve, Wharton chose a lecture capture vendor that would go above and beyond in both innovation and support, and become a true partner in advancing education.