This is the third of 3 posts examining the WIMPi Project at Eastern Michigan University and their experience with classroom technology and blended learning: 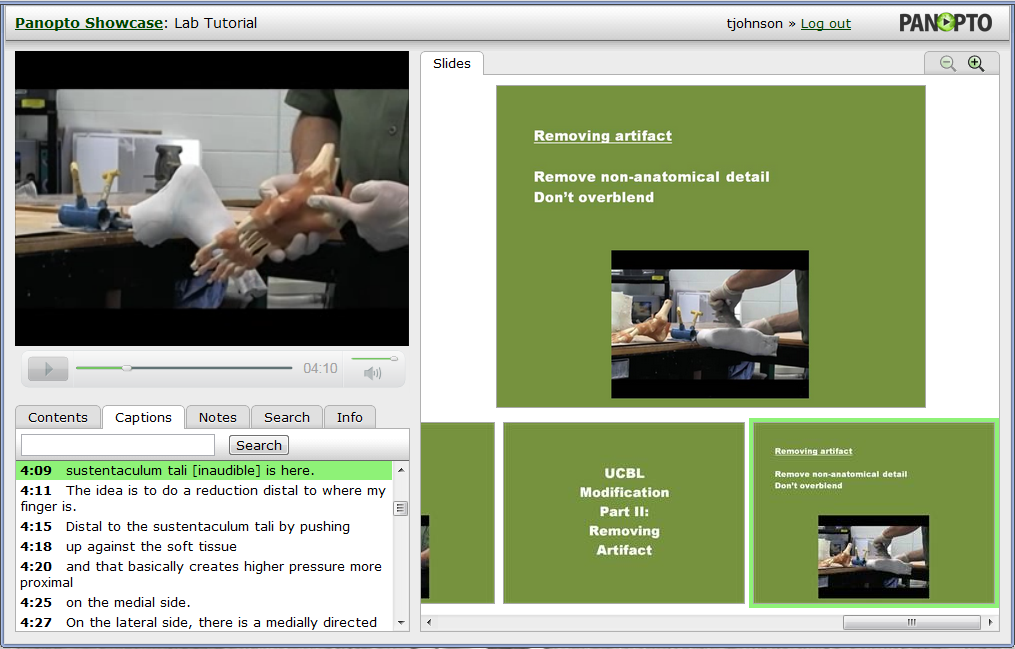 Click the image above to launch the video demonstration
Frank J. Fedel, Director of the WIMPi project at EMU (explained in Part 1), began using Panopto in August of 2009 and swiftly became proficient at recording lectures. Assigning lectures for pre-class viewing was the first step the WIMPi team took toward flipping their classes. The following semester, Professor Fedel initiated the second step.

In order to transition more one-way communication out of his classroom, Fedel began recording practical demonstrations and laboratory preparation exercises for his students to view out-of-class. The results were immediate and predictable: better student performance in the laboratory and more time for interactive, student-focused learning activities in the classroom. Fedel also broadcast a recording of his first remote guest speaker (a colleague from another program) who immediately elected to incorporate Panopto into his own teaching after seeing how it could expand his geographic reach.

Professor Fedel has had remarkable success using Panopto to improve the quality of his students’ lab work. “Students practice at home before they get to lab. When they come into the laboratory, they’re much more proficient at what they’re doing because they’ve already seen it done. I give them practice exercises they can do at home, and they can replay the demonstration as often as they need.”

The EMU Orthotics and Prosthetics program is moving toward the use of Panopto for all of its courses, with both instructors and students creating recordings. Professor Fedel made it a requirement of every student in his classes to create at least two recordings per semester, which will remain in their digital portfolio as evidence of their performance. [Subsequent releases of Panopto include student drop boxes, which combined with the recording features in Panopto’s iOS app, are certain to make this workflow even easier].

In addition to student recordings, the Graduate Orthotics and Prosthetics program has begun using Panopto to test their candidates’ competence in a range of acquired skills. This video documentation of proficiency will also remain in the students’ digital portfolios for use on the job market and later in their professional careers.

With the implementation of student recording and proficiency documentation, Frank J. Fedel and the WIMPi project have come full circle in some important ways. They have successfully flipped from lecture-heavy classes with a preponderance of one-way communication, to interactive classes with both faculty and students creating digital resources for the future development of EMU students. Professor Fedel’s current project is the technical integration of Panopto into his laboratory for recording experimental progress of new orthotic designs, which will no doubt be worthy of its own case study.