Flipping the Classroom with Panopto at Eastern Michigan University

The “flipped classroom” has garnered a great deal of attention in recent years. Also known as “reverse instruction,” a flipped class generally assigns recorded lectures for out-of-class viewing, in order to free up the classroom for more interactive, student-focused learning activities.

The WIMPi project at EMU utilizes Panopto for two basic purposes: to flip classes by limiting one-way instruction inside the classroom and to document student progress through the program. WIMPi professors use Panopto to deliver online lectures for class preparation and review, prepare students for lab work, document acquired competencies, and record multimedia student assignments.

Frank J. Fedel, an Assistant Professor in the Health Promotion and Human Performance department at Eastern Michigan University, first introduced Panopto into his classroom to address a basic pedagogical problem: a lack of time.

“Students are with you for a limited time, so how do you make the best use of that time? It occurred to me that providing information to students doesn’t necessarily require a two-way interaction,” recalls Fedel. “Take the case of textbooks and video. Are lectures fundamentally any different?”

Fedel and his colleagues at EMU became intent on flipping their classrooms by moving one-way communication outside of the classroom and reclaiming that precious time for group discussions, collaborative projects, and practical demonstrations. Professor Fedel soon realized that this approach would solve another persistent problem with traditional lectures.

“Students don’t all learn at the same rate…and we can’t adjust the pace of our live lectures to accommodate the entire range of student abilities. Having a recorded version allows students to control the presentation themselves and learn at their own pace.” 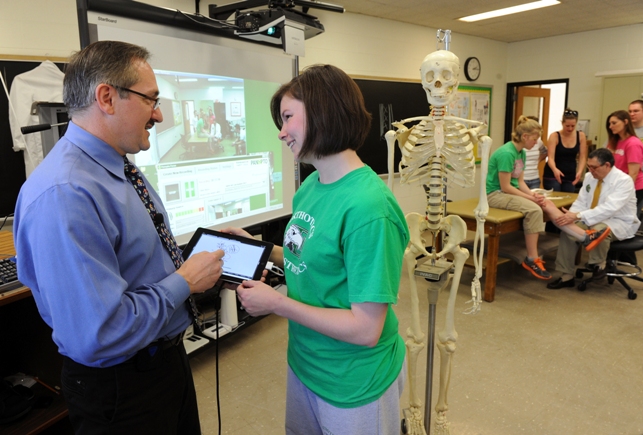 Professor Frank J. Fedel using Panopto with an iPad in the classroom

Professor Fedel knew that lecture capture would be central to flipping his classroom and making his courses more personalized and interactive, but his ultimate vision was far more comprehensive. Fedel sought to leverage a variety of classroom technologies to create a learning experience unrivaled in any classroom. He envisioned a virtual classroom that would be “technologically savvy, collaboratively intelligent, and fun to use.”

This combination of WIMPi technologies results in three basic efficiencies that create the groundwork for a more interactive student experience:

Lecture capture is a fundamental part of the WIMPi classroom, but founding WIMPi instructors Frank J. Fedel and Jim Sweet wanted more out of their media capture solution than just in-room recording. After a good deal of exposure to other systems, the WIMPi team selected Panopto based on three basic requirements for media capture: “Panopto is reliable, flexible and easy-to-use,” remarks Fedel. “It simply works.”

They found Panopto’s ease-of-use particularly attractive, because it allowed them to bring on new team members with minimal training. Fedel was also impressed with the stability of the product, having experienced reliability issues with other systems. But in order to achieve the radical reduction in one-way classroom instruction that Fedel and Sweet originally envisioned, they needed the ability to record course material at their convenience, outside of the classroom. “Panopto met our need for recording flexibility,” recalls Fedel. “As a software-based solution, it can be used with just about any hardware configuration—including laptops, tablets and smartphones– which makes it incredibly portable.”

An unforeseen benefit of their decision was the high caliber of Panopto’s support team. Fedel recalls, “I have enjoyed all of my interactions with your technical staff, particularly your Chief Support Engineer, Dave Hannan. I am continually impressed by Panopto’s willingness to integrate customer suggestions into product development.”

Fedel initially implemented Panopto within his own department, Health Promotion and Human Performance, in classes for potential nursing students. The following year he expanded use to include EMU’s Master of Science program in Orthotics and Prosthetics, and instructors from Athletic Training, Exercise Science, History and Biology all began researching Panopto integration for their programs. Currently one program uses Panopto exclusively for online courses while another uses Panopto for every lecture given in the department.

Professor Fedel and his colleagues at EMU are now able to reuse recorded lectures from past semesters as out-of-class viewing assignments for current students. They can also create supplementary material at will, insuring that classes remain flipped and focused on more personalized, interactive activities.

Fedel recalls a significant uptick in viewing hours from the first semester he used Panopto to the second and beyond. “Former students still revisit previous class lectures, presumably to help them review for subsequent classes,” he suggests. “More than a few students have mentioned that that they felt more secure and confident having the lecture recordings available as a resource throughout the semester. Many have asked for the capability in all of their classes.”

Fedel has noted an additional critical marker of success: “I have anecdotally noticed a real difference in the classroom presence of my students after including the lecture capture option,” he confides. “They’re asking more sophisticated, in-depth questions during discussions.”

Professor Fedel has had remarkable success using Panopto to improve the quality of his students’ lab work. “Students practice at home before they get to lab. When they come into the laboratory, they’re much more proficient at what they’re doing because they’ve already seen it done. I give them practice exercises they can do at home, and they can replay the demonstration as often as they need.”

The EMU Orthotics and Prosthetics program is moving toward the use of Panopto for all of its courses, with both instructors and students creating recordings. Professor Fedel made it a requirement of every student in his classes to create at least two recordings per semester, which will remain in their digital portfolio as evidence of their performance. Subsequent releases of Panopto include student drop boxes, which combined with the recording features in Panopto’s mobile apps, have made this workflow even easier.

In addition to student recordings, the Graduate Orthotics and Prosthetics program has begun using Panopto to test their candidates’ competence in a range of acquired skills. This video documentation of proficiency will also remain in the students’ digital portfolios for use on the job market and later in their professional careers.

With the implementation of student recording and proficiency documentation, Frank J. Fedel and the WIMPi project have come full circle in some important ways. They have successfully flipped from lecture-heavy classes with a preponderance of one-way communication, to interactive classes with both faculty and students creating digital resources for the future development of EMU students. Professor Fedel’s current project is the technical integration of Panopto into his laboratory for recording experimental progress of new orthotic designs, which will no doubt be worthy of its own case study.