Live Illustrating Thoughts From Our ‘Innovation with Video’ Conference

As part of our recent ‘Innovation with Video’ conference, artists from Creative Connection live illustrated the key themes covered across the sessions. 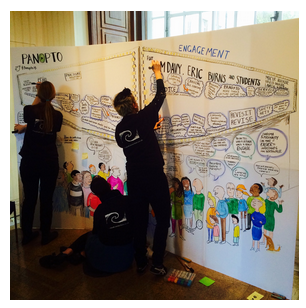 Picking up on insights from the morning agenda, their mural also incorporated ideas, questions and queries submitted by delegates. The resulting artwork visually represents the content covered by Panopto EMEA’s CEO Tom Davy and Panopto’s Founder and CTO Eric Burns, as well as views from our keynote speaker David White, insights provided by the students and academics who participated in the two discussion panels held on the day and, of course, views from attendees.

We wanted to take this opportunity to highlight some of the parts of the mural that encapsulate key learnings from the event and share them with you, along with a time-lapse video of the team creating the final boards. 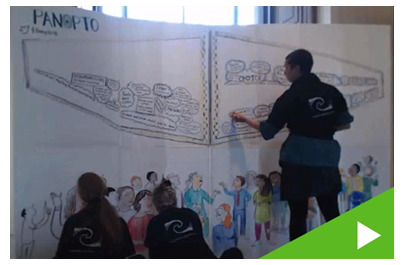 ‘New ideas – what’s the lecture FOR? Enthuse the students’

A key point raised by Dr Jeremy Pritchard in the academic discussion panel centred on the need to reposition the lecture as an inspirational tool to enthuse students. Video technologies are enabling this to take place by allowing didactic learning to happen outside the lecture hall, freeing up face-to-face time for more interactive or in-depth work.

This idea built on comments from David Morris, VP Education at Newcastle University’s Student Union. David, a recent law graduate, talked about the way in which the lecture recording allowed him to focus on listening more attentively during the live session, knowing that he could go back to the recording to complete his notes afterwards. He also commented that rather than nudging the person sitting next to him to see if they’d written down notes on a key point, he could just concentrate on the words the lecturer was saying, knowing it was all available later. In this way, lecture recording is seen more of an enhancement to the live experience, rather than as a replacement.

Eric Burns summed this up when he said that despite all of the technological developments at institutions over the years, ultimately ‘bricks and mortar emerge stronger’. And in the words of one delegate whose idea was captured on the mural: ‘this is about pedagogy and keeping it LIVE’.

The idea of presence was mentioned in most of the morning sessions, and this theme recurs many times throughout the Creative Connection mural. 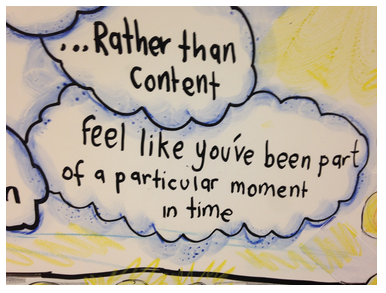 Keynote speaker David White talked introduced the concept of ‘eventedness’ in his presentation. He pointed out that people are still highly compelled by the idea that they can be part of a collective experience that takes place at a specific moment in time. This is in spite of (or perhaps in reaction to) the culture of on-demand viewing that digital channels have arguably fostered. Events, he suggested, create a sense of belonging and connection, which helps to re-humanise the digital. He said that universities which focused on online tools as a means to move content around effectively were ‘holding their students at arm’s length’ and risked alienating them.

Engagement is the critical missing piece of the puzzle and video lecture capture can help provide that sense of connection. This was backed up during the student panel, with all of the students agreeing that they were more interested in reviewing the lecture when they knew they had attended. Some were even specifically listening out for their answers, or those given by their friends, to add ‘entertainment value’ to the lecture recording. Two of the students also felt more connected to the content when they could see the lecturer, not just hear them. To sum up this up from the perspective of one attendee whose views were captured on the board: ‘Connectedness – scary for lecturers but worth it’.

‘…my friends had it for all of their lectures’ 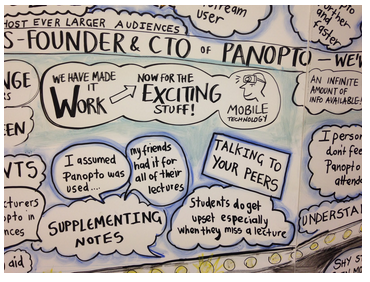 Another idea that made it onto the board was a student comment about their friends having access to lecture recordings when they didn’t – an issue that the academic panel described as ‘equity of provision and continuity’. Panopto’s Tom Davy also mentioned this in his introductory talk, saying that while lecture capture is now a mainstream concept, uptake is still relatively small-scale at most institutions.

The students made many comments about how initial first year experiences of lecture capture gave them an expectation it would be available for all their modules. When this proved not to be the case, this caused confusion and a sense of dissatisfaction.

As well as picking up on some of these overarching themes, the mural also provided a space for delegates to talk about things coming up on the horizon, not just issues and opportunities faced in the here and now. Some delegates added forward-looking comments and questions into the mix, such as: ‘How will Panopto embrace wearable cameras?’, ‘will streaming from devices happen soon?’ and questions around how to respond to an ‘increase in demand for students to use Panopto for assignments’. It was fitting to see these types of comments emerge as part of a conference about innovation and we hope to cover some of these points at future events – watch this space!

If you’re interested in innovative uses for video on campus and want to find out more about how Panopto can help, request a demo or try our solution free.