Panopto at the National University of Singapore

The National University of Singapore (NUS) made a bold move nearly two decades ago towards building an integrated system of leading-edge educational technologies that would enrich the learning experiences of its students. 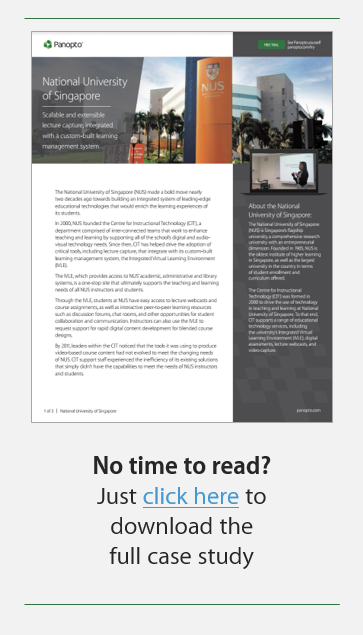 In 2000, NUS founded the Centre for Instructional Technology (CIT), a department comprised of inter-connected teams that work to enhance teaching and learning by supporting all of the school’s digital and audio-visual technology needs. Since then, CIT has helped drive the adoption of critical tools — such as lecture capture —  that integrate with its custom-built learning management system, the Integrated Virtual Learning Environment (IVLE).

The IVLE, which provides access to NUS’ academic, administrative and library systems, is a one-stop site that ultimately supports the teaching and learning needs of all NUS instructors and students.

Through the IVLE, students at NUS have easy access to lecture webcasts and course assignments, as well as interactive peer-to-peer learning resources such as discussion forums, chat rooms, and other opportunities for student collaboration and communication. Instructors can also use the IVLE to request support for rapid digital content development for blended course designs.

By 2011, leaders within the CIT noticed that the tools it was using to produce video-based course content had not evolved to meet the changing needs of NUS. CIT support staff experienced the inefficiency of its existing solutions that simply didn’t have the capabilities to meet the needs of NUS instructors and students.

As an early adopter of lecture capture, NUS found several first generation tools that, together, allowed instructors to capture and share video course content — though eventually NUS experienced frustrations that it would look to solve with a new campus video solution:

Ready to find a next-generation solution for lecture capture that would last at least another decade, NUS began searching for an end-to-end video platform that could grow with the school’s increased adoption of lecture capture and digital course content, and also integrate with the IVLE.

Over more than a decade, lecture capture at NUS had become a technology that neither faculty nor students could live without, and everyone wanted the ability to record and access all lectures online in the future.

In order to achieve this goal, NUS needed a lecture capture system that made it easy for instructors to record lectures on their own both inside the classroom and out, as recording could no longer be limited to a few CIT-managed studios. The new system would also need to integrate with its custom-built LMS, making the uploading and sharing of large amounts of video content simple.

NUS tried several video solutions as they worked to alleviate the growing pains of their old system. During this time, it also became clear that supporting several technologies was taking time away from CIT staff who could be more effective by providing guidance to instructors working to redesign the delivery of their course content.

After testing a number of solutions, NUS eventually found a video capture vendor that they liked and used for two years. The solution offered many of the lecture recording features NUS wanted, including video that simultaneously showed the presenter and their presentation, as well as the ability to schedule recordings in advance. But when the vendor announced it was sun-setting the product, they recommended that NUS check out Panopto.

The NUS CIT team considered the advice of its previous video capture vendor, evaluating both Panopto and another software-based lecture capture system against a long list of requirements that, in addition to scalable video creation and management, and extensible integration with the IVLE, included the following:

In the end, NUS chose Panopto, not only for its cost-effective solution, but also its flexibility to allow customization and automation that integrated seamlessly with the IVLE. Panopto was the right long-term campus video solution that could grow and adapt along with NUS.

NUS deployed Panopto over a one-month break at the end of 2011. After a semester of testing the new system with a few instructors, CIT leaders agreed Panopto was ready to be rolled out to the entire campus. Panopto was deployed to all 70 lecture halls on campus by the second semester of 2012, giving instructors the right tools to record all of their lectures, anywhere.

With Panopto, NUS was able to monitor and manage recordings far more efficiently than it had before. From selecting which video cameras should record in a classroom to scheduling recurring recordings, CIT staff no longer needed to be in the room to capture lecture videos. All video recording operations were now carried out remotely in a centralized control room.

“With Panopto, we have the ability to control video access based on the user group. This lets us also use Panopto to share corporate communications videos, staff training videos, and also live events with the right audiences,” noted the CIT team.

Usage statistics from the student body also spoke to the success of Panopto’s solution. “Recorded lectures have proven to be extremely useful to students studying before exams,” reported the CIT team. “Viewing statistics always hit their highest rates the week before final exams. And everyone’s favorite feature is the optical character recognition (OCR), which allows them to search inside videos to find the exact spot that a topic is being discussed.”

After many years of using Panopto solely as a video content management tool for student-centric content, NUS has more recently expanded access to the platform for other groups on campus such as campus administrators and department heads.