At Southampton we have been capturing chemistry lectures for three years. The early work was not done out of a desire for pedagogic effectiveness but out of necessity. Unfortunately a small group of our undergraduates had a lecture clash with their core chemistry modules. In the past this would have been resolved by sending a postgraduate student to take notes for them and then handing them over. This was however in the age of fees (and with higher fees looming on the horizon) this was deemed unacceptable so various bits of equipment were put together to record the lecture.

The early days without lecture capture

The original system involved screen capture software on a tablet pc. However this was not sufficiently reliable, so a camera was mounted on top of the projector to capture the screen if something went wrong (which it did). The audio from a tie clip radio mic was collected from a bulky receiver, hooked up to a laptop. The primary camera was used to follow the lecturer to provide the ‘talking head’ as well as capture any board work. The overall setup did provide high quality lecture capture and was portable so could be deployed in any lecture theatre. However, it was extremely cumbersome and required a large number of man hours to produce results.

After the initial trial, funding was found to 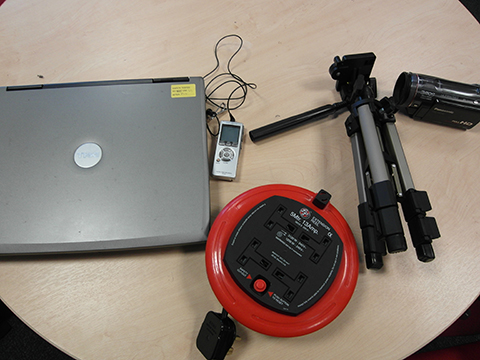 upgrade the equipment. Upgrades to the software as well as experience enabled the spare camera capturing the screen to be made redundant. The cumbersome audio recording equipment was replaced with a pocket size Dictaphone setup with a tie clip mic. The camera was also upgraded at this time. The system was a lot more reliable and portable however it still required a large number of man hours. As well as requiring someone to sit in the lecture theatre to operate the camera all the footage had to be synced together which despite the large amount of practice still took a while. Even on high powered computers the convoluted process to get the videos compressed and into a format suitable for embedding into the VLE took several hours.

It was at this point where a pilot of Panopto was undertaken at Southampton. We ran Panopto alongside the other form of lecture capture. The quality of screen capture was comparable to our current system the quality of ‘talking head’. What really sold it for us was the ease of use. The earliest version was still a little complicated as it had not yet been standardised across the university, however the removal of the need to sync and upload the video represented a massive saving of computing and personal resources. 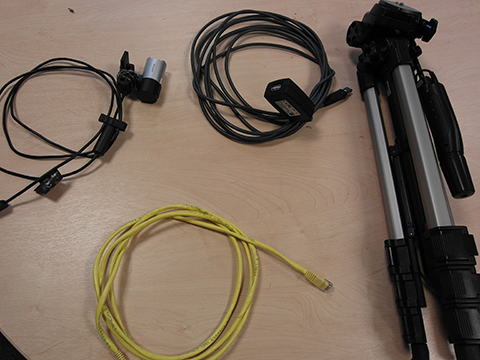 For the first time in three years we managed to have no lecture clashes. This allowed us to make the decision on whether or not to continue with the lecture capture program. The answer from the academics teaching the core modules was a resounding ‘yes’. As the majority of our lecturers were also now using tablet pcs panopto was the obvious choice especially as the University had recently purchased a site licence. With the software installed on all of the lecture theatre pcs as well as our own tablet pcs the only hardware required was the webcam with built in mic and a tripod to mount it on. We mount our camera in a gap in the seats in the first row of the lecture theatre (using a usb extension cable) this allows for a slightly wider angle shot capturing more of the board as well as facilitating for our more mobile lecturers.

The biggest advantage of Panopto is the reduction in man hours. A series of six lectures used to take in excess of twelve hours to shoot and process. Now it takes zero, this is stretching the truth somewhat as a group of undergraduates have been trained to do the basic setting up and tech support but with all the processing taking place on the server the number is defiantly small if not zero. With so much time being freed up we are now undertaking projects which we see as having more direct pedagogic effectiveness involving video. Lecture capture is now so easy we would not consider not using it. If you have a usability story you’d like to share or a question you’d like to ask, please leave a comment. *The views and opinions expressed here represent the author’s and not those of institutions or organizations that they may or may not be related with unless stated explicitly.