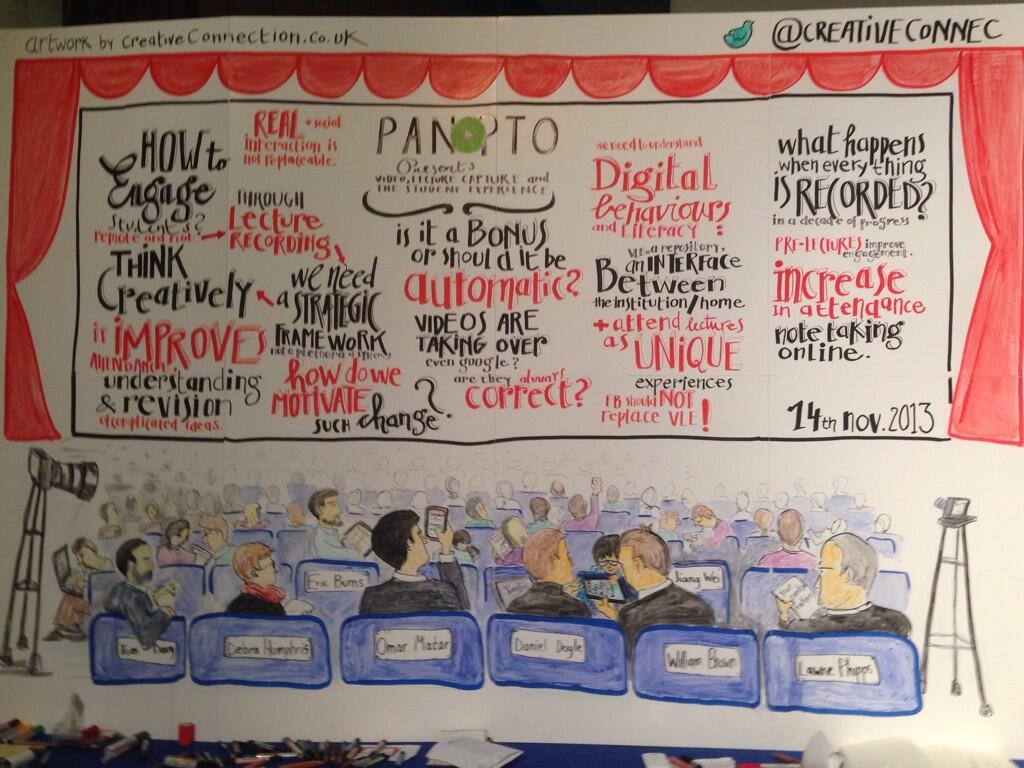 Last week, Panopto hosted a conference on how video technologies and lecture capture are being used to refine – and in some cases redefine – how universities relate to their students. With around 120 registrants from 68 institutions, it seems clear that we’ve hit a nerve and that lecture capture and other video technologies are becoming increasingly significant aspects of the teaching and learning provision at European higher education institutions.

I kicked off the event by discussing some key educational trends to set the scene for the rest of the day. An important point I wanted to raise was that while technology can obviously play a huge role in enhancing the student experience, we can’t lose sight of the fact that students feel that physical lectures are still an integral part of the ‘university experience’. Institutions ignore this at their peril. A theme that recurred throughout the day is that lecture capture is not about replacing face-to-face forms of delivery, but about offering students enhanced ways to review, revise and absorb the materials they have encountered in lectures, seminars and classroom sessions.

This point was reiterated by Professor Omar Matar in his presentation on lecture capture at Imperial College London (who were our hosts for the day). He said that feedback from their students shows that they want to watch back the lecture that they just attended – it matters to them to know that the recording is specific to what they just experienced. He commented that a lecturer will never deliver material in exactly the same way and that students will ask different questions in each version of the lecture. The lecture recording, then, could be seen as an artefact of the unique event – a searchable ‘memory’ of the real-world experience.

In an event focusing on the student experience, it would’ve been very remiss not to give students themselves a voice and to that end, we had the chance to pose questions directly to a student panel who came to discuss their use of recorded lectures, video and technology more generally. What was particularly striking about this session was the variety of ways in which the students were using video as part of their learning process. Daniel Doyle, a student at Newcastle University, mentioned self-directed study groups in which the lecture recording is played back to a group, discussed and then bookmarked – an interesting variation on the idea of social bookmarking that re-injects real world interaction! Jiang Wei from Imperial College London discussed the importance of video in a number-heavy subject like hers, where video can bring previously ‘dead’ numbers to life and help students see patterns and trends more easily. William Brown, also at Imperial College London, talked about his involvement in a live broadcast of a guest lecture which he was able to share with his parents and friends. All of the students were using a range of technologies to interact with their learning materials – from recorded lectures, to Whatsapp and from their VLE to Facebook.

Many of these trends were echoed in a session by Lawrie Phipps from JISC in which he examined students’ digital literacies and what this means for institutions. Bringing to bear the results of discussions with both students and academics he suggested that the integration of various learning technologies is often lacking and that this disjointed approach is definitely felt by the students.

The morning sessions were rounded off by Panopto’s founder and CTO Eric Burns who looked at the results of some of the surveys and research carried out by our clients looking at the impact of lecture capture on both attendance and results. The headline was that the majority of students are not using lecture capture technology to spend a few extra hours in bed, but are still going to the actual lecture and just using the recording for revision purposes! Another key point raised was that at some institutions, introducing lecture capture has been accompanied by a significant rise in student results.

For the afternoon, we branched off into two streams – one focusing on pedagogical issues and one on technical issues. We explored a range of topics, including more on the impact of lecture capture on results and attendance, use cases for Panopto that move beyond lecture capture, mobile video, integrations, different hardware set-ups and an interactive ‘Ask the experts’ session. We are hoping to bring you some guest blog posts picking up on some of these themes in more depth over the coming weeks, so watch this space.

With such a packed programme there was much food for thought, but a key take-home for me was a comment from one of the students. He suggested that while lecture capture might be considered a great bonus at the moment, he felt that we were reaching a tipping point where lecturers not offering this would be considered behind the times. The importance students place on having on-demand access to lecture recordings, then, cannot be underestimated. As more evidence emerges around its impact on student attainment, lecture recording will, as Prof. Matar suggested, increasingly become a normal, mainstream resource. The challenge will then be – how do you use video in new ways to take learning to the next level?