Saint Louis University (SLU) was an early adopter when it came to using video to expand the classroom beyond its physical walls. More than a decade ago, the institution installed what was at the time a revolutionary webcasting solution that allowed faculty to broadcast videos of their classrooms, live online.

This early approach to video-enabled learning proved popular on campus — so popular, in fact, that their original system soon became a victim of its own success. In short order, faculty began asking why the system was limited to live webcasting, and how they could record and share their lectures as well as other classroom content with students on-demand.

For the technology teams at SLU, the feedback was both a sign of success and a clear indication they needed to reassess the needs of the campus. Video-enabled learning had proven to be valuable. The original video system the school had implemented, however, simply wasn’t able to do those extra things. Quickly, SLU began looking for another solution that could pick up where the first had left off, and that would offer even more capabilities for faculty and students.

By 2009, the university had found its next solution for supporting video on campus. They went with a well-known software-based lecture capture system at the time, which quickly became an essential tool for teaching and learning at SLU. Within just a few years’ time, the 13,000 students at SLU would collectively view recorded lectures more than half a million times annually — at a time when both broadband internet connectivity and the modern smartphone were still far less common than they are today.

The new system inspired even more advances in how the university’s faculty and students made use of video as part of the learning experience. Unfortunately, at the same time, SLU’s lecture capture provider also found itself in the midst of significant changes to its business and operations. Soon thereafter, the company all but stopped making updates to their solution. Faculty and students once again became frustrated with a video solution that had become more and more difficult to use and lacked features offered by other video platforms. Usage of their lecture capture system began to decline.

The time was right for SLU to look for its next new video solution — one that would not only be easy enough for everyone to use, but also flexible enough to meet the diverse and ever-evolving needs of the campus.

The Pilot “No One Was Willing To Continue Using”

In seeking a new campus video solution, Kyle Collins, Assistant Vice President for Technology Transformation at SLU, explained, “We centrally manage the technology in all of our 350 classrooms, so we wanted a lecture capture system that could work with the in-room equipment we already had and enable us to automate lecture capture across our entire campus.”

In addition to scaling lecture capture throughout campus, SLU’s new video solution needed to be easy for faculty to use to record and edit their own course videos, which would, in turn, enable them to employ a broader range of pedagogies such as the flipped classroom, rhizomatic learning, experiential learning, and more.

SLU assembled a committee of faculty and students to help guide the school’s decision. After comprehensive research of the leading video solutions on the market and several presentations from potential vendors to both faculty and students, SLU had narrowed the field down to two potential video platforms: Panopto, and a newer low-cost lecture capture solution.

At SLU, it’s standard practice to pilot any new software to ensure that it will adequately meet the needs of constituents on campus. And as the low-cost system claimed to be developing features that faculty had deemed critical, the university opted to pilot the budget option.

Quickly, the decision to pilot would prove wise — by helping the university avoid a mistake.

At the launch of the pilot, faculty and students were excited to try the new video solution. Their enthusiasm, however, quickly waned. The pilot made it clear that the tool was much more difficult to use, and that it was missing many of the key features they had been promised.

“Faculty and students were so displeased with it that no one was willing to continue using it,” said Collins.

It also became clear that the software was not built for a campus-wide deployment to all classrooms. “With our unique technology stack and specific integrations we needed, the vendor simply wasn’t willing to work with us to implement the system the way we wanted to,” Collins explained.

As the pilot semester closed, the SLU team, faculty, and students unanimously agreed that the newer, low-cost video platform was not the right solution for their school.

Armed with more information and an opportunity to re-evaluate their options, SLU decided to reach out to Panopto to begin a new pilot.

Now going into their second pilot, leaders at SLU already knew that the video platform they were seeking needed not only to be easy enough for everyone to use, but flexible enough to support a campus-wide deployment throughout hundreds of classrooms with varying in-room technologies and designs. 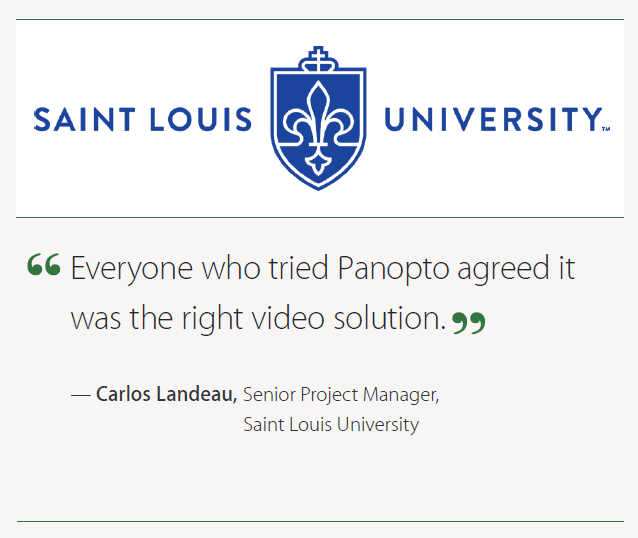 Having piloted the first solution in the fall semester, SLU’s Panopto pilot began during the following spring. Faculty and students were invited once again to give a new video system a try and to provide feedback. Technology leaders would also use the trial period to get a feel for the work required to deploy Panopto across campus and make a full transition away from their long-term lecture capture system as it was prepared to be retired.

This time, the response from faculty and students was completely different. “Everyone who tried Panopto unanimously agreed it was the right video solution,” said Carlos Landeau, Senior Project Manager at SLU, who was responsible for the Panopto implementation.

In the Panopto video platform, SLU found a secure end-to-end video solution with the features they had been looking for, including:

The team at SLU also found Panopto to be an enthusiastic partner, dedicated to helping the university successfully implement the solution at scale and integrate the new video platform into its existing learning systems.

“The customer support we received from Panopto was impressive,” said Landeau. “The Panopto team was always responsive and willing to do anything it took to solve an issue for us.”

A Successful Migration With Excellent Adoption

With the endorsement of the campus following the successful pilot, SLU was ready to make the switch to Panopto. Deploying the new video platform across campus, however, would only be a part of the transition. Before they could give up their existing lecture capture system, the school would first need to migrate its existing collection of course recordings into its new Panopto video library. 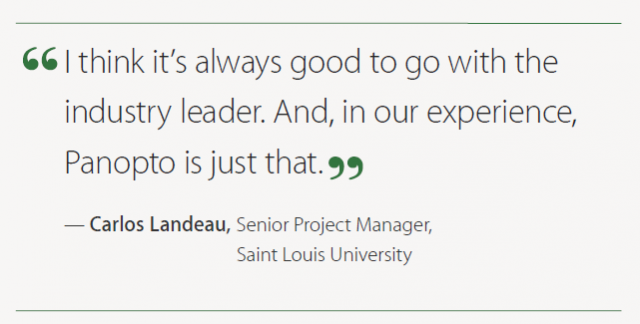 It was no small requirement. SLU had more than 20 terabytes of course videos, and their initial estimates were that full migration would require roughly 5 to 6 months.

Fortunately, Panopto had developed a video migration tool that would do just that. Working together on the challenge, the teams at Panopto and SLU were able to dramatically shorten the time needed to successfully move the school’s video library. “We outlined the challenge, and the Panopto team found ways to shorten the timeline and help us beat our deadline,” said Landeau.

With the video library migration problem solved, the only thing left to do to ensure Panopto would be successfully adopted on campus was to train the faculty on how to use the school’s new video platform.

As part of its decision to purchase Panopto, SLU chose a support plan that included dedicated on-site and virtual training, delivered by the Panopto team. In the run up to the first semester with Panopto on campus, those sessions helped instructors and administrators become comfortable with the new technology. “Panopto’s training has simply been great,” said Landeau. “We had fantastic interest, and attendance at the training sessions was maxed out to capacity almost every time. The feedback from faculty has been very positive.”

Having navigated more than a few challenges in the university’s journey to switch lecture capture solutions, Collins believes that, in the end, Saint Louis University made the exact right choice. “I think it’s always good to go with the industry leader. And, in our experience, Panopto is just that.”

About Saint Louis University
Founded in 1818, Saint Louis University is one of the nation’s oldest and most prestigious Catholic institutions. Rooted in Jesuit values and its pioneering history as the first university west of the Mississippi River, SLU offers nearly 13,000 students a rigorous, transformative education of the whole person. At the core of the University’s diverse community of scholars is SLU’s service-focused mission, which challenges and prepares students to make the world a better, more just place.