The Digital Learning Journey: Going In Expected And Unexpected Directions

This is a guest blog post from Terese Bird, Educational Designer and SCORE Research Fellow at the University of Leicester Medical School. You can follow Terese on Twitter at @tbirdcymru.

In November I presented at the Panopto EMEA Conference on video learning on the topic “The Digital Learning Journey: Going in expected and unexpected directions”. This was to tie in with the conference theme of institutional journeys with video and the idea of getting from ‘A to B’ with learning technologies.

As an Educational Designer, I took this opportunity to consider the linear learning pathways we usually set for our students and the actual learning paths they invariably find for themselves – paths which may be ad hoc, opportunistic, even subversive. I also talked about how we, as educators, can guide, inspire, correct and ‘spark’ as well as the role digital tools can play in this work.

As any teacher knows, these different modes of learning are not separate, but mesh with each other – particularly where formal practices lead to informal emergent effects. The example that I used to illustrate this point was from my own institution.

Our medical students are able to access lecture recordings on demand and I noticed that they had begun to self-organise digital discussion groups around their Panopto lecture recordings using the collaborative notes feature. This wasn’t something any teacher suggested, it simply grew out of the students’ own desire to discuss what they were watching with each other. The formal resource (the recorded lecture) led to a whole raft of informal debate (the collaborative notes). Both, of course, are critical to effective learning.

This emergent, non-formal mode of learning then led me to consider the notion of rhizomatic learning. A rhizome is a plant with no traditional stem, sending out new roots as it grows. The rhizome was taken up as a concept by philosophers Deleuze and Guattari to describe theory or research that is non-hierarchical and which may have a number of ‘exit’ or ‘entry’ points.

When applied to learning, as it has been by Dave Cormier from the University of Prince Edward Island for example, the metaphor of the rhizome highlights the sometimes messy nature of learning; many factors contribute to the learning process – some planned, some not. Often the manner in which the deepest learning takes place is unpredictable.

I then did a quick overview of learning theory to examine how we got to these newer views of the learning process.  I moved from early ideas about behaviourism through to connectivism, which has been described as a ‘learning theory for the digital age’. Connectivism is a disputed learning theory, but one which intersects with the concept of rhizomatic learning in some key ways. For instance, in this model, learning is distributed in a kind of network rather than enacted through a structured hierarchy, similar to rhizomatic modes of learning.

Digital learning maps well to these newer perspectives. I stressed that in a model in which learning is distributed, power shifts away from the teacher and toward the student. The rise of the internet and the ever-multiplying number of tools allowing us to create, share, and communicate easily over its infrastructure has enabled a power shift toward the student. For example, when a student does not understand a concept described by a teacher, she can easily go to YouTube to find any number of descriptive videos demonstrating that concept. Her use of YouTube has given her greater agency. Even the tools themselves have a kind of agency, in that they enable or imply certain uses and practices. It is my view that the better the digital tool, the greater the agency offered to the learner.

What do learners say?

From these theoretical frameworks, I moved on to explore how learners themselves think about their ‘learning journey’. Prior to the conference, I had asked a student to draw her learning process and this is what she produced: 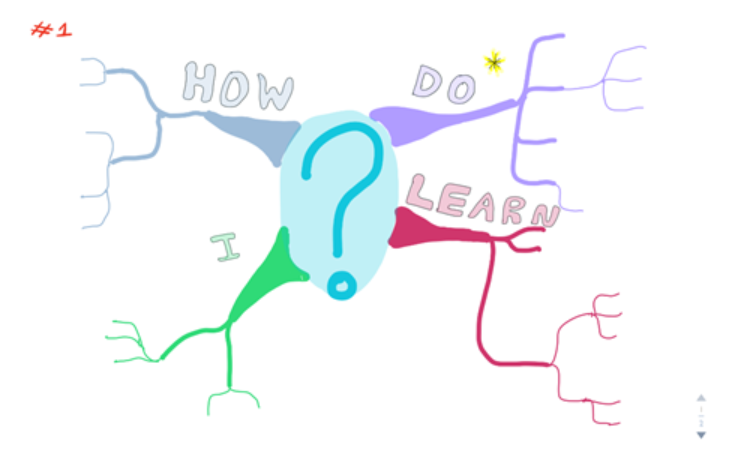 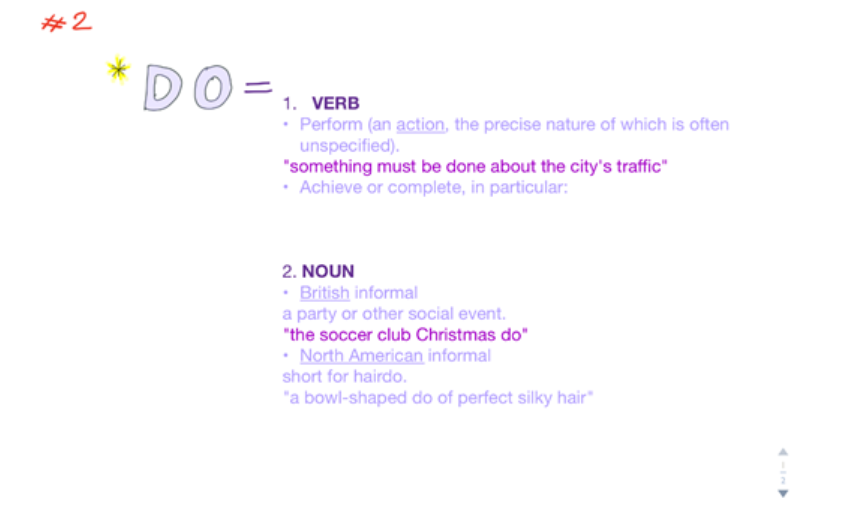 By Vanessa Rodwell. Used with permission.

Without any prompting from me, she had drawn a very ‘rhizomatic’ style of learning journey with offshoots growing out of a central question that sprout off in a range of different directions. She had also asterisked the word ‘do’ in the sentence ‘How do I learn’ and created a follow-up drawing highlighting the active nature of her learning process.

Interestingly, when I asked a teacher to do the same exercise, she produced something a bit more formal and structured. Her drawing shows learning as a winding yet linear journey, and while there always appear to be “things I don’t know”, that cloud keeps getting progressively smaller and the cloud of “things I know” gets progressively larger: 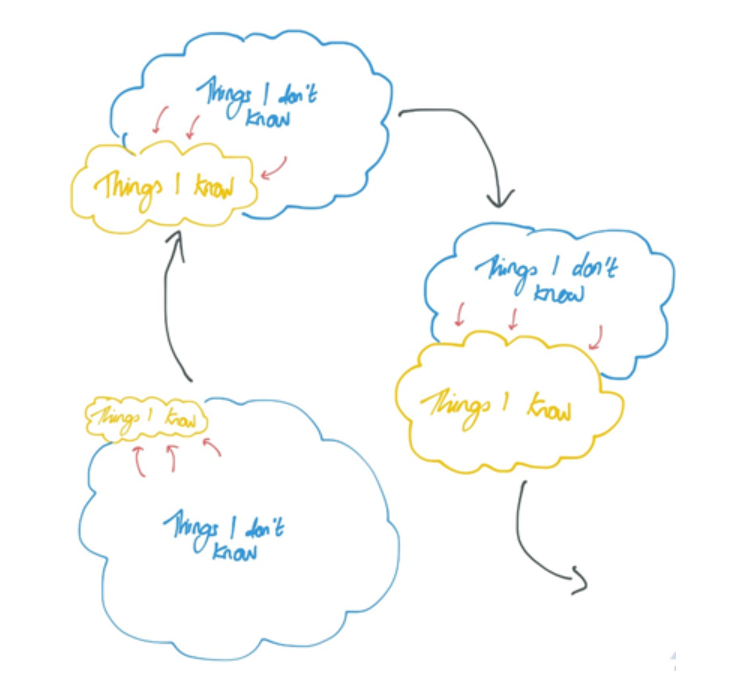 By Hannah Bonfield. Used with permission.

I summed up this part of my talk by highlighting the role digital tools can play in empowering learners and opening up spaces for new growth and new opportunities.

Having covered some more theoretical ideas at the start of the presentation, I then moved on to discuss tangible examples from my institution and others.

Having outlined the sometimes haphazard manner in which learning really takes place (as illustrated by the metaphor of the rhizome) I then wanted to clearly state that this doesn’t mean we should not design and implement structured learning. We still need formal learning structures that underpin more exploratory, collaborative approaches. It is still helpful to plan courses in linear designs, topic by topic, as a foundation from which learners can springboard. As learners progress topic by topic, they may get stuck on and need help with a ‘threshold concept’ (as described by Meyer and Land).

Threshold concepts are core ideas in a given discipline, which, once understood, enable the learner to progress to higher level work and help transform a learner’s view of a topic. For the discipline I work in – medicine – conveying threshold concepts can sometimes be challenging because we are often dealing with things literally hidden from sight within the body. This is where video can be used very effectively to allow learners to see what is unseen. Many of our academics use short video explainers to draw internal bodily processes to help students better visualise what they can’t see – and our students love it.

We also record drawings in the lecture itself, using visualisers to capture an academic illustrating an anatomical concept or showing a particular idea. We’ve noticed that students are now making their own drawings too, right there in the lecture – another aspect of the learning journey that we haven’t designed for but one which has grown organically (or perhaps we could say rhizomatically) out of the teaching process.

As I’ve begun to reflect more and more on the unexpected things that arise along the road I’ve also begun to think about how we could deliberately inject unexpected elements into the formal resources we offer. For instance, if we are discussing a controversial topic in class, would we get a broader range of responses if we added provocative questions into the recording rather than the live session, so that students could respond asynchronously without peer pressure?

‘Needs Must’ or ‘Subversive’ learning

Many of the unexpected practices that we see students adopting arise from a highly pragmatic attitude to their learning. They want to achieve certain outcomes and will often carve out their own path to get there if they think they see a more direct route than the one we’ve formally mapped out for them. This isn’t always a bad thing – sometimes students come up with creative ways to achieve the required result and this is to be encouraged. However, in our role as educators we also have to know when these ‘needs must’ or ‘subversive’ approaches to learning actually lead to poorer quality outcomes that stifle future intellectual and professional growth. Sometimes, following the designated path is absolutely necessary and as much as we should empower learners to co-create their own learning journeys, we have to guide them if they are going down a dead end.

Luckily for us, in my experience, many students are actually highly aware of their own learning process and are open to being challenged and queried on it. I’m always inspired to see students actively taking control of the learning experience and coming up with inventive ways of sharing and absorbing knowledge. One example which I covered in the talk was a student-created website called TeachMeAnatomy.  As most people know from their own personal experiences, one of the best ways to consolidate knowledge is to teach someone else the idea you’ve just learnt. TeachMeAnatomy and other similar projects build on this idea, which has been more formally called ‘cognitive congruence’ – a notion explored by Lockspeier et al.

We’ve been experimenting with this at the University of Leicester, with second-year students delivering lectures to first-year students – recorded using Panopto so they can be watched on-demand. We find that actually sometimes novice learners actually explain difficult concepts in a way that is more accessible than an expert, who may assume levels of understanding that someone encountering an idea for the first time just doesn’t have. And the creative process of coming up with a lecture themselves is useful in and of itself – ‘create’ being at the top of Bloom’s taxonomy of course.

I ended my talk with three key take-home messages:

By doing these three things, learning-focused organisations can position themselves to make the most both of the expected and the unexpected aspects of the digital learning journey.