The Evolution of Lecture Capture Technologies On College Campuses

For most of history, we’ve lived with what can now be considered the “first generation” of lecture capture: students feverishly scribbling notes to make their own recordings of the key points of a given class. Toward the end of the 20th century, technology was brought in to assist. Whether by institutions or the students themselves, tape players, camcorders, digital voice recorders, laptops and more have all been put to the task of recording lectures for individual use.

This first generation left much to be desired. Taking notes forced students to focus on the micro-level of the details being spoken instead of the macro-level of the concepts being taught. And when institutions stepped in, they quickly found that creating and storing recorded lecture files was far too expensive and time-consuming to make available to all students.

Then, seemingly overnight, the culmination of decades of small improvements in all the relevant technologies changed everything.

Digital file storage became less expensive than physical. Digital camcorders achieved parity with analog and soon became inexpensive enough that universities could forego a formal AV team and simply install a camera in the back of high-priority classrooms. And the internet (especially YouTube) demonstrated that video could be shared online.

In higher education, a number of dedicated vendors brought these technologies together — formally establishing the second generation of lecture capture.

In this “modernized” approach to lecture capture, institutions generally invested in internally-developed or vendor-supplied video solutions that, due to their cost and complexity, could only be implemented in the largest lecture halls or dedicated recording studios.

Second-generation lecture capture solutions were typically built around proprietary hardware installed on-premises, with a single camera used for recording. Over the next ten years, software-based products would be introduced to supplement the hardware-based primary tools.

In terms of output, most second generation solutions captured a single stream of video and paired it (either alongside or as picture-in-picture) with the static slides presented during the lecture. Other solutions would capture only the slides and the presenter’s audio.

In a growing number of institutions, lecture capture is transitioning from optional to a standard component of every class, driven largely by student demand. And as video technology itself moves toward commoditization (with cameras that are ever more capable and affordable and storage costs that only fall with time), and a wave of new classroom pedagogies tap video to enable new learning experiences, the second generation of lecture capture solutions is quickly being replaced with a more flexible third generation.

Predominantly software-based and cloud hosted, today’s lecture capture solutions can be deployed campus-wide overnight and come ready to integrate with existing LMS tools. Third generation solutions record from virtually any video or audio device that can be plugged into a laptop, and can capture and play multiple simultaneous video feeds, slides, images, screen recordings, and more.

Today, schools are using these new solutions to outfit every classroom in every department with lecture capture. To optimize the return on this investment, university leaders are opting for video platforms that are flexible enough to accommodate the unique logistical requirements of each learning space and support “infinite customization.”

Lecture capture has even become a factor in infrastructure decisions. As just one example, at University of Central Florida, rapid growth in enrollment over the last few years led to students fighting for seats in overcrowded lecture halls. To address the issue, UCF now relies on the flexibility of its lecture capture system to live stream many of its most popular courses and ensure that students who can’t physically sit in the classroom still get an equivalent, first-rate educational experience.

Looking to the Future

When you visit a classroom today, you see faculty using technology in general, and video specifically, to reclaim class time, facilitate active learning activities, and develop a new style of teaching that adjusts to the needs of individual students. Students can consume course material at their own pace, in any location, and in bite-sized chunks as they hop between devices. 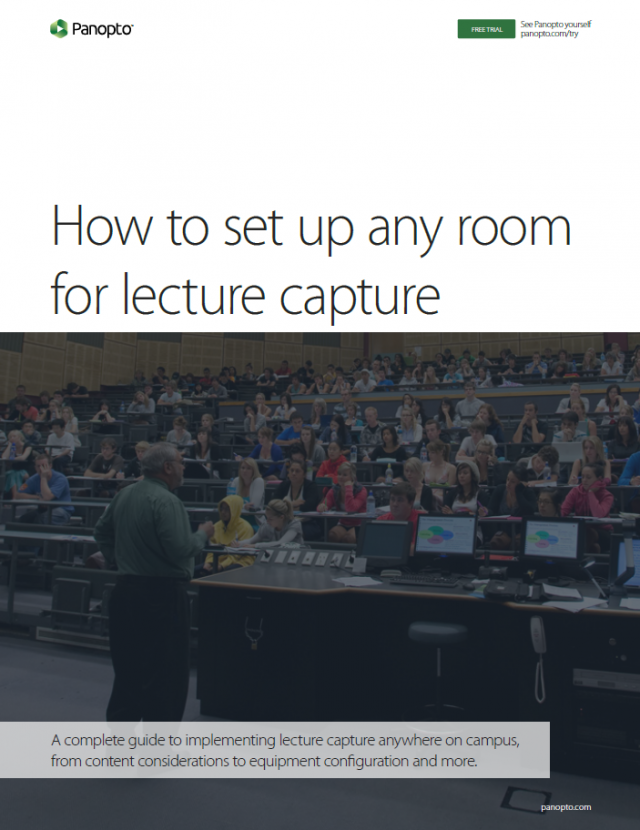 And that makes now an excellent time to consider how your institution currently supports video-enabled instruction, as well as how you might make video even more accessible, flexible, and useful for faculty and students alike.

If your goal is to make lecture capture possible anywhere on your campus, this is your definitive guide. Download it for free here.