No PowerPoint, No Problem: Amazon Doubles Down On Banning Presentations In Meetings

During a recent interview, Amazon CEO Jeff Bezos explained the way he still does meetings, which he admitted may seem “weird” to outsiders. “No PowerPoints are used inside Amazon,” he said. “When we hire a new executive from outside [we warn them]: ‘This is the weirdest meeting culture you ever encounter.'”

Whenever a member of the team at Amazon has an idea to propose, they don’t build out yet another PowerPoint deck, which is standard in most other organizations. Instead, they structure their pitch in the form of a four-to-six-page memo, which the company calls a “narrative.”

It’s a practice that has been in place since 2004 when Bezos originally sent an email to his senior team explaining why he was banning the bullet points. It reads:

“A little more to help with the reason “why.”

Well structured, narrative text is what we’re after rather than just text. If someone builds a list of bullet points in word, that would be just as bad as powerpoint.

The reason writing a 4 page memo is harder than “writing” a 20 page powerpoint is because the narrative structure of a good memo forces better thought and better understanding of what’s more important than what, and how things are related.

Powerpoint-style presentations somehow give permission to gloss over ideas, flatten out any sense of relative importance, and ignore the innerconnectedness of ideas.”

And since it takes so much time to create a great memo, Bezos also implemented a foolproof method to ensure everyone reads it — communal reading.

“We read in the room. [Otherwise,] just like high-school kids, executives will bluff their way through the meeting as if they’ve read the memo,”  he said. In the meeting where the memo is shared, the first 20-30 minutes are spent reading the memo. After that, the presenter fields questions from the rest of the team.

Would This Work Anywhere Other Than Amazon?

While Amazon’s meetings are a bit unique, the underlying structure and goals are not. The format of Amazon’s meetings can be more generally referred to as a flipped meeting. Drawing inspiration from the flipped classroom model in education, in a flipped meeting attendees are provided relevant presentation materials to review prior to the actual scheduled meeting, thereby freeing up in-person time for questions and informed discussion.

However implemented, the flipped meeting is designed to solve some of the common problems that can arise with traditional presentation-based meetings. We’re all familiar with the stereotypical lengthy walkthroughs of underdeveloped ideas and unengaged audiences, structured to leave only a few minutes for questions or conversations.

But the flipped meeting is no quick fix. It’s a cultural change that requires a significant investment of time and resources — costs Bezos has stated time and again he’s more than willing to sacrifice in exchange for more informed and productive team discussions.

Of course, not all traditional presentation-based meetings are lacking substance or unproductive. The Harvard Business Review (HBR) doesn’t endorse an outright ban of presentations in meetings,  but it does agree with Bezos to some extent. The HBR has noted that an over-reliance on presentations during meetings can cause organizations to miss out on more productive conversations that fuel real change within the business.

Making The Flipped Meeting Work For Your Organization

Today, too many meetings are still organized with little more than a thin agenda and a whole lot of wishful thinking. One study estimates that $37 billion is wasted each year in the U.S. on pointless meetings — a number that accelerates as we attend more and more meetings.

We aim to get the right people to attend, then hope that they’ll know offhand whatever information we may need to have a productive discussion. With a little luck, we’ll be able to talk ourselves into a workable consensus. What we often get, however, are partially-attended sessions with partially-informed participants who are able only to piece together a series of next steps and action items to fill in the holes from the initial meeting. Then we schedule a second meeting and repeat.

Does that mean presentations are dead?

While reading a “6-pager” at the start of a meeting and then engaging in active discussion for the duration seems to work well for Amazon, it may not necessarily be the best approach for your organization. Fortunately, the flipped meeting model can be customized to fit your corporate culture.

Well-structured presentations — including those that use PowerPoint — are still a valuable and efficient means of communicating new ideas, typically requiring only a fraction of the time it would take to write a lengthy memo. You don’t need to abandon those presentations, just move them up ahead of the actual meeting.

Prior to the meeting, the presenter can prepare slides and structure her talking points, just as she always would. Then, simply use the built-in webcam on her laptop to record the presentation she would have given during the meeting. The presenter would then share the video presentation a day or so before the meeting so attendees can then view on their own schedules — even rewind and repeat if needed — and come to the in-person meeting fully prepared to contribute to the discussion.

Watch an example of a flipped meeting presentation recorded with Panopto:

While a flipped meeting requires a little more work up front, you’ll reap the rewards during the session. Reviewing presentation materials in advance ensures attendees will have time to earnestly consider the subject. Traditional meetings are structured to minimize disagreement and debate by allowing the presenter to do most of the talking. But real progress can only be made if you structure meetings in a way that brings up points of disagreement as early in the meeting as possible – minimizing time to disagreement and maximizing the time available for the collective to come to a consensus. 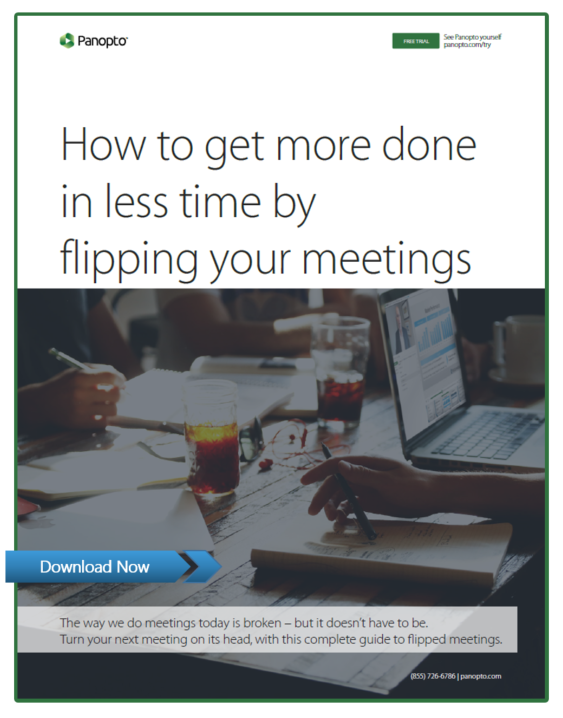 Get The Practical Guide To Flipping Your Meetings

Our Practical Guide To Flipping Your Meetings shows you how to do more during your meetings without sacrificing time or substance. You’ll get a deeper understanding of how to structure and implement a flipped meeting format that works best for your organization, including pre-meeting prep, in-meeting management techniques, and ideas for making it all more efficient with video.