From the very beginning, video has always been wide.

The aspect ratios have changed over time as studios, film producers, television makers, theater owners, and web properties have each had their say. Through the years the resulting recordings have shifted from 4×3 to 16×9 and across dozens of other subtle variations, but the essence has stayed unchanged.

After more than 100 years, however, that standard may be about to break.

The Rise of Vertical Video

While vertical video has long been easy to record — in the age of the handheld camcorder, you could always just hold the camera sideways (although you’d still need to reorient the final recording in post-production) — the format only began to take off as smartphones began adding video capabilities.

But smartphones weren’t like other video devices. Smartphones weren’t built specifically to shoot video — it just so happened they could. So while traditional camcorders pressed the user into shooting horizontal video, a smartphone made no such attempt. They were designed to be held vertically, and that intent held whether the user was making a call, sending a text, or opening the camera.

At the same time they began adding video technology, smartphones were of course on their own exponential adoption curve. And as more people bought one, more people found themselves with a camcorder always at the ready. That meant more people recording more video, often without giving even a moment’s thought to how they were holding their phone.

Of course, not everyone was excited about that.

Early on, vertical videos were ridiculed as the mark of an amateur. App stores overflowed with cheap editors designed to crop vertical videos into horizontal ones. YouTube was famously strident — vertical video couldn’t be uploaded to YouTube, and early versions of the YouTube app wouldn’t even allow a user to record until the phone was turned on its side. 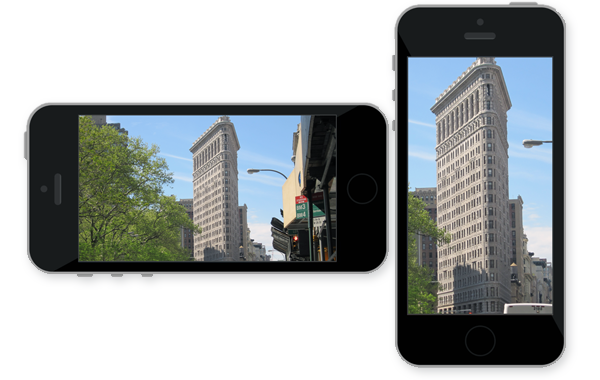 Not everything looks its best in a horizontal frame
The Flat Iron Building, NYC | Source: Flickr

A New Video Format Finds A New Set Of Uses

Whatever the protestations, vertical video has made the leap. According to the New York Times, vertically-oriented video shed its stereotypes and is quickly becoming a common format for a wide variety of new video uses.

Why is that? The reason is different for every video, but there are 3 big factors at play:

First and most importantly, the simple fact is some things just weren’t meant for horizontal.

Any subject that needs to be understood from top to bottom, down to up, or near to far is done a disservice when recorded in a horizontal frame. Vertical can be much more useful for demonstrating product features as they rise and fall, capturing the upward reaction of a classroom science experiment, getting a complete view of geographic or architectural features (like the example above), or focusing on a distant perspective without the extraneous landscape.

Likewise, the human body itself is clearly designed to be recorded vertically — we’re all taller than we are wide, and that aspect ratio holds even when we’re only recording our faces. Recording vertically just makes sense when you want to capture more of the keynote speaker and less of the black curtain behind her. It also makes sense when you’re recording a quick video update to share with your team on Jive or Salesforce Chatter, and just want to record yourself talking and not whatever happens to be in the background.

Most of us didn’t consciously choose to hold our old camcorders to shoot horizontally-oriented video — the cameras were just built for us to hold them that way, so we did.

Today’s mobile devices are, for the most part, designed to be held vertically. Turning them sideways is physically awkward — especially for tablets and other larger devices. That makes shooting vertical video feel more natural by comparison — a feeling that’s only reinforced as popular apps like Snapchat rely on vertical video as the default recording format.

It’s a small question for many of us, but for marketers and media outlets, it’s no trivial concern. As the Times article reports, many professional video producers are turning to vertical formats after seeing user experience tests indicate viewers are simply choosing to watch scaled-down horizontal videos while holding their phones upright, rather than bother to shift the phone for the full-screen view.

As “online video” increasingly means “mobile video,” professional content producers have no choice but to adapt to how users prefer to view.

An example of a vertically-oriented social knowledge sharing video recorded by a sales rep. The vertical format helps the viewer focus on the presenter and her message.

How much could your organization save
by making it easier to record videos?
Calculate Your Savings

The Video Industry Catches On

As the vertical format continues to demonstrate its value and portrait-oriented videos find a place in production environments big and small, the good news for everyone is that today’s video platforms are catching up.

YouTube has recently released a series of updates meant to better accommodate vertical video, both on its full site as well as on its mobile apps. Facebook too — fast-growing to challenge YouTube as the world’s most popular video hosting service — has embraced the vertical format on its own sites and apps.

Of course, for the businesses and universities that use Panopto’s video platform, vertical video has always been an option. Panopto’s web and mobile video viewers are flexible, so no matter what device you’re recording with and what aspect ratio your capturing, you’ll always be able to manage and share it with Panopto.

Looking for a flexible video platform to help your business or school capture, manage, and share video? Try Panopto! Contact our team for a free trial today.