This is the second of 3 posts examining the WIMPi Project at Eastern Michigan University and their experience with classroom technology and blended learning: 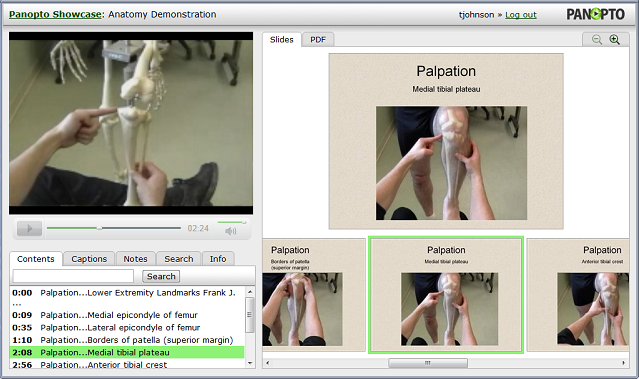 Click the image above to launch the video demonstration

Lecture capture is a fundamental part of the WIMPi classroom (explained in Part 1), but founding WIMPi instructors Frank J. Fedel and Jim Sweet wanted more out of their media capture solution than just in-room recording. After a good deal of exposure to other systems, the WIMPi team selected Panopto based on three basic requirements for media capture: “Panopto is reliable, flexible and easy-to-use,” remarks Fedel. “It simply works.”

They found Panopto’s ease-of-use particularly attractive, because it allowed them to bring on new team members with minimal training. Fedel was also impressed with the stability of the product, having experienced reliability issues with other systems. But in order to achieve the radical reduction in one-way classroom instruction that Fedel and Sweet originally envisioned, they needed the ability to record course material at their convenience, outside of the classroom. “Panopto met our need for recording flexibility,” recalls Fedel. “As a software-based solution, it can be used with just about any hardware configuration—including laptops, tablets and smartphones– which makes it incredibly portable.”

An unforeseen benefit of their decision was the high caliber of Panopto’s support team. Fedel recalls, “I have enjoyed all of my interactions with your technical staff, particularly your Chief Support Engineer, Dave Hannan. I am continually impressed by Panopto’s willingness to integrate customer suggestions into product development.”

Fedel initially implemented Panopto within his own department, Health Promotion and Human Performance, in classes for potential nursing students. The following year he expanded use to include EMU’s Master of Science program in Orthotics and Prosthetics, and instructors from Athletic Training, Exercise Science, History and Biology all began researching Panopto integration for their programs. Currently one program uses Panopto exclusively for online courses while another uses Panopto for every lecture given in the department.

Professor Fedel and his colleagues at EMU are now able to reuse recorded lectures from past semesters as out-of-class viewing assignments for current students. They can also create supplementary material at will, insuring that classes remain flipped and focused on more personalized, interactive activities.

Fedel recalls a significant uptick in viewing hours from the first semester he used Panopto to the second and beyond. “Former students still revisit previous class lectures, presumably to help them review for subsequent classes,” he suggests. “More than a few students have mentioned that that they felt more secure and confident having the lecture recordings available as a resource throughout the semester. Many have asked for the capability in all of their classes.”

Fedel has noted an additional critical marker of success: “I have anecdotally noticed a real difference in the classroom presence of my students after including the lecture capture option,” he confides. “They’re asking more sophisticated, in-depth questions during discussions.”

Next Up: Beyond Lecture Capture