Micro-Flip Your Class to Help Reinvent the Lecture

We often discuss many of the different forms the flipped classroom can take — these approaches range from the standard inverted classroom,where students watch a lecture prior to class and use the lecture time to cover the material in greater depth, to the ‘flipping the teacher’ concept where students create their own responses to the material they’ve watched in advance and ‘lecture’ the lecturer and their fellow classmates during the live class.

As classroom flipping becomes increasingly commonplace, newer flipped methodologies are starting to emerge. One of the more recent concepts to begin cropping up known as “micro-flipping.” So just how does micro-flipping work?

The short answer — in an emerging field of practice, this term (much like the term ‘flipped classroom’ itself!) means different things to different people.

For some, it relates to the idea of creating ‘micro-lectures’ for students to watch before class, rather than replicating the kind of standard ‘long-form’ lecture presentations that often get recorded as part of an institution’s lecture capture programme. An increasing body of research shows that video viewers tend to favour shorter recorded content, which they find easier to absorb. For instance, at Ball State University, student surveys on flipped classroom content suggested that the majority of those taking the class preferred pre-lecture recordings that were 6 minutes long or less.

For others, micro-flipping relates more to the way in which material is delivered in the live session itself. Critics of the flipped approach often point to the fact that if students don’t do the required work in advance, this renders the live session useless to them. However, the ‘in-class micro-flip’ can incorporate aspects of the pre-recorded material into the live session, using it as a springboard for discussion and debate – essentially letting the idea of student-centred learning come to the fore but bringing in more traditional ‘lecture style’ content during the live session when students appear to be struggling or where it becomes clear a significant number of the students aren’t fully prepared.

Does Your Lecture Need A “Lecture Trailer”?

For anyone interested in the idea of ‘micro-flipping’ (in whatever form that takes), a related spin on the idea emerged this week in a Times Higher Education article from UK-based academic Nicholas Morton, who talked about the idea of creating a ‘lecture trailer’ to help inspire students.

Morton’s article evokes the picture, familiar to almost every academic, of the lecture theatre at 9am filled with hundreds of students in greater or (usually) lesser stages of engagement. The challenge for any instructor in this type of situation is – how do you best motivate these students?

Having outlined a few tactics to create an impact right from the moment students set foot in class, Morton goes on to discuss the role of video in creating a sense of excitement around the material to be covered. He is experimenting with the idea of one-minute-long ‘lecture trailers’ which are designed to outline the key themes being covered in each lecture and pose challenging questions for those attending. In the article, he describes it as an ‘element of flipped learning’.

Micro-Flipping and the Lecture Trailer

It is interesting to consider how this idea intersects with the concept of the ‘micro-flip’. Whereas the idea of the ‘micro-lecture’ suggests that the role of the video is still primarily to instruct, when the video in question is designed more to pique interest, the role of the recording changes. It exists not just to set the scene or cover core material, but to light a spark of inspiration that will carry over into the live session.

Of course, there are other academics who share the notion that aspects of flipped learning, far from being antagonistic to the traditional lecture, can actually play a crucial part in revitalising the role of the lecture as part of the learning process. Dr Jeremy Pritchard from the University of Birmingham talked about this in a case study on his use of Panopto for flipping: 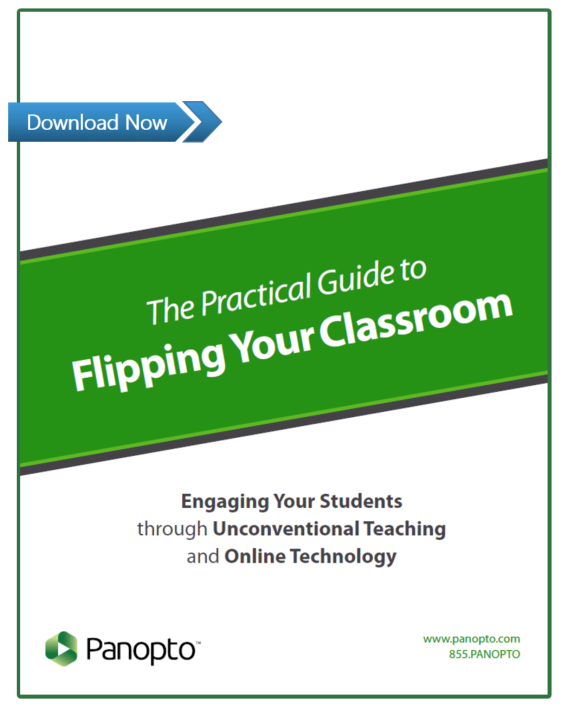 “By flipping the classroom, you are not necessarily throwing the traditional face-to-face lecture out completely – in fact, it gives academics the chance to reinvent the lecture as an inspirational tool. That question of engagement is key here. Some material just doesn’t lend itself to the ‘performance’ of a lecture and so if you can find another way to deliver that content, it’s better for both academics and students.”

While these academics have different takes on the way the flipped video is used, both see the potential for flipped learning to foster a more engaged student population – whether that is by using the video content to deliver more factual, didactic instruction so that the lecture can be used to deliver the inspirational elements, or by using the video trailer itself to build an almost viral sense of buzz around the lecture content in advance.

If you’re interested in micro-flipping or other flipped classroom approaches, be sure to download our new ebook, A Practical Guide to Flipping Your Classroom.