“I wanna say a special welcome to everyone that’s, uh, climbed into the Internet tonight and, uh, has got into the M-bone. And I hope it doesn’t all collapse.”

With these words, Mick Jagger stepped into the pages of internet history. The year was 1994. There was no YouTube, no FaceTime, no Periscope, and no Meerkat. There was, however, the multicast backbone (“Mbone”), an experimental virtual network for carrying IP multicast traffic on the Internet. Using the Mbone, the Rolling Stones became the first major band to live stream a concert performance online.

From Multicast to Modern Streaming

Since then, the world of video streaming has seen a lot of change. In the 1990s, as the industry wrestled with technical challenges of multicast video traffic, HTTP download and stateful streaming protocols began to take center stage. In 1996, Netscape, RealNetworks, Borland, NeXT, and 36 other companies threw their weight behind the Real Time Streaming Protocol (RTSP). In 2002, Macromedia released Flash Communication Server MX 1.0 with support for what would become the most widely-adopted protocol for connection-oriented streaming, the Real Time Messaging Protocol (RTMP). And in 2005, YouTube launched, reminding internet users that, at least for short-form video, HTTP progressive download was still a very viable option.

Then in 2008, Microsoft introduced Smooth Streaming, a hybrid approach to video delivery that offered many benefits of custom streaming protocols while leveraging HTTP and existing network infrastructure. In August of that same year, Microsoft and NBC used Smooth Streaming to live broadcast every minute of every event of the Beijing Summer Olympic Games to over 50 million viewers around the world. In a single event, “Modern Streaming” had proven that the internet was capable of scalable, reliable, broadcast-quality video.

In the years that followed, Modern Streaming quickly gained momentum, with Apple introducing HTTP Live Streaming (HLS), Adobe releasing HTTP Dynamic Streaming (HDS), and major media and streaming companies collaborating on MPEG-DASH. The innovations in Smooth Streaming, HLS, HDS, and DASH have driven a resurgence in HTTP-based video delivery, and today are reshaping how businesses and universities stream media content across their networks.

Download the Infographic
But what makes a video streaming protocol modern? And how do the capabilities of modern protocols differ from those of stateful protocols like RTMP? To answer these and other questions, check out the Modern Streaming infographic. Just click the image in this post, or for a higher-resolution version of the infographic, click here. 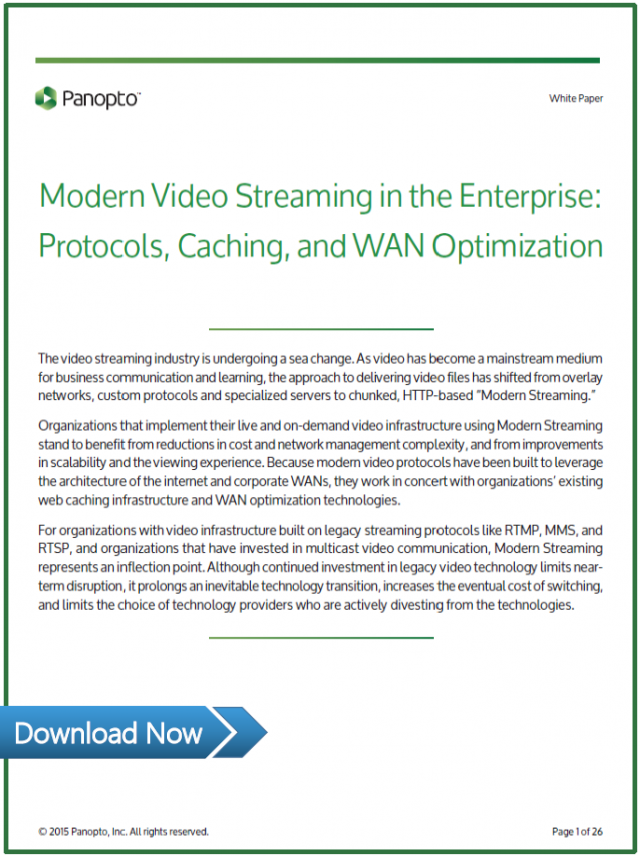