This Week In Ideas Shared With Panopto — February 6, 2015

It’s only been a month, and already 2015 is shaping up to be the year video makes the leap out from the AV room — and becomes just another normal part of how we all communicate and share ideas.

Of course, Gartner Research has been predicting this since the turn of the decade. By next year, the group forecasts, every single employee in large organizations will consume 45 minutes of work-related video every day.

Likewise, Aragon Research opened 2015 with a prediction of their own — that by this December, “non-specialist staff will do more than 50 percent of enterprise video creation and editing, using a new generation of easy-to-use authoring and editing tools. The demand for video is unstoppable, as users of all ages realize that it is the fastest, most effective way to share knowledge and information. The challenge has been making it faster and easier to create compelling video content. New tools and higher skills are helping to meet that challenge.”

What’s made everyone so sure this will be the year video becomes more than a specialist’s tool in the workplace? Well for starters, because that’s what it’s already become at home.

Every minute of every day, more than 100 hours of video are uploaded to YouTube. In those same 60 seconds, 8,000 videos will be created and shared on Vine. Social sites like Instagram and Snapchat have added video to their already established toolsets. And just last week, even Twitter (the site created on the premise that 140 characters of text is all any idea needs) added native support for video.

Half a millennium after the dawn of the printing press, 90% of human communication is still nonverbal. Video offers a medium that enables us to share ideas to the full range of our communication skills. And as more and more of us see the potential in the video cameras already built into our smartphones and laptops — and as video platforms like Panopto make it simple to record, share, and search video files the same way we would documents or emails — it’s only natural that people would select the tool that best for the job.

This week we saw more and more people taking advantage of the power of video to share ideas, send messages, and make a statement. And in the spirit of passing it on, these are just a few of the ideas shared this week with Panopto. 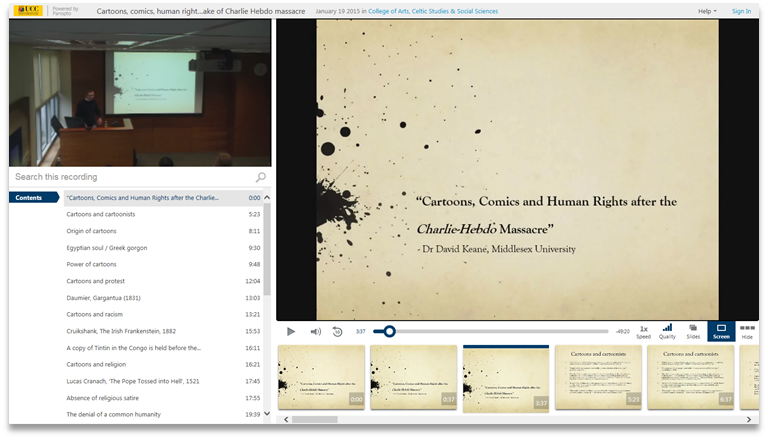 Cartoons, Comics, and Human Rights After the Charlie Hebdo Massacre
The recent attacks in Paris on Charlie-Hebdo have reignited discussions around the meaning of cartoons and freedom of expression. In this recorded lecture, Dr David Keane, Senior Lecturer in Law at Middlesex University, looks at the history of cartoon satire, invoking past examples of racial and religious discrimination in cartoons while emphasizing the important role cartoonists have played in criticizing and checking the exercise of power. Dr Keane also examines the legal meaning of freedom of expression, which despite popular belief to the contrary has never been held absolute. 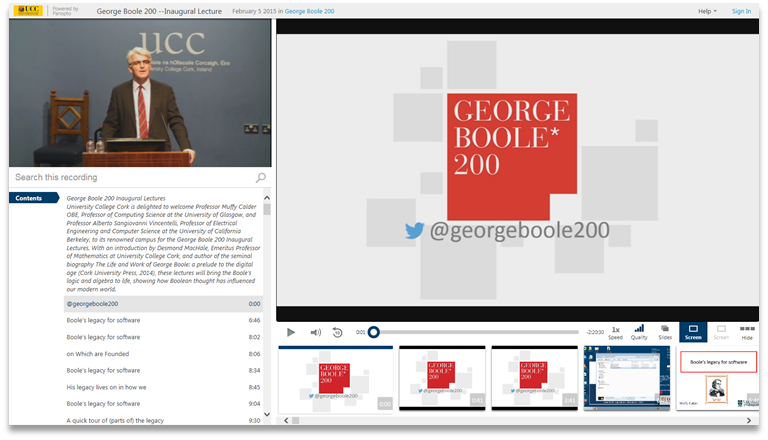 George Boole 200 — Inaugural Lecture
Join University College Cork as it welcomes Professor Muffy Calder, Professor of Computing Science at the University of Glasgow, and Professor Alberto Sangiovanni Vincentelli, Professor of Electrical Engineering and Computer Science at the University of California Berkeley, to its campus for the George Boole 200 Inaugural Lectures. With an introduction by Desmond MacHale, Emeritus Professor of Mathematics at University College Cork, and author of the seminal biography The Life and Work of George Boole: a prelude to the digital age (Cork University Press, 2014), these keynote events bring Boole’s logic and algebra to life, showing how Boolean thought has influenced our modern world. 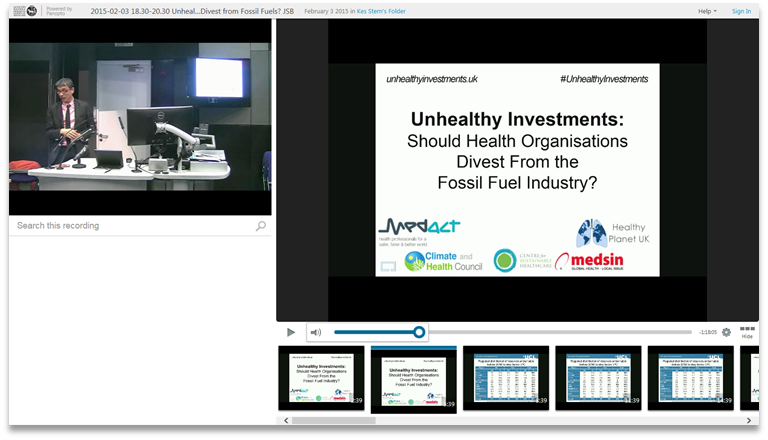 Unhealthy Investments: Should Health Organizations Divest From the Fossil Fuel Industry?
Join the audience at the London School of Hygiene and Tropical Medicine for this recorded live event, taking place to mark the public release of a report about the case for divestment from fossil fuels by the UK health community. An expert panel examines this complex issue from several perspectives, including public health, climate science, healthcare sustainability, finance and socially responsible investment, providing viewers with a more clear insight into the arguments both for and against health organisations continuing to invest in fossil fuel companies. 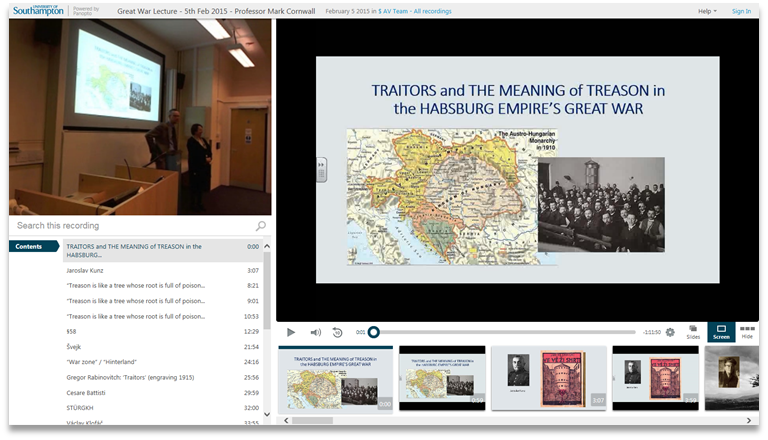 Traitors and the Meaning of Treason in the Habsburg Empire’s Great War
Treason is a ubiquitous historical concept, currently very topical yet very under-researched. In this presentation, a part of Southampton University’s ‘Unknown War’ series, Professor Mark Cornwall, Professor of Modern European History explores the “landscape of treason” in the Habsburg Empire during the First World War. It places it in a broader historical context, theoretically and legally, then explores why the blunt weapon of treason was wielded so severely by the Austro-Hungarian authorities. What can we learn – the meaning of treason – from the notorious large-scale trials that were staged of Czech and Serb traitors? By 1918 most of these traitors had been amnestied, and chaos increased as they turned the accusation of treason upon the Habsburg Empire itself. 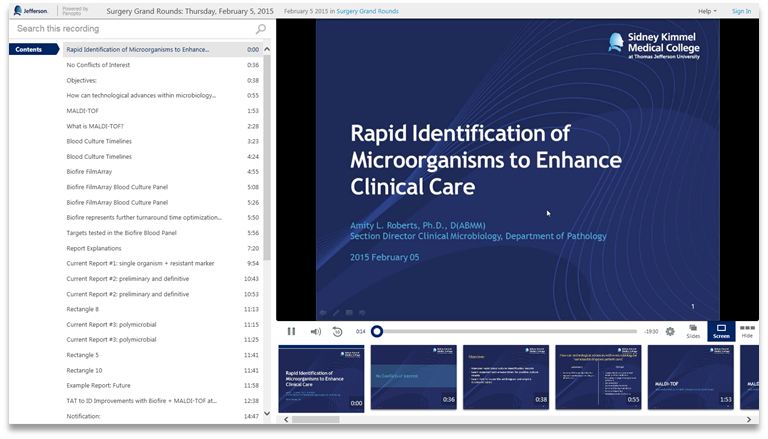 Rapid Identification of Microorganisms to Enhance Clinical Care
Learn with the medical students at Thomas Jefferson University, as Dr Amity Roberts delivers this Grand Rounds presentation on how physicians can improve care standards via more rapid identification of microorganisms. Find out more about how medical professionals are learning to interpret rapid blood culture identification reports, and get to know the latest expectations for turnaround times for positive culture results with identification or antimicrobial susceptibility.

Try It For Yourself!
Panopto makes it easy for anyone, anywhere to record presentations and share them online, both as live streaming webcasts and recorded on-demand video. To see how Panopto can help you share your ideas, contact our team for a free trial today.