Over the summer of 1858 in Illinois, two men reshaped the very notion of how a person could support an idea they believed in.

Today most of us remember learning about the series debates between US Senate candidates Abraham Lincoln and Stephen Douglas, and being taught how those contests created the model for the modern debate (now dubbed the “Lincoln-Douglas Style”), and are responsible for the style (if no longer the exact format) of presidential debates to this very day.

However, these debates didn’t merely set the tone for 150 years and counting of national politics. Their impact on the way we communicate — even today — was bigger than that.

What many of us don’t remember is that until 1913, US Senators weren’t elected by popular vote. They were instead selected by the majority party elected to their state governments. Candidates like Lincoln and Douglass, then, weren’t using the debate to promote themselves — they were using it to promote a cause. Whoever was better able to present his case gave his cause the inside track to the election, only after which would he be able to put his ideas into action.

And as evidenced by the mark their events left on history, it’s safe to say they established a style that works. In fact, the legacy of the Lincoln-Douglass debates lives with us today in two parts.

First, in establishing the persuasive power of the presentation. The Lincoln-Douglas debates so captured the imagination of their audiences that they spawned national coverage. The results of the events directly impacted both the immediate and long-term membership and policies of the US government. That success continues to be emulated in the style of our presentations today, from political addresses to corporate keynote speeches and academic conferences.

Second, and often overlooked, is an equally powerful lesson. The impact of the Lincoln-Douglas debates on US history isn’t due only to the impression they made on those in attendance. After all, the 7 debates crisscrossed rural Illinois — for many of the events, the live audience would have easily fit in a modest high school auditorium.

Rather, it was the distribution of the debate recordings that gave the events their reach. Transcripts of each proceeding were shared with the press and other publishers akin to modern day blogs, bolstering attention while the series was still ongoing. And after his lost Senate bid, Lincoln himself compiled the complete set of transcripts into a book released the next year — creating an on-demand version of the event now widely credited with boosting Lincoln’s national presence and helping him win the White House the following year.

In taking the stage and presenting their causes, Lincoln and Douglas won support for their views. In making that case more broadly available, Lincoln helped new audiences discover his message, and ultimately, helped himself win the opportunity to put his ideas into action.

Today those with a message to share continue to act on both lessons of the Lincoln-Douglas debates. But while national political movements and well-known corporate executives have long had the ability to broadcast their ideas and make their event recordings available on demand, that same tool hasn’t been open to most of us.

Today however, video technology has become more pervasive than anyone dreamed even a decade ago. It’s now possible to capture professional, high-definition video with the smartphones in our pockets, and to make that video shareable instantly with flexible video platforms like Panopto.

That means it’s now possible for just about anyone to present their case — and, take a page from the Lincoln-Douglas debates, by ensuring it’s shared with an audience as large as they like. Campus events, corporate town halls, even project kickoff meetings or team scrum sessions can easily be recorded and shared — helping everyone more easily share their ideas and build the support they need to earn the opportunity to put them into action.

This week we saw more and more people taking advantage of the power of video to share ideas, send messages, and make a statement. And in the spirit of passing it on, these are just a few of the ideas shared this week with Panopto’s video recording software. 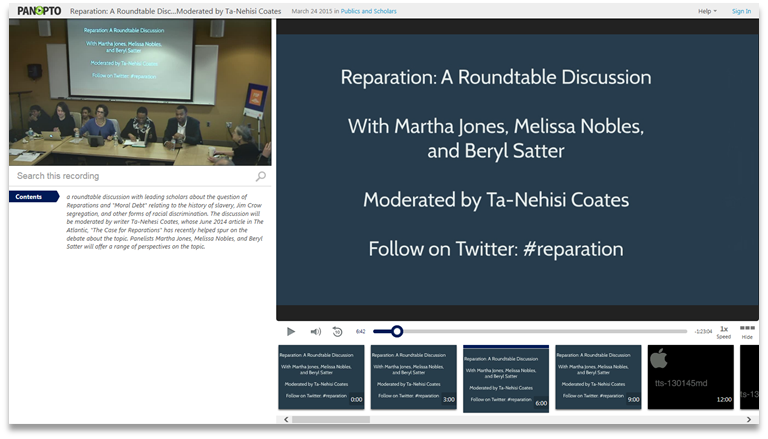 Join Duke University for this roundtable discussion with leading scholars about the question of Reparations and “Moral Debt” relating to the history of slavery, Jim Crow segregation, and other forms of racial discrimination. The discussion will be moderated by writer Ta-Nehesi Coates, whose June 2014 article in The Atlantic, “The Case for Reparations” has recently helped spur on the debate about the topic. Panelists Martha Jones, Melissa Nobles, and Beryl Satter will offer a range of perspectives on the topic. 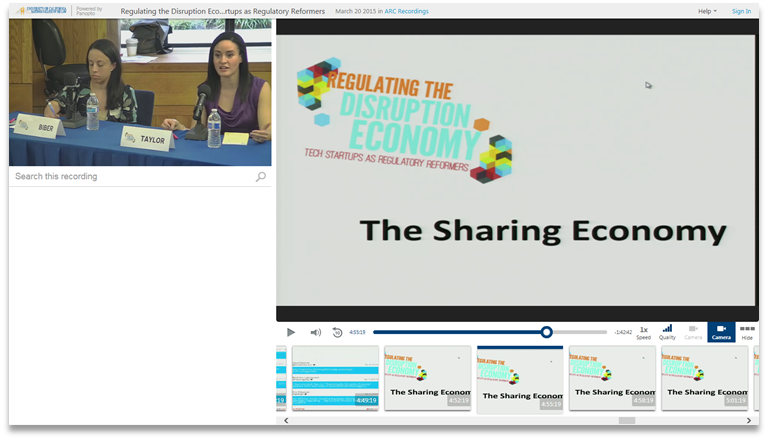 Sit in with the UC Hastings Science & Technology Law and Business Law Journals for this symposium focused on the interaction between startup companies and regulators. Examples include the evolving regulatory status of virtual currencies and sharing economy companies and features notable panelists from Airbnb, Bitcoin, and Lyft. 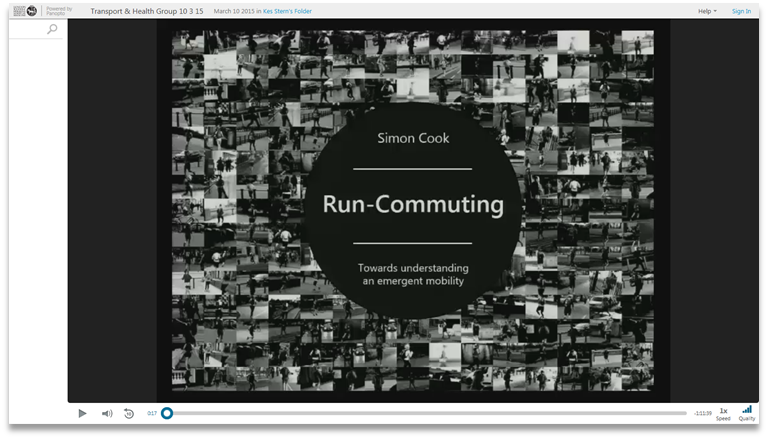 Run-Commuting: Towards Understanding an Emergent Mobility

We all know about the cycling boom and the importance of active travel for health and environmental benefits. Yet running as a mode of transport has always been ignored – until now. Running as a form of functional travel is a relatively new concept especially in terms of existing data to quantify the levels of participation. Running as a form of transport is very much contested in terms of policy; overcoming these barriers can be achieved in a similar way to that of cycling. In this flipped classroom presentation, listen in as Simon Cook explores the idea of run-commuting in more depth. 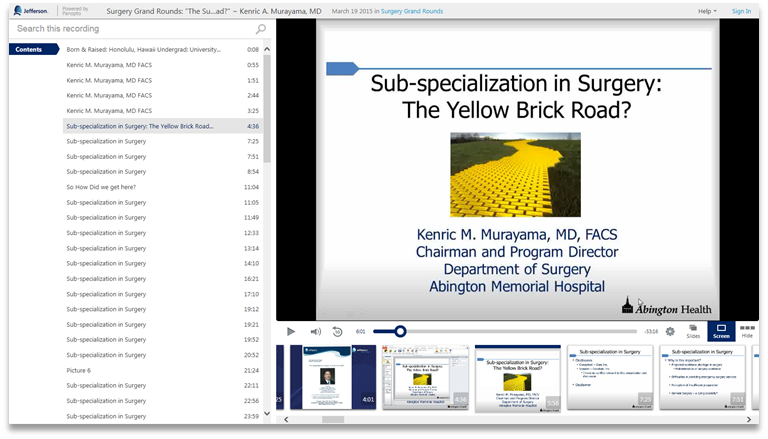 Dr Kenric M. Murayama, MD, FACS, of Abington Memorial Hospital joins the Thomas Jefferson University Grand Rounds program to share with the class the history and future of sub-specialization in surgical practices. Dr Murayama delves into the driving forces behind the trend toward sub-specialization, and then discusses the workforce implications in surgery due to sub-specialization and what early tracking may mean for the next generation of medical practitioners. 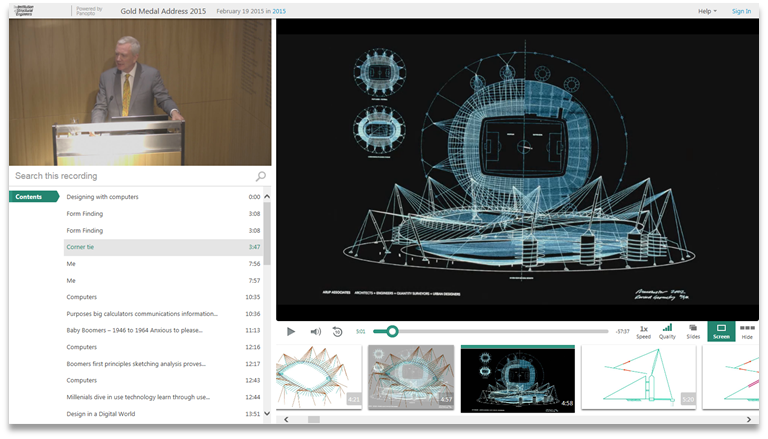 Tristram Carfrae, winner of The Institution of Structural Engineers 2014 Gold Medal shares with the organization his impassioned defense of structural designing with computers. In an era when it is still relatively common to hear senior members of the profession exhort more junior members to “stop using computer models”, particularly early in the design process, Carfrae contends that a computer analysis programme is really just a superior calculator, and raises the question of just what is it about making a quick sketch and a hand calculation that makes it any more valuable than a computer model, which is replete with stresses, deflected shapes, loads, reactions and many other informative results. 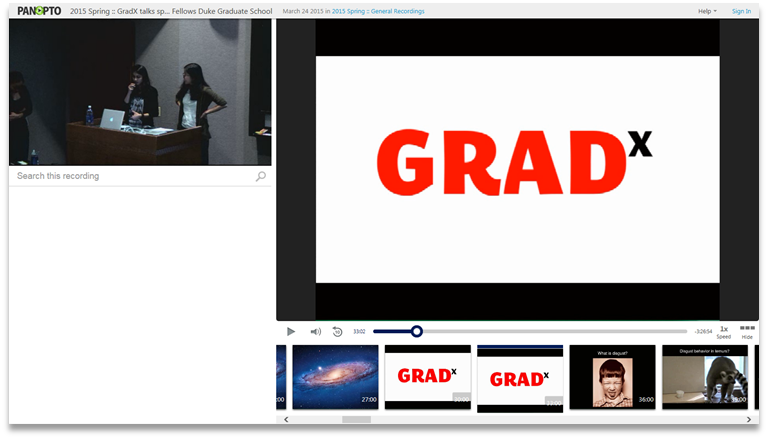 The Graduate School and the Society of Duke Fellows invite you to experience the third annual Duke GradX talks, an event showcasing graduate research. Rather than showcasing finished projects, presenters share a defining question that they are driven to investigate or explore further, and to communicate their ideas in a clear, visually appealing way that is understandable to a broad audience in the short time frame of 5-6 minutes. Topics include “What is Disgust,” “How is Chewing Coordinated,” and “How Do We Define Informed Consent?” Leading the event is Dan Ariely, the James B. Duke Professor of Psychology and Behavioral Economics at the Fuqua School of Business, whose studies investigate how people actually act in the marketplace, as opposed to how they should or would if they were rational beings.