This week in history, 78 years ago, we remember the enduring legacy of the bombing of Guernica during the Spanish Civil War, one of the first raids on a defenseless civilian population, and a stark reminder of the deadly potential of unrestrained force. 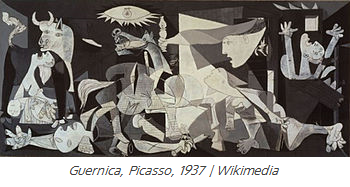 Outrage sparked around the globe in the wake of the attack, and the world protested with demonstrations and editorials almost countless in number. One condemnation, however, has carried that message louder and further than any other — and has done so without a single word.

Pablo Picasso’s Guernica is today perhaps the world’s most well known protest statement. Painted in the wake of the attack and premiered the following June, the piece is often lauded for its striking visuals and visceral emotion, and has become “a universal and powerful symbol warning humanity against the suffering and devastation of war.”

What made Picasso’s work stand apart from the so many other protest pieces is the work’s almost overwhelming visual nature. Not only is the painting graphically striking, it’s irresistibly large — at 11 feet tall and 25 feet wide, a viewer can’t help but be swallowed up into the canvas.

Alongside a field of statements and speeches, Picasso’s Guernica reminds us that human beings remain visual creatures, and that a resonant image can transcend language to stir more emotion across more time than possible even with the most articulate editorial. It’s a lesson that now most messages have learned well, as today’s causes put ever more effort into not simply stating their case, but showing it wherever possible.

Of course, few are blessed with the artistic talents of Picasso, but that’s no longer any limitation to bringing a message to visual life. Today a variety of tools, from PowerPoint and infographics to the cameras on our mobile devices, are making it possible to create graphics, pictures, and even video to help bring our causes to life.

This week we saw more and more people taking advantage of the power of video to share ideas, send messages, and make a statement. And in the spirit of passing it on, these are just a few of the ideas shared this week with Panopto’s video presentation software. 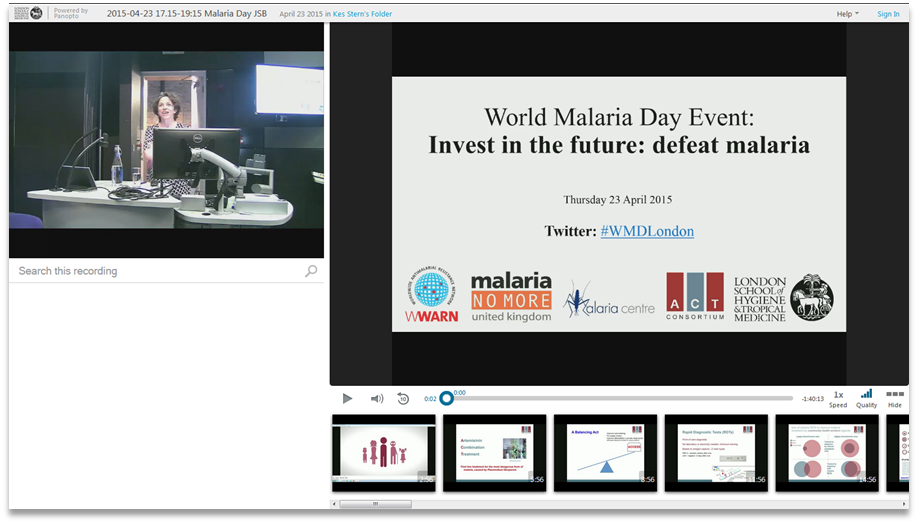 World Malaria Day: Invest in the Future — Defeat Malaria
Malaria is a preventable and treatable mosquito-borne illness. Between 2000 and 2013, an expansion of interventions has helped to reduce malaria mortality rates worldwide by 47%, and by 54% in the WHO African Region, where most malaria deaths occur. Join the London School of Hygiene & Tropical Medicine to mark World Malaria Day, and sit in on this expert panel discussion on important aspects of malaria control, including rapid diagnostic tests, antimalarial medicines, the imperfect nature of malaria vaccines, and the importance of global resource mobilization. 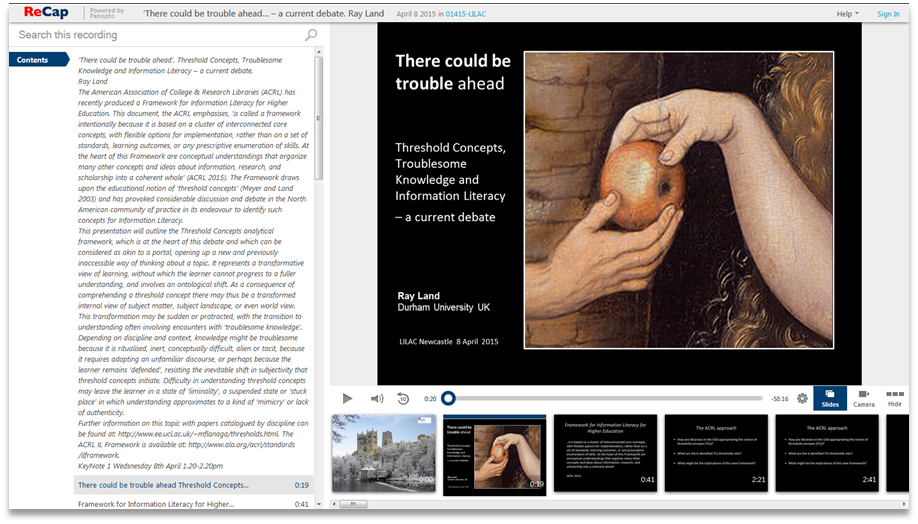 There Could Be Trouble Ahead: Threshold Concepts, Troublesome Knowledge, and Information Literacy
The American Association of College & Research Libraries (ACRL) has recently produced a Framework for Information Literacy for Higher Education. At the heart of this Framework are conceptual understandings that organize many other concepts and ideas about information, research, and scholarship into a coherent whole’ (ACRL 2015). The Framework draws upon the educational notion of ‘threshold concepts’ (Meyer and Land 2003) and has provoked considerable discussion and debate in the North American community of practice in its endeavour to identify such concepts for Information Literacy. Join Ray Land of Durham University for this presentation outlining the Threshold Concepts analytical framework, which is at the heart of this debate and which can be considered as akin to a portal, opening up a new and previously inaccessible way of thinking about a topic. 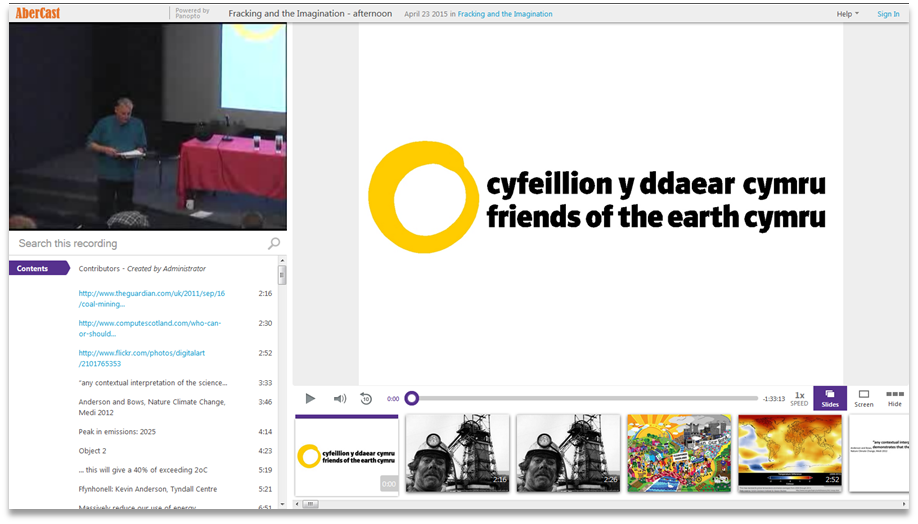 Fracking and the Imagination: Scraping the Barrel or Saving the Day?
In the light of Ceredigion becoming the first frack-free local authority in Wales, join Aberystwyth University to ask a fundamental question: what does that mean? What is the science and technology of fracking? Where is energy policy made and contested? And how do we imagine fracking: how do we experience it emotionally and so represent the process and its effects? Extreme energy technologies such as fracking could shape the physical, human and cultural geography of the future. This forum brings together scientists, activists and artists to participate in a public depiction of fracking. 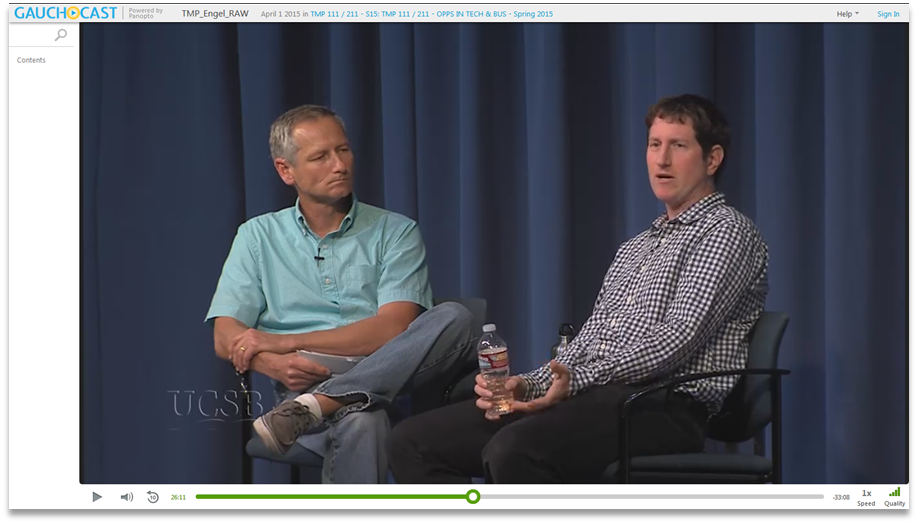 UC Santa Barbara Distinguished Speaker Series: Dan Engel
UCSB Technology Management’s Distinguished Speaker Series is one of the program’s premier events. This quarterly series features leaders from academia or industry who have distinguished themselves as experts in their fields. Drawing from prominent academic researchers, experienced business professionals, and successful entrepreneurs this series gives UC Santa Barbara’s students as well as the community the rare opportunity to learn directly from those who have excelled through innovation and dedication to their work. In this edition, join the students to hear from Dan Engel, a serial entrepreneur, CEO & Co-Founder of FastSpring, and a leading executive behind Google AdSense, Google AdWords, Picasa, and GoToMeeting. 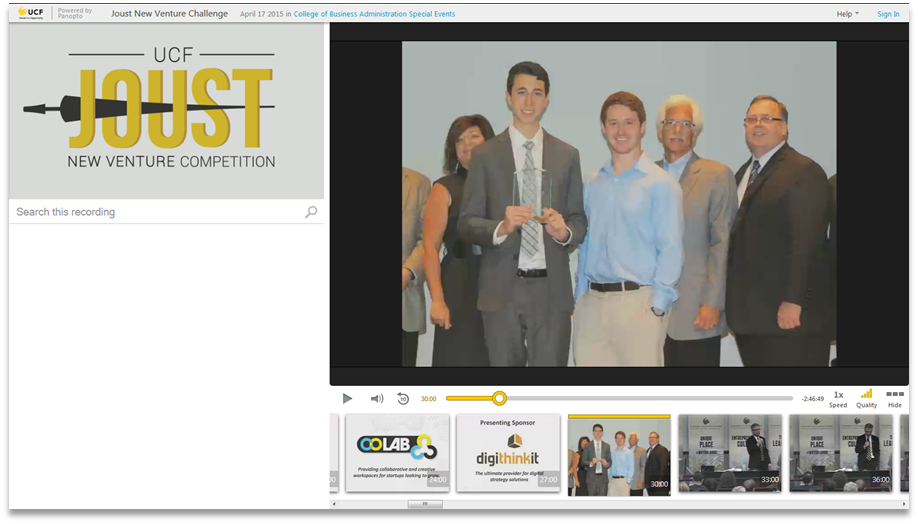 The UCF Joust New Venture Competition
The University of Central Florida’s Joust New Venture Competition (NVC) celebrates the entrepreneurial efforts of student starters across the university’s campus by showcasing their startup proposals, introducing them to community leaders, and providing resources necessary to launch their ventures. The Joust competition also fosters UCF’s vibrant starter community by promoting an entrepreneurial culture across our campus. Joust contestants are highly engaged entrepreneurial student leaders whose efforts illustrate their ability to solve problems and create value. The Joust serves as a springboard for many student starters to launch their ventures and attract investors. This event brings together big ideas, big prizes, and prominent leaders to create one of UCF’s most exciting student events — a must-watch for anyone interested in seeing the next new wave of ideas that will drive tomorrow’s businesses.