Teaching the performing arts is often quite different from teaching other subjects. From the intricacies of individual movements and expressions to the complexities of adapting and coordinating with others in the moment, there is so much that simply can’t be taught through a traditional lecture.

For instructors of the performing arts, visual materials are an essential part of helping students learn their craft. Prior to a performance, the right visuals can help students to recognize the nuances that separate an average performance from an exceptional one. And following a production, the right visuals from the production can help students and instructors to assess their performance and find opportunities for continued improvement.

Recently, leaders at The Hong Kong Academy for the Performing Arts (HKAPA), a renowned institution that provides an interdisciplinary education in Chinese Opera, Dance, Drama, Film and Television, Music, and Theater and Entertainment Arts, asked an important question: How can we use video to enrich the learning experiences of our students in the performing arts?

The Academy saw vast potential in video. It could be used to give students on-demand access to recordings of professional demonstrations from multiple viewpoints. It could be used to capture performances for self-review and assessment. It could even enable instructors to experiment with new blended learning pedagogical approaches like flipping their classrooms.

With so much potential, the Academy committed to making video a key part of their students’ academic experience, supporting a wide range of staff and student uses across campus. They called the initiative “Video in Pedagogy,” or VIP.

But in order to make VIP a success, the Academy first needed the right video technology.

Success in the performing arts might be showcased in expansive auditoriums and galleries, but the skills needed to make it there are often almost imperceptibly small. In a fine art like Chinese Opera, for example, actors are taught traditional and modern techniques for controlling their own body movement and facial expressions, as well as an array of stealthy cues that are all essential for simultaneously synchronizing the production on-stage with other performers, the music played by the band, and visual effects managed by off-stage technical crews.

Buck Ng, Senior Education Designer of the Innovation Hub at HKAPA and once himself a student of Chinese Opera, intuitively understood the potential value of being able to record and share master performances and tutorials for Chinese Opera students to use as an advanced study aid. “Students could watch, pause, and rewind videos of professionals in order to learn intricate details in technique such as body language and facial expressions, and apply what they observed in their practices,” he explained.

As the Academy discovered, however, making video useful to students was more complicated than simply setting up a camcorder and pressing record. As the institution began implementing its VIP initiative without a campus video solution, HKAPA encountered a few significant challenges.

Shortly after the introduction of the Academy’s VIP initiative, a few HKAPA instructors set out to record an actor performing Chinese Opera on-stage. With a single camera positioned in front of the stage, they captured the entire performance from the vantage point of the audience.

Quickly, however, the instructors realized that with only one point of view, their videos simply weren’t able to clearly capture important aspects of the performance that students would need to see. Details like how high an elbow is, how round the arms are, or how the joints are moving went in and out of view as the actor moved. Further, the single-source video only captured the performer on-stage, leaving out all the activity happening at the same time in the band and off-stage.

Academy instructors knew that capturing as many angles of a performance as possible would be necessary in order to help students learn from the master performers as they would if they’d been right there in the room watching. What the Academy needed was a video system that would make it possible to capture multiple camera angles. This would enable students to continually see the proper techniques, as well as to slow down, rewind, and watch a video as many times as they needed. It would also help students to watch how the elements of a production worked together and synchronized in subtle ways.

Instructors at the Academy saw another important application for video in performing arts education: student assessments. Just as dancers practice in front of mirrors so they can observe their form and technique, video recordings can be used to provide all performing arts students with an unbiased view of their own performances and presentations.

As the Academy had learned with recording master performances, here again, instructors found that having video that included multiple camera angles would be beneficial.

Multiple points of view would allow students and instructors to more accurately critique performances, thereby providing students better feedback about body movement, eye contact, and other details that might not be apparent when filmed with one camera alone.

Further, to make video truly useful as part of delivering feedback on student performances, instructors soon realized they needed a means to connect their specific critiques to specific moments in the production. If a student’s posture faltered twenty three minutes into the show, instructors found students were better able to recognize and correct the error if the feedback included a time stamp of precisely when the mistake was made. Yet the Academy’s early video options didn’t enable in-video feedback, leaving instructors to search for workarounds to provide their students with those essential details.

In order to fully support its Video in Pedagogy initiative, the Academy needed a video solution that could not only capture many video feeds simultaneously, but one that would also make it easy for faculty and students to create, watch, and interact with their recordings anywhere and anytime, on-demand.

In searching for the right solution, HKAPA compared several video software options. At first, however, none of the solutions they found could record from more than three video sources or capture more than three screens at a time. Academy administrators worried that adoption would be a challenge for these systems, given the complicated setups and workflows that were typically required.

Then, the Academy found Panopto.

Here is why the Hong Kong Academy for Performing Arts decided Panopto was the right video platform for supporting their students’ learning experiences:

With Panopto, HKAPA staff could include an unlimited number of video sources in a single recording. Instructors could decide which points of view they wanted to record, set up a camera in each position, then simply connect each camera to the computers they were already using. Instructors could even use a variety of video sources, from specialty cameras to mobile devices. In every case, Panopto’s multicamera recording capability would automatically recognize each device and synchronize their video, making it easy for both educators and students to capture many different viewpoints and present extra information on-screen or in slides within a single video.

Staff and students could also use Panopto to record videos from anywhere with just a laptop or smartphone, without IT support, which meant that the software offered a wide degree of flexibility to support and inspire new video-supported teaching methodologies.

Not only could Panopto help instructors to capture more of a performance, the video platform also included support for smart playback features that would help students at the Academy to personalize and deepen their learning experiences.

With Panopto, students see more than just a picture-in-picture view. Panopto displays video feeds side by side in a mobile-ready video player. When multiple video sources are included in a video, instructors have the option to use Panopto’s web-based video editor to switch between viewpoints, or to allow students to toggle between screens and video feeds as they see fit, enlarging any view they choose. Students can also slow down and speed up video playback as needed, and add notes or bookmarks where they like.

The Panopto video player also makes giving and receiving feedback within assessment videos easy. With timestamped notes and discussion threads, instructors and other students in the class can leave comments and feedback to start a dialogue regarding what was done well and what needs improvement.

Panopto includes native support for in-video quizzing, making it easy for instructors to add questions in their videos to check student comprehension and reinforce key concepts. For HKAPA, this would also enable educators to record more of their lectures and experiment with popular flipped classroom methodologies.

Panopto’s video platform seamlessly integrates with Canvas, HKAPA’s campus learning management system (LMS). That meant that staff and students could record, share, and playback videos simply by logging into the same place they already go for course materials and other resources and information. 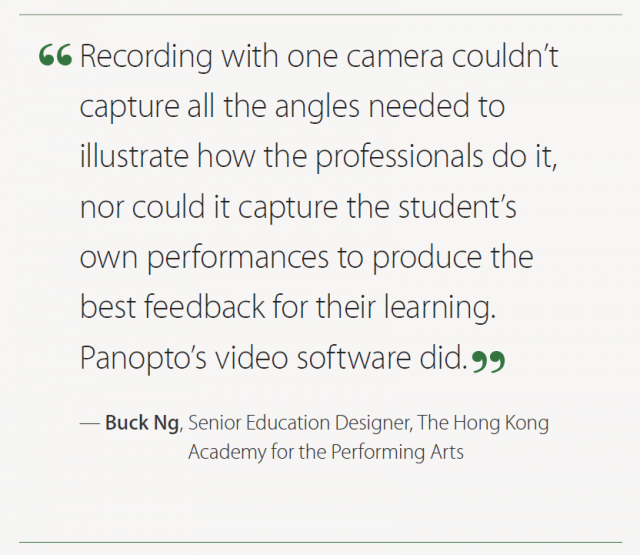 The academy rapidly deployed Panopto, provisioning six learning spaces for multi-camera video capture in a single day. Included in the deployment were several specialized facilities: a studio for Chinese Opera, one recital hall in the music school, and two studios in the School of Dance, along with two general usage classrooms. In each classroom or studio HKAPA set up multiple cameras around the room, as well as another camera overhead, with every feed connected to Panopto.

“Recording with one camera couldn’t capture all the angles needed to illustrate how the professionals do it, nor could it capture the student’s own performances to produce the best feedback for their learning. Panopto’s video software did,” said Ng. “Panopto also includes notes, discussions, and other interactive features in its video player that truly enhance learning and influence student outcomes. We couldn’t have made as big of an impact on learning without Panopto.”

“We use Panopto to record multiple angles from the classroom then broadcast through our video conferencing system to other classrooms in Beijing, for example,” said Ng. “Panopto has become an essential tool for distance learning.”

With Panopto, Ng was able to support the video-based educational designs for performing arts students in exactly the ways he had envisioned. Having seen the Video in Pedagogy initiative through from its inception, Ng is looking forward to seeing educators on campus find even more uses for Panopto in order to truly transform the learning experiences for students at the Academy.

About the Hong Kong Academy for Performing Arts

Aside from the main campus in Wanchai, Béthanie, the site of the institution’s Landmark Heritage Campus in Pokfulam has housed training facilities for the School of Film and Television since 2007.