Put Down That Notebook! New Studies Find Taking Notes Is Bad For Your Memory

It’s happened to everyone.

You’ve sat attentively through a meeting or a class. You’ve taken page after page of notes. You’ve fought through the hand cramps (if you’re a traditionalist), or the temptation to check Facebook (if you’re the modern type).

But when the session ended and you stepped out the door, you’ve been struck with a funny realization — you can’t remember a single thing that was just said.

Related Reading: How to Record ANY Online Meeting

The good news is, you aren’t alone. In fact, new research has begun to suggest that instant-forgetfulness is actually common for almost everyone — and that it might be the act of taking notes itself that’s to blame.

Bloomberg Business summarizes the findings in a recent article, Taking Notes Kills Your Memory. The human brain, it appears, is wired to recognize when information is being documented, and to “intentionally forget” that info so as to be able to free up room for other things. The brain assumes that since the information is written down, there’s no need to remember it.

While it’s true that one of the benefits of taking notes is creating a reference for later, these findings should give us all reason to pause and reconsider the rationale most of us offer for taking notes in the first place — to help us remember. It turns out, taking notes instead may simply be signaling to our brain instead to forget everything as quickly as we can write it down.

Study after study has shown that the best way to help the brain remember is to actively engage with the information.

In school, that might mean thinking critically about information presented and answering questions in class, participating in discussions or experiments, and discussing the materials with peers.

At work, that often means actively participating in meetings, sharing ideas and asking for clarifications, and also taking in colleague’s complete presentations, so as to be able to critique the overall proposal.

In both cases, taking notes gets in the way of that level of cognitive engagement with the materials at hand. Writing out notes commands focus on individual points rather than overarching themes.

Given the findings above, taking notes may be the worst of all options — not only do you miss the big picture, but you let your brain know it’s okay to forget the details too.

Active participation in your classroom or conference room corrects that learning behavior, signaling to your brain that this material is absolutely important to consider and remember. And it never hurts to get recognized as the person who’s willing to speak up, ask questions, and share ideas.

What About Creating A Reference Document?

While it’s likely that we won’t always need the notes from any given meeting or class, it certainly is nice to have something to fall back on. And that’s where technology can make things a whole lot easier.

Today’s schools and universities have pioneered a new means of recording the details of their classrooms, tapping video to capture class sessions in full. Thanks to inexpensive cameras and simple, flexible video platforms like Panopto, lecture capture has become a regular part of many learning environments — enabling students to go back and rewatch anything they’ve missed, search for specific moments and concepts, and get access to every last detail covered, without needing to put pen to paper. 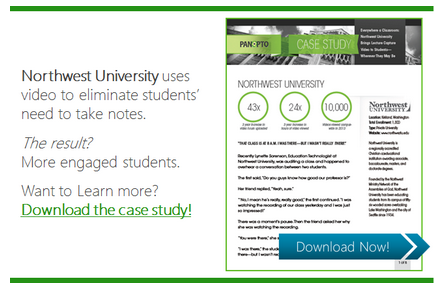 Best of all, by eliminating the need to take notes, lecture capture technology enables students to participate more freely in class. Northwest University has noted, “with Panopto in place, the stress of attempting to record or write down every last possible detail of each lecture was eliminated. Instead, students can focus on the central ideas of the discussion, internalizing the material more effectively.”

Many businesses, too, lean on the same technology to record meetings, discussions, conferences, and more. It’s an increasingly common way for professionals to record kick-off meetings, project discussions, and other essential project conversations. With a simple webcam or mobile phone, participants can record the meeting in full — freeing themselves to participate actively knowing that the details will be captured. Those recorded meetings can then be quickly shared with selected participants and executives via the corporate YouTube for anyone who may want to revisit them.

Watch a project status meeting captured with Panopto below:

Panopto’s video platform connects with any just about any recording device and integrates with leading video conferencing solutions so you can capture and share important presentations and discussions by simply pressing record. Panopto automatically optimizes your videos for easy playback on any device and makes every word spoken or shown in the video searchable. So stop taking notes and start capturing everything in a searchable video – at the press of a button – with Panopto.

Record your screen with Panopto Express! With just a few clicks you can record and save searchable video notes from your browser, without downloading any software or plugins. Try it now, it’s free!