Recently, we had the opportunity to test a camera that aims to solve these problems — the VSNMobil V.360° HD. In this blog post, we’ll introduce you to the 360-degree camera and discuss how it works with Panopto. Before we get into the details though, let’s see an example team meeting captured using the V.360.

Businesses and universities who visit the VSNMobil website may mistakenly think that they’ve arrived at the wrong place. The V.360° was originally built as an action cam, targeting sports enthusiasts who want to record and share their mountain biking, skateboarding, skiing, surfing (it’s waterproof), and other outdoor adventures. The website reflects the product’s origins, but don’t be fooled by homepage video of the longboarder with all-terrain wheels — the camera is one of the more innovative video capture devices to hit the business market in the past year.

Several characteristics of the camera make it a great device for recording meetings.

First is its price. At $399, the V.360° is less expensive than many consumer-grade camcorders, and it’s a fraction of the $3,000 or so you’d pay for enterprise 360-degree conference cameras for like Polycom’s CX5000 (formerly known as the Microsoft Roundtable).

Second is the camera’s small form factor. It’s just under 4 inches (101mm) tall and just over 2 inches (56mm) in diameter. This makes it a great portable solution that can be carried from conference room to conference room. It also makes it less obtrusive than larger 360-degree cameras when sitting in the middle of a conference room table.

Fourth, the camera’s distortion control is pretty impressive. 360-degree cameras often create a fisheye effect or bending of vertical lines based on how they capture and stitch together images. In our testing, and in the video sample above, the mild distortion from the V.360° didn’t detract from the viewing experience.

Related Reading: Why Recording And Sharing Company Meetings Is Good For Business

Fifth, the camera includes different formatting options for your videos. By default, it records a single 6480×1080 panorama. In the sample above, we used the stacked view, in which the V.360° splits the 6480 horizontal pixels in half and presents the video as two 3240×1080 strips. We found this view easier to watch on standard video players. 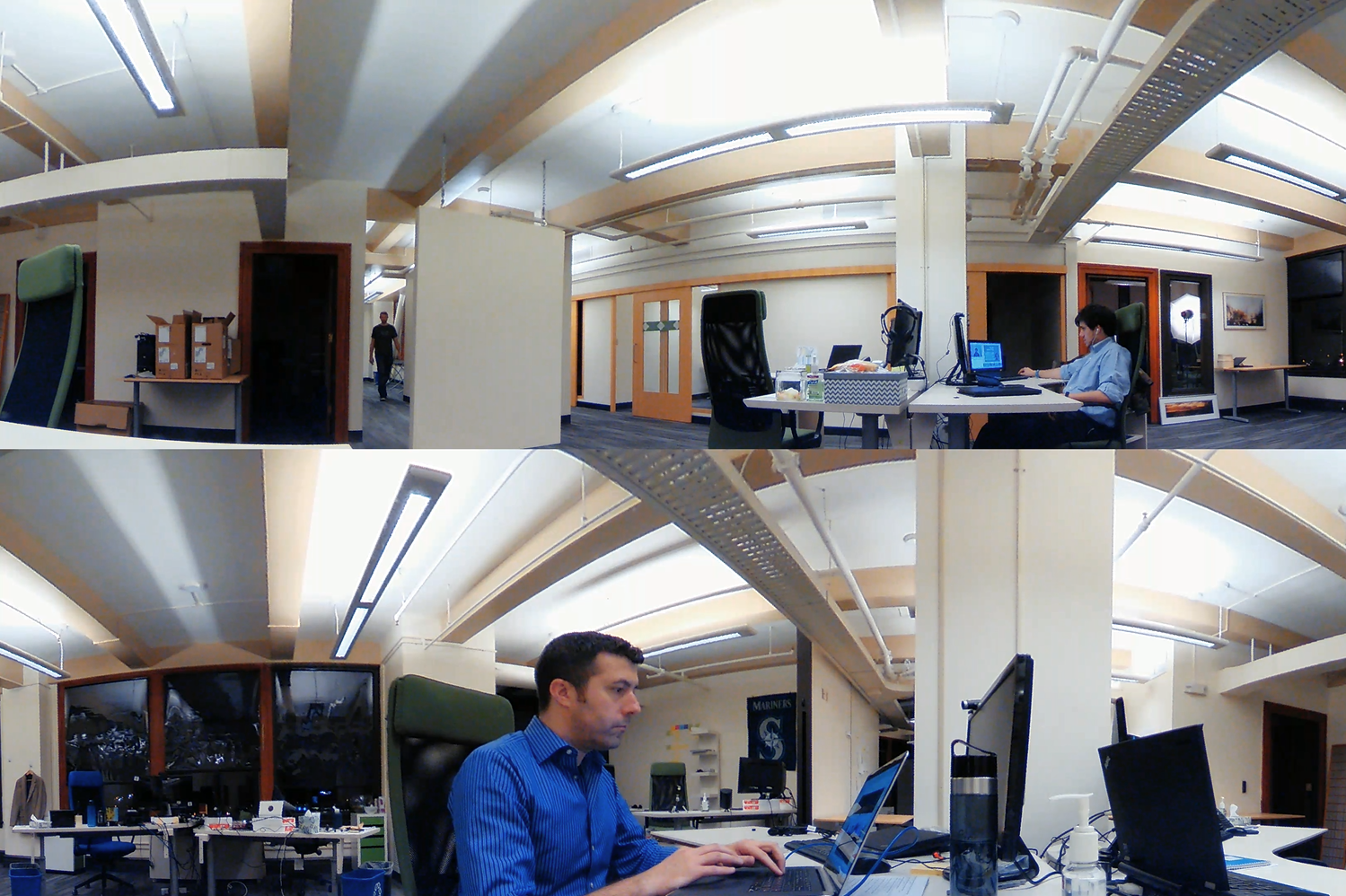 Finally, the camera has decent built-in audio capture. Two pinhole mics on the body of the camera capture stereo sound, which we found to be clear even when recording meetings in an office with substantial street noise.

Panopto was built to capture or live stream video input from any device that can be recognized as a camera by Windows or MacOS, and the V.360° is no exception. Here’s how we set up the camera for the sample team meeting. 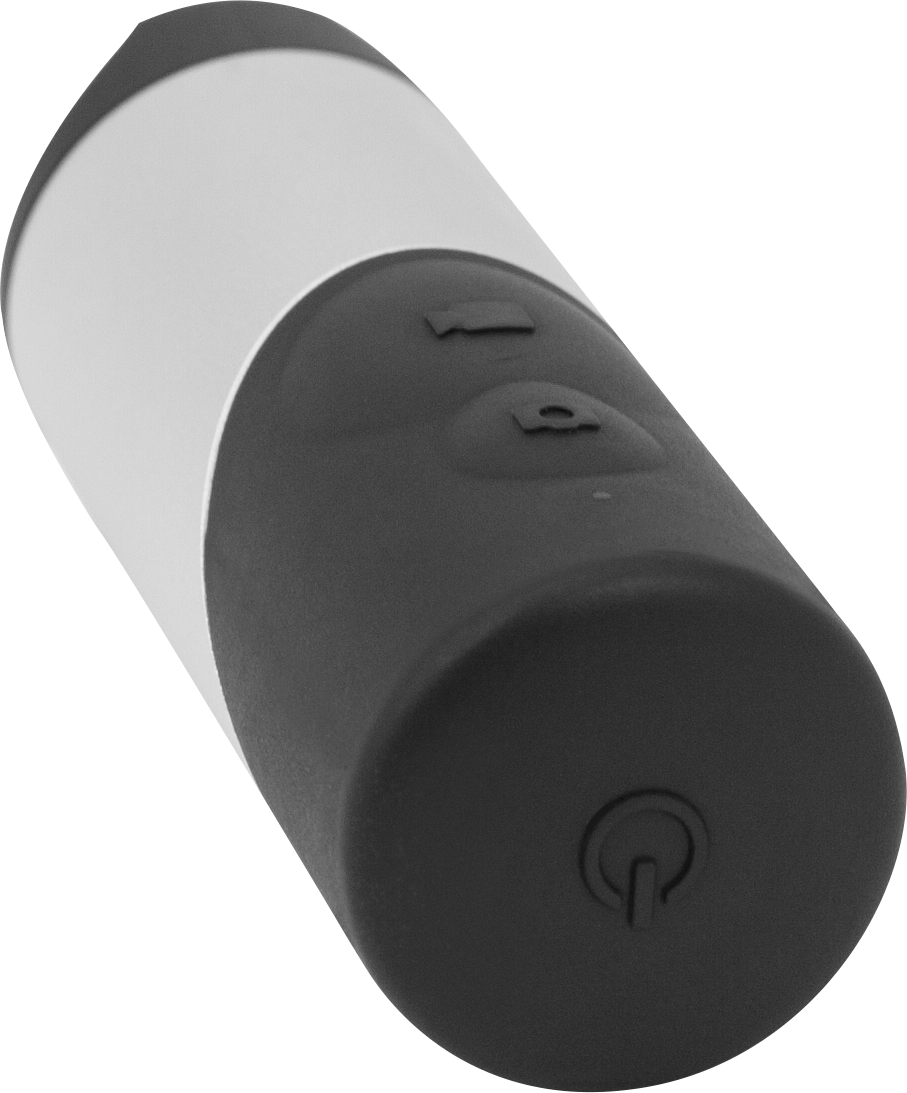 Turning on the camera and configuring its settings is fairly straightforward, and accomplished using a small remote (see image right) and a mobile app that runs on iOS or Android. The key configuration settings include video resolution (6480×1080, 3840×640, 2880×480, and 1920×320) and white balance (which we left set to Auto).

Once the V.360° is configured, you have two video capture options. You can either record to a micro-SD card in the camera and then upload the file to Panopto, or you can connect the camera directly to your desktop or laptop and record using Panopto’s video capture and webcasting software. If you’re recording the video feed directly with Panopto, you’ll need to use an HDMI to USB 3.0 adapter. In our tests, we used the palm-sized Magewell XI100D.

With the V.360° plugged into your laptop and the Panopto software running, you’re ready to record. As with any other video source, you can record it by itself, or in conjunction with other video feeds. In our sample video, we add a second feed — a screen recording — at 1 minute, 40 seconds.

How much could your organization save
by making it easier to record videos?
Calculate Your Savings

The current release of the V.360° is quite capable as a meeting capture device. Of course, like any technology, there’s room for some improvement. Here are four features we’d love to see VSNMobil introduce in future releases.

Whether you’re using the V.360° HD, a webcam, a professional video camera, the Polycom CX5000, or an iOS device, Panopto’s video platform makes it easy to capture, share and search all of your meetings. Contact us for a free trial of our software.

Getting More From Your Meetings