The essence of information is in the details.

The details are what takes a hopelessly aspirational concept and build it into a practical reality. When in 1962 President John Kennedy challenged the United States to put a man on the moon before the end of the decade, that was but an aspiration — a great concept that could direct the thoughts and efforts of a nation. But ideas cannot thrive in concept alone; details are essential. And in the space race, it was the efforts of North American aviation on behalf of the National Space and Aeronautics Administration that saw the goal of setting foot on the lunar surface brought into pragmatic deliverables, assembled in a series of steps now known as the Apollo Program. Apollo took the idea of going into space and offered details in the form of a Command Module, with it’s docking assemblies, reaction control systems, interior cabin arrangements, and ever critical Earth landing systems. And that alone only offered seating and control to the Apollo pilots — propulsion systems, electrical power systems, environmental control systems, communications systems, and reaction control systems were all designed, blueprinted, and constructed to painstaking precision well before the age of six sigma production standards, and even though this list only scratches the surface of the magnitude of the task involved in launching human beings into space and ensuring their safe return, we’ll stop here because you stopped reading a good seven lines ago.

Wait, what was that?

That’s why details shine better in presentations than in text alone.

Presenting ideas — sharing information with a combination of speech, imagery, text, and movement — helps to capture your audience’s interest and hold their attention, even when you delve into the details. Recording that presentation, meanwhile, helps you to build a resource — a file you can share so that anyone can refer to it in the future to revisit those details again.

This week we saw more educational and entertaining recordings among the latest presentations shared online with Panopto. And in the spirit of passing it on, these are just a few of the ideas shared this week with Panopto’s video presentation software. 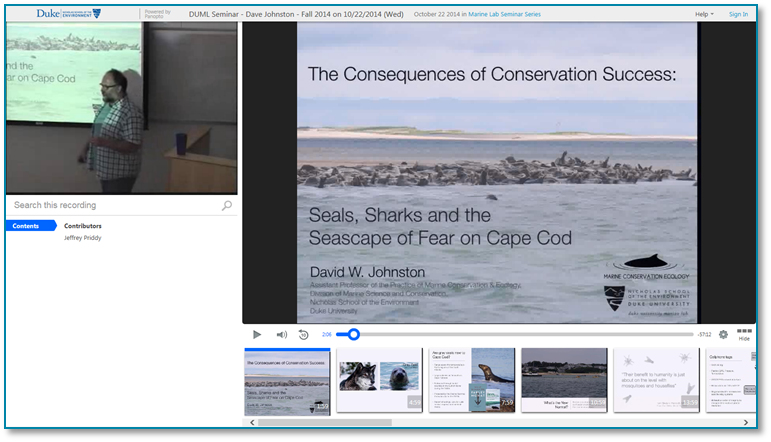 The Consequences of Conservation Success: Seals, Sharks and the Seascape of Fear on Cape Cod

Join Dr. David Johnston of the Duke University Marine Lab for this recorded live webcast of the university’s fall seminar on what happens when conservation efforts begin to succeed. Dr Johnson takes the northeast coast of the United States as his case study, and looks into the effects that the reemergence of the gray seal has had on the local environment. 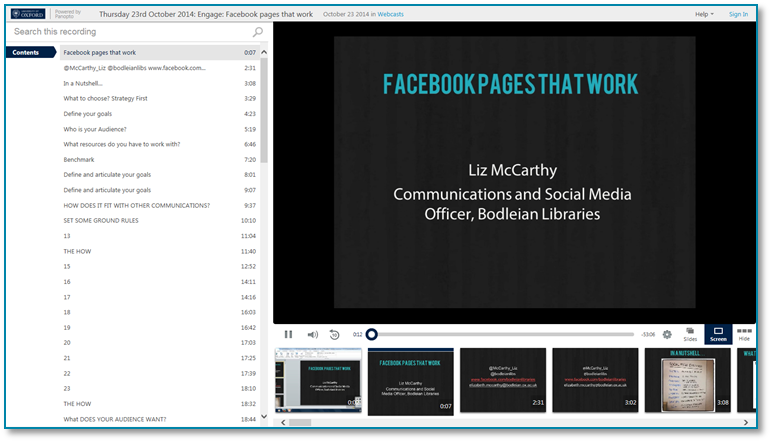 Oxford University’s Liz McCarthy shares this flipped classroom recording of her best practices for creating Facebook pages that work. McCarthy’s discussion transcends the technical, and asks viewers to define their audience and their goals for engagement, as well as offering numerous smart recommendations for designing a social presence that works. 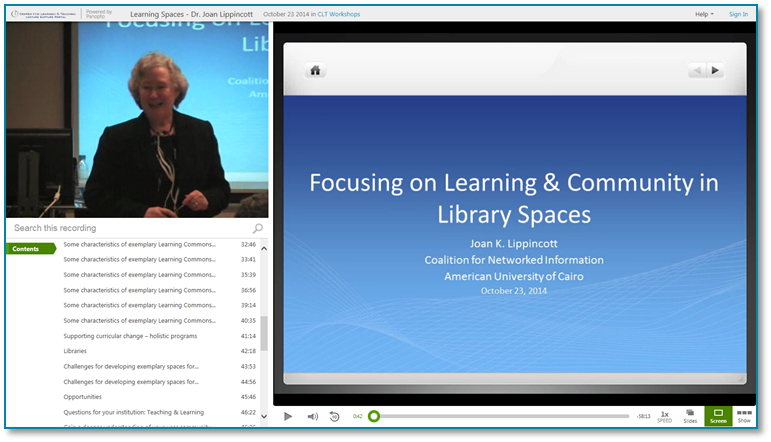 Dr. Joan Lippincott of the Coalition for Networked Information shares with the American University of Cairo her ideas on the technologies and infrastructure that will comprise the libraries of the 21st century. In this recorded lecture, Dr Lippincott introduces exemplary library spaces that invite both learning and community, and that also include support both for students and technology. 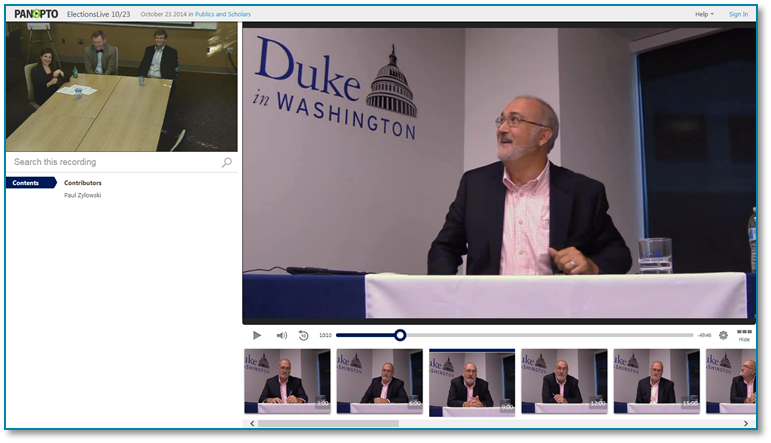 This sixth installment of Duke University’s panel discussions on the upcoming US national elections turns its focus from national and international issues back to the issues of local concern. Sit in on the conversation to hear how today’s issues in North Carolina will both affect and be affected by federal elections.