You’ve never heard of J. Frank Duryea. But you know his work.

Not for the improbability of his invention. Others were working on the same challenge when Duryea found the solution, and it’s likely the world wouldn’t have waited much longer for the answer should Frank have chosen another endeavor.

Nor is it for the prominence of his company. After all, it only operated for 20 years. A full century’s passed since it folded.

Frank Duryea and his brother Charles invented the first gasoline-powered automobile in America, way back in 1894. Their company, the Duryea Motor Wagon Company, was the largest automobile factory in the US for a number of years (of course, at nowhere near the production levels Henry Ford would soon achieve).

But those aren’t the reasons why anyone might know Frank.

What put Duryea in the history books was not his prowess as an engineer, but his many demonstrations of the potential of his invention.

In the 1890’s a road was any lane sufficiently wide enough for a horse and solid enough that most of the time people wouldn’t slip and fall while walking on it. The notion that an engine of any type could pull a wagon without a horse was novel, but the idea that a horseless carriage could operate on even the best 19th century roads bordered on laughable.

But on that point, Duryea set out to change minds. He brought his invention everywhere, demonstrating to every audience how well his car handled on most every surface.

And then in 1895, he made the presentation that set the course for the next century of American transportation.

On a snowy Thanksgiving morning in Chicago, Duryea and his automobile completed the much-anticipated Chicago Times-Herald race, a 54-mile loop from Chicago to Evanston. Fighting weather that kept even the horses indoors, Duryea’s crossing the finish line (and the glowing press that followed) demonstrated to an eager American public that the automobile was indeed ready to replace the horse and buggy.

Often the greatest challenge in winning support for a new idea is not simply proving that something can be, but rather, proving that it can also be valuable. Duryea’s race was a perfect presentation that his invention would be not only novel, but eventually, essential.

Today inventors and idealists still rely on presentations and demonstrations to show their audience just how the world could be. Unlike in 1895, however, we don’t need to wait for the press clippings — with video, it’s possible for anyone to record a presentation and bring their ideas to life for the world, live and on-demand. 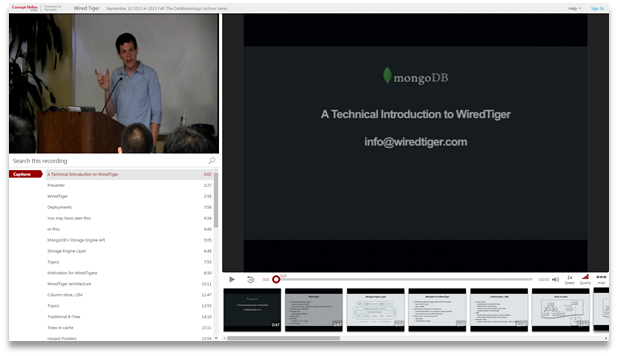 A Technical Introduction to WiredTiger
The number and variety of solutions available for data management today may well be too vast for the databases of a generation ago to store. Join the students at Carnegie Mellon and learn what there is to know about one of the latest growing names in the space, WiredTiger. WiredTiger is an high performance open source extensible platform for data management — in this introduction, you’ll get to know the system inside and out, including technical architecture, in-memory performance, record-level concurrency, and planned future features. 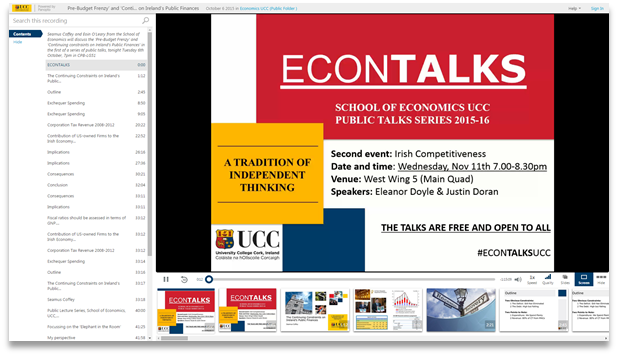 ECONTALKS – UCC School of Economics Public Talks
Ahead of the setting of Ireland’s national budget, Seamus Coffey and Eoin O’Leary from the University College Cork School of Economics will discuss the ‘Pre-Budget Frenzy’ and ‘Continuing constraints on Ireland’s Public Finances’. The talks provide a detailed look at the contemporary fiscal position of the nation, and offer ideas for the country to better take advantage of economic opportunities. 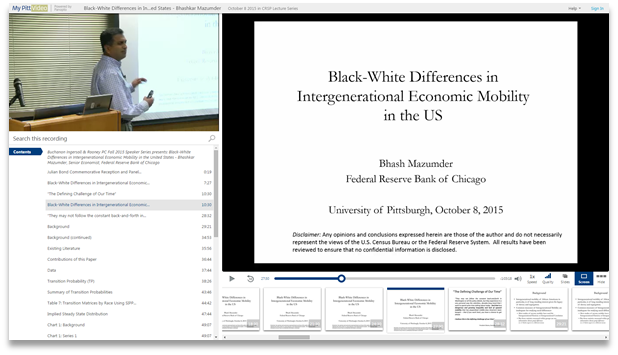 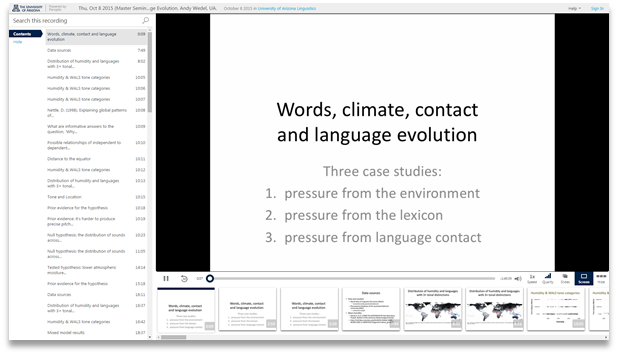 Words, Climate, Contact, and Language Evolution
Andrew Wedel, Associate Professor in the University of Arizona Linguistics Department, shares this recorded lecture looking into the broad history of the evolution of human language. Wedel digs into how pressures from the environment, local lexicons, and external dialects combine to influence the overall develop of language in our species. 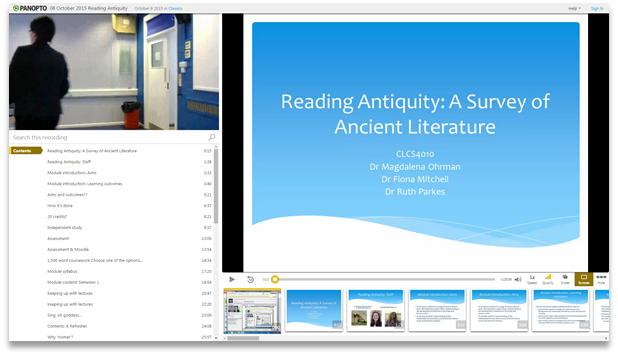 Reading Antiquity: A Survey of Ancient Literature
Sit in with the University of Wales honours programme in classical studies and creative writing, for this fascinating look into the archetypes of ancient literature. Learn more about the features of oral poetry and the role of the storyteller in ancient works. Then, dig into the contrasting Iliadic and Odyssean narrative structures and how they’ve informed literature into modern day.

Try It For Yourself