Earlier this year, Moore’s Law turned 50. For the last half-century, the observations and predictions of Gordon Moore have continued to revolutionize computing devices, making them dramatically faster, cheaper and smaller every few years. Although the law is most often invoked in reference to the laptops, tablets, and smartphones we use on a daily basis, it’s also had a transformative effect on the AV tech we use to capture and live stream video.

In just the past few years, the capabilities of video capture devices have grown substantially while being packed into increasingly smaller form factors. Webcams like the Logitech c930e can live stream crystal clear 1080p video at up to 30 frames per second from even low-end laptops. The iPhone 6 camera is a modern marvel in video capture technology, with the ability to reliably record 1080p video at up to 60fps with high-quality image stabilization.

There is, however, another class of AV tech that is arguably an even more impressive example of Moore’s Law than these consumer webcams and smartphones cameras. Plug-and-play external USB capture cards (often referred to as “USB video grabbers”) are quietly revolutionizing the way that businesses and universities record and live stream video.

An Overview of USB 3 Video Grabbers

External USB capture cards perform a task traditionally assigned to internal PCI capture cards or dedicated video capture appliances. They enable video to be captured from a wide range of sources, including those that output to VGA, DVI, HDMI, and HD-SDI. They typically support resolutions up to 1080p and frame rates up to 60fps. Some support two or more channels of video along with audio, providing turnkey capture of multi-camera events and multi-source video presentations.

Most importantly, because these devices output to the USB 3.0 standard, they do something that PCI cards and dedicated appliances can’t. They enable Windows and Mac laptops to act as the video capture station. The result is a completely portable multimedia recording and live streaming solution built on inexpensive, commodity hardware.

Video grabbers typically come in two form factors—dongles and boxes. A growing list of AV technology vendors, including Magewell, Epiphan, and Inogeni are expanding their product lines to include more of these devices.

Size and portability are the most obvious benefits of USB video grabbers. In just the past two years, these devices have gone from “pleasantly small sitting on a desk” to palm-sized. Boxes like Magewell’s XI200XUSB, which offers two channels of HD video via DVI inputs, measures 98mm x 98mm x 25mm (length x width x height). Epiphan’s DVI2USB 3.0 dongle is even smaller at 90mm × 60mm × 23mm. Most impressive of all is Magewell’s XI100D, measuring just 92mm × 40mm × 12mm. Any of these devices can easily be thrown in a bag and brought onsite for a video shoot. 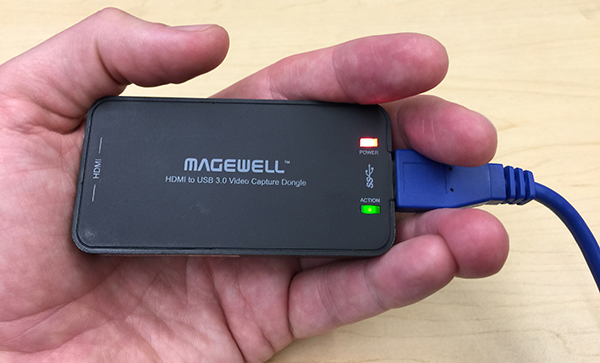 Magewell’s XI100D HDMI to USB is small enough to get lost in your backpack.Other benefits of external USB capture cards include:

Flexibility: Because USB 3 dongles and boxes include inputs for VGA, DVI/HDMI, and HD-SDI video sources, they enable recording and live streaming from nearly every class of video source used in businesses and universities today. This includes consumer camcorders, professional video cameras, DSLR cameras, PTZ devices, and document cameras. It also includes laptop and desktop computers, from which high frame-rate screen recordings can be captured.

Quality: HDMI to USB 3.0 capture dongles like the Magewell XI100D enable uncompressed video capture at up to 1080p60. As we’ve discussed in previous blog posts, this is the highest resolution and frame rate where most people can perceive differences in the smoothness and quality of playback on laptop, tablet, and desktop screens. In addition, USB capture cards that support HD-SDI benefit from features often expected by professional AV teams, such as locking connectors, cable lengths of up to 300 meters, and embedded timecodes. And because these devices support input from professional-quality video cameras and DSLRs, they benefit from these sources’ ability to capture video with a wider dynamic range and shallow depth of field.

Price: Like all computing tech, USB video grabbers continue to drop in price. Higher end models like Magewell’s 2-HD channel XI200XUSB are currently listed at just over $1,000. Epiphan’s DVI2USB 3.0 is currently $699. Inogeni’s 4k2USB3 dongle lists at $395. And Magewell’s XI100D is an affordable $299.

Epiphan’s DVI2USB 3.0, which currently retails for $699Software Integration: Most USB video grabbers come with drivers and configuration software that enable them to appear as any other USB video source to Windows and Mac OS. As a result, the dongles and boxes typically integrate well with popular video call, web conferencing, and video streaming software. Some video streaming apps, like Panopto, take the integration a step further. Specifically, we gather information on the device’s capabilities at runtime and automatically configure our software to maximize the quality of video captured through the device.

Driverless: Increasingly, USB capture card manufacturers are implementing their devices using standard USB Video Class (UVC) drivers. This is the case with Magewell’s XI100D. Because UVC drivers are included on desktops and laptops running Windows and Mac OS, and are used by most webcams currently in market, USB video grabbers that use these drivers require no additional software to be installed. They provide true plug-and-play, professional-quality video capture.

In our Seattle headquarters, we’re big fans of Magewell’s XI100D HDMI-to-USB 3.0 dongle. It’s the smallest, lightest-weight external USB capture card we’ve found to date. It’s build quality is solid and its use of UVC makes it a turnkey solution for all of our recordings and live-streamed events.

Is This The End of Large Form-Factor Appliances?

Not yet. There is still a place in many businesses and universities for dedicated AV appliances, typically in cases where:

That said, the implications of Moore’s Law on AV hardware are inescapable. In the next few years, the devices we use to capture and live stream video will continue to become smaller and cheaper. And with the capabilities already available in dongles like the Magewell XI100D, the market end of road for dedicated appliances may not be here yet, but it’s not too far off on the horizon.

If your organization is implementing live and on-demand video to enhance your internal and external communication or learning and development programs, we’d love to chat. Panopto provides the industry’s first end-to-end video platform for recording, live streaming, video content management, and video search. Our video capture software works with a wide range of cameras and capture devices, including those discussed in this post. Contact us to sign up for a free trial of Panopto today.