What’s Behind the Growth in Live Streaming in the Enterprise?

The rapid rise in the popularity of live streaming has prompted many organizations to consider how they might use the medium to engage customers and employees.

As is often common with new technologies, marketers conducted the first experiments. Live streaming on social media platforms like Twitter’s Periscope, Facebook Live, or even the newer YouTube Live has proven to offer brands another avenue for telling stories and engaging consumers in conversation. It also opens the door to broaden the reach of the business in a way that traditional social media content can’t.

Most businesses these days, regardless of whether their customers are individual consumers or businesses, are engaged in content marketing — creating blogs and other content, and promoting it in social media. Video has emerged as a high-performing medium in this space. Eighty percent of people report they prefer watching a live video to reading a blog, and 82 percent prefer live video to social posts. And lest you think this is purely a millennial phenomenon, even 3 in 5 senior business executives report they’d rather watch a video than read text.

But the potential value of live video extends far beyond the marketing department.

When it comes to engaging employees, the research suggests live streaming is just as effective as it is with consumers. According to a recent Wainhouse Research survey, 92 percent of employees report that live video enhances their engagement with an online presentation.

So why is live streaming such an effective way for businesses to communicate information?

Here are the three reasons live streaming is good business:

1. Live video unites workers across locations. Live events are only valuable if your people can actually attend them. For businesses with remote workers, multiple locations, or employees who simply can’t physically attend a major all-hands event, a live stream can be a very effective “next best experience.” And it can easily be broadcast to thousands of people anywhere in the world at once. The universal availability of live streaming helps build a sense of unity among everyone that supports the company.

2. Live video helps presenters communicate more. Ninety percent of human communication is nonverbal. Video enables brands and leaders to present messages with more humanity and nuance than is possible with written text. The transparent and candid nature of live video can even help build trust with almost any audience, providing the opportunity to forge stronger relationships with customers as well as to inspire employees toward company goals.

3. Interactive live video creates richer experiences. When audiences can ask questions, share feedback, and participate in a conversation they become more deeply engaged in those experiences. For both customers and employees, an interactive live stream can deliver a personalized experience that leaves a lasting impression.

Expensive and Complicated: The State of Live Streaming from Not So Long Ago

With so many obvious benefits, why does it seem that businesses are now jumping on the bandwagon? Quite simply, the technology has changed.

Streaming video live online used to be a costly and technically complicated endeavor for a business. Every live stream was a high-wire act. And no organization was assured success. Even established tech titans like Apple and IBM found themselves “experiencing technical difficulties” in unfortunate, high-profile live stream failures. Moreover, a popular live stream could threaten your network bandwidth, slowing down the normal flow of data and disrupting productivity.

And the problems didn’t end there. Even if you could stomach the complexity of setting up a reliable live stream on your network, you still had to contend with a whole set of other factors that tended to make live streaming prohibitively expensive.

As a result, for most organizations, live streaming was only really an option for large-scale conferences or flashy media events. Nothing else was worth the investment or the heartburn.

That said, there is a time and a place for everything, and even in the age of exceptionally complex live streaming, from time to time most every organization found reasons to want to share an event or announcement live with the world. And in those cases, there were really two options firms could choose from to support their live video aspirations: Hire an outside vendor, or build a live streaming solution in-house.

Let’s take a moment and dig into what was involved with each.

Option 1: Hire a Vendor to Live Stream and Record an Event

With so many technical hurdles to overcome and so many day-of processes to manage, it’s no wonder so many organizations usually chose to enlist a third-party company to oversee live streaming and recording for their events.

Working with specialists, however, always comes at a cost. Which meant that for each activity you chose to live stream, you would be paying a vendor to do much of the following:

Planning to record and live stream an event requires making decisions early on about what you want to capture on video, what audio you’ll need to capture (including any multimedia resources presented during the event), as well as technical considerations needed to deliver a flawless live stream to an online audience. This work would typically start drawing on your budget months prior to the event itself.

From that planning, your vendor will scope the crew they need for setting up, capturing and streaming the event, the equipment needed, and hours required to produce the event.

The people needed to execute your live event would vary greatly depending on the number of cameras that would be recording, the complexity of the audio feeds, whether presenters would be using a teleprompter, and more. For a live event, the production crew might include one or more of the following roles:

Of course, every additional person added to your total expenses, and as each member of the team was a specialist in their own right, those costs could escalate quickly.

Along with a staff of specialists, live streaming also used to require a lot of complex and specialized hardware. This equipment, too, was expensive, and typically only large enterprises purchased it for themselves. Instead, companies would simply pay for the tools on a per use basis as part of their contract with their live streaming vendor.

For many organizations, the cost of the equipment required for live streaming was often a surprise (especially so for the first few events live streamed). Because while simple recording may not require much more than a camera and a mic, live streaming needed far more.

Here’s a short list of some of the AV equipment you might have needed to create your live video feed:

All together, it’s a lengthy list of expensive, specialized equipment. And most organizations had no good options to bring down costs. Purchasing all that equipment required a serious investment, and many of those tools would become obsolete before they’d recouped their value. On the other hand, paying a vendor per-use virtually ensured the organization would be paying top dollar every time.

Travel to the venue, set up the equipment, and execute the live stream

Once the crew and equipment were settled on, the next question was the most important one: how to actually execute the live stream on the day of the event.

Day-of production could be rife with expenses, and depending on the size of your crew, you could expect to be paying for the travel time, equipment setup, meals, dry runs, execution the event itself, and then teardown after everything is complete — for every person on the crew.

For many organizations, the day-of costs alone for live streaming would take up a considerable portion of the overall budget.

Working with vendors to live stream an event was often the easiest way to ensure a professional-looking, network-friendly outcome. But the cost involved was often substantial — so substantial, in fact, that it prompted more than a few organizations to explore whether they may be able to produce live video on their own.

Once an organization had built up the will to live stream more than a handful of conferences or announcements each year, the cost of relying on outside vendors would, sooner or later, inspire someone on the team to ask whether it would make more sense to invest in building support for live streaming in-house.

For many businesses, the numbers would indeed pencil out — although in most cases, not for quite some time after the initial investment. And while these homegrown solutions for live streaming were invariably as unique as the companies that built them, here are the basics of what was required:

As companies learned when working with vendors, supporting live streaming requires more than a few cameras and microphones. Also needed were video switchers, audio mixers, and miles of cables to set up live events and presentations for streaming, as well as the following:

Of course, the problem with hardware is that it can become outdated quickly as technology evolves — and the relative newness of live streaming meant that the related technology was indeed almost constantly changing. As such, maintaining a system like this almost always cost more over its lifetime than just the initial purchase and implementation expenses.

Moreover, even owning the technology outright didn’t always help you sidestep future expenses, especially related to scaling up your live streams. For example, if you’d invested in a live streaming server meant to support up to 1,000 viewers, and one day you found out you needed to be able to support 10,000, you had no choice but to go back and spend more to upgrade. The alternative was rather unpleasant — the inability to support a large enough audience was a root cause of several of the most public live streaming failures of the last decade.

The other challenge organizations faced when supporting live streaming in-house (or any video streaming on the corporate network for that matter) was ensuring that their network could deliver video content smoothly and without compromising the continued flow of other potentially mission-critical data.

The reason for that is simply that videos aren’t like other files. Videos are massive. One single minute of video recorded with an iPhone X at 1080p resolution will create a file roughly 175MB in size. To illustrate just how big that is, let’s compare it to a massive text-based document. Leo Tolstoy’s War and Peace is a hefty 1440-page tome consisting of over 587,000 words, yet it takes up only 2MB as a Microsoft Word document. That’s just 1.1% of the size of our 60-second recording!

With so much bandwidth required to stream video, many companies constructed video-specific “overlay networks” that ran on dedicated streaming servers, enabling the company to stream video without the threat of overwhelming everything else happening on their primary servers.

Financially, this required organizations to maintain two separate networks, increasing the IT infrastructure costs. In addition, this configuration increased the complexity of the corporate WAN, introducing more risk for failure (particularly during a live stream) and making managing networks more challenging.

Ten years ago the rapid pace of change in video technology made it unthinkable for most businesses to support live streaming in-house. But today, that change has finally created an ecosystem where it would be unthinkable not to live stream your own events. HD cameras are now cheaper and smaller, computers are now more powerful and capable, and new software has now eliminated the need for the specialized hardware and custom overlay networks that used to be required for streaming video.

These days it’s possible to live stream without the need to hire large, expensive production teams or to source mountains of specialized equipment or even to set up complex overlay networks for streaming on your WAN. 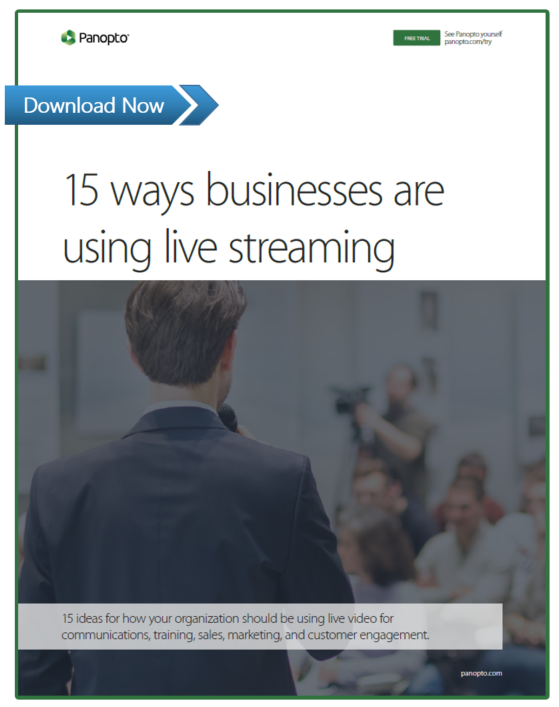 And not only is it possible — it’s actually surprisingly easy.