This week at academic institutions around the world marks the start of finals season. Educators are opening extra office hours and curating semester study guides, while students attempt to make the most of each waking moment to commit each of those last little details to memory, add the last few supporting points to their papers, and run down one last time their final pitches, performances, and presentations.

Finals season creates quite a whirlwind on campus — but here’s the thing:

In academia, students and teachers will follow this same familiar cycle every semester — often multiple times each semester. Today’s finals are only a month or two removed from fall midterms after all, and only a few months from now will come spring midterms, then spring finals, and on and on.

We may lose the nomenclature when we join the professional ranks, but we keep the cycle. We prepare make-or-break presentations at the end of every month and every quarter. Every year (right around now, as a matter of fact) we make a final pitch for next year’s budget allocations. As a matter of routine, we’re tested to deliver on deadlines, see projects start and finish on schedule, and earn the approval of managers, executives, and a host of other internal and external stakeholders.

Finals season is forever upon us — all we can do is make sure we’ve prepared. And as today’s academic institutions are demonstrating, one new and already-invaluable part of that preparation is video.

Today’s managers and executives can look to teachers and professors, who use video to share tips and best practices that help ensure their charges understand what’s asked of them.

Today’s individual contributors and front-line employees, meanwhile, can follow the examples of modern students — who rely on video as an on-demand study guide that makes it easy to review anything and everything they need, instantly, and without parsing through dense handbooks and manuals.

This week we saw more and more people taking advantage of video to communicate, instruct, and inform. And in the spirit of passing it on, these are just a few of the ideas shared this week with Panopto’s video presentation software. 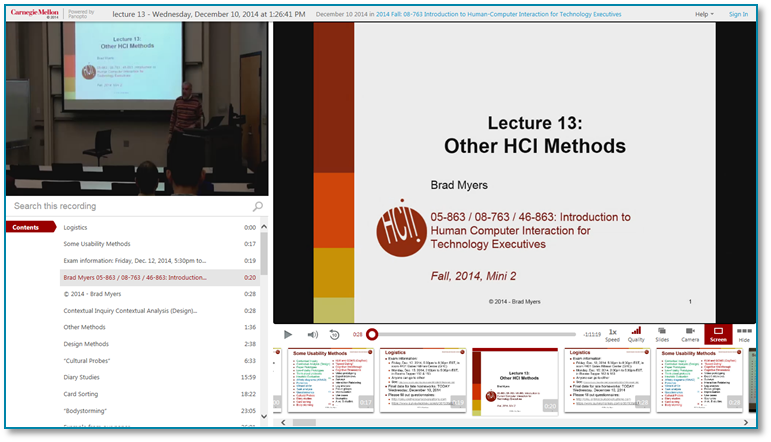 Introduction to Human-Computer Interaction for Technology Executives
Sit in with Carnegie Mellon University professor Brad Meyers for this lecture capture recording of his class on human-computer interaction issues and considerations for technology executives. The class covers a host of interaction possibilities, from prototyping to personas, card sorting to cognitive walkthroughs, and from A/B studies to affinity diagrams. It’s essential information for anyone designing technology meant for human interaction.

The Role of Celebrity in Young People’s Classed and Gendered Aspirations
Amid growing concerns in the UK that the ubiquitous presence of celebrity culture is impacting negatively on young people’s aspirations, journalists, MPs and teachers unions have spoken out about the ‘dangerous effects’ of celebrity expressing concerns that young people just want fame rather than achievement based on hard work and skill. Join Dr Laura Harvey and Dr Kim Allen for this recorded keynote address, discussing their study building on recent research suggesting that celebrity informs young people’s education experiences and career choices in more complex ways, and exploring how accounts of aspiration within celebrity (including stories of success, talent and self-realisation) shape young people’s imagined futures. 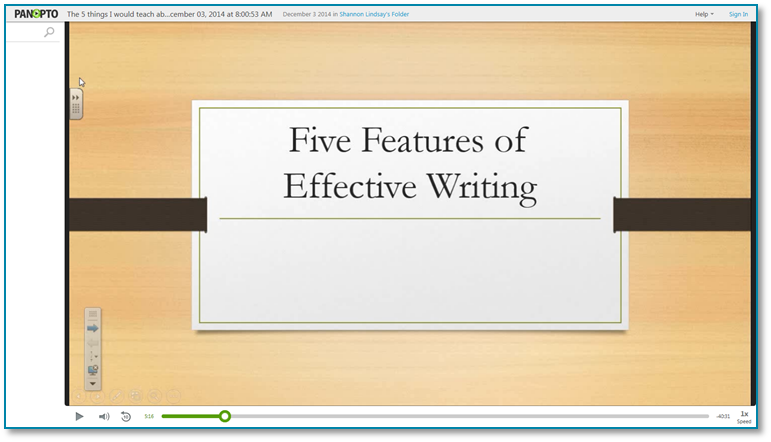 The 5 Things I Would Teach About Writing If I Only Had One Class
For many, finals week involves wrapping up all the work of the previous period and offering a concise, memorable summary. And Southern Illinois University’s Shannon Lindsay has offered an excellent example of just how valuable such a recap can be, in this flipped classroom recording summarizing the five most important features of effective writing. 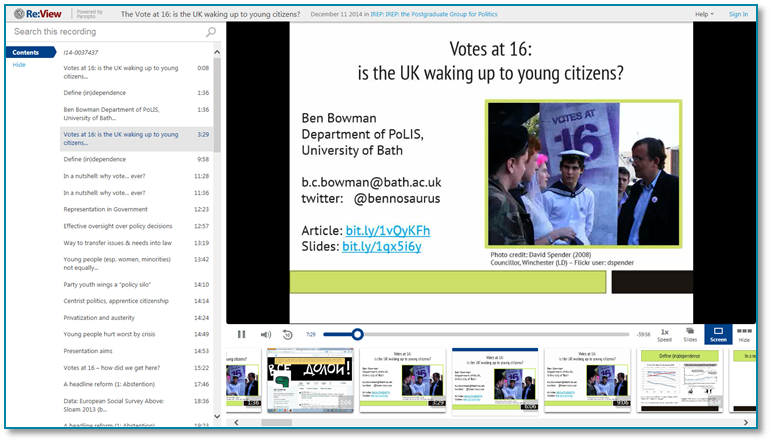 The Vote at 16: Is the UK Waking Up to Young Citizens?
The next general election in the United Kingdom may be the last in which 16 and 17-year-olds cannot vote, after the announcement that the Labour party has targeted extending the legal age of suffrage to 16. Join Ben Bowman of the Department of Politics, Languages and International Studies at the University of Bath for his review of his own research — using focus groups and photo diaries— to explore young people’s politics during the transition to adulthood in the UK. 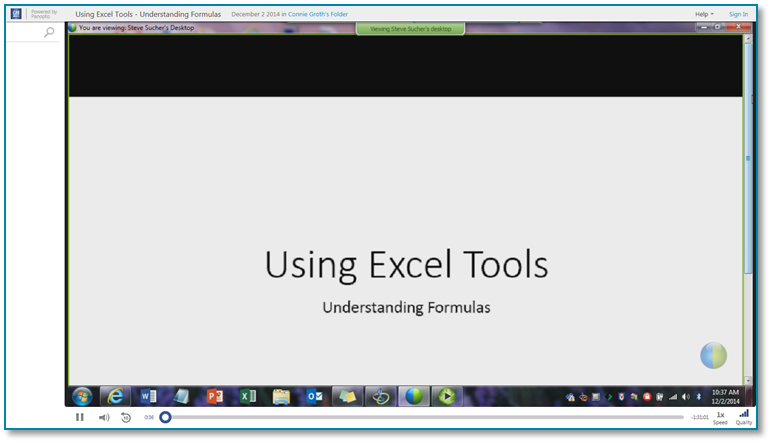 Using Excel Tools – Understanding Formulas
Work smarter, not harder. Join the General Motors learning team for this complete introduction to the latest tools, formulas, and functions available in Microsoft Excel. Excel has been an office mainstay for nearly two decades — make sure you’re getting the most from this essential tool. 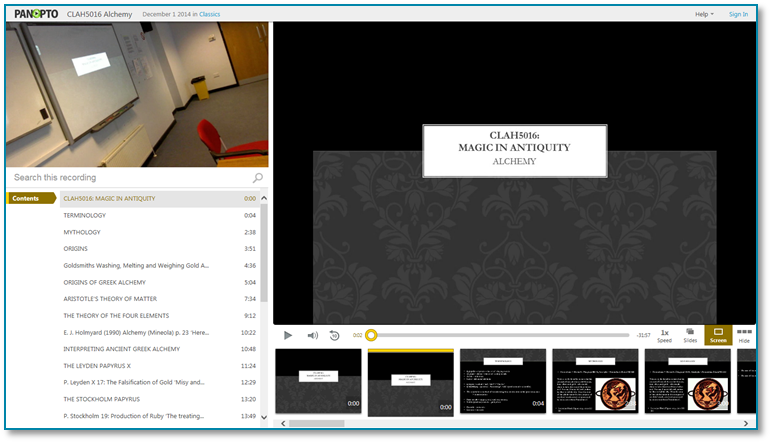 Magic In Antiquity: Alchemy
Sit in with the class at the University of Wales Trinity Saint David for this fascinating look into the science of turning lead into gold… almost. This recorded lecture looks into Aristotle’s Theories of Matter and the Theory of Four Elements, and attempts to understand this medieval practice both as an applied science and a philosophical religion. 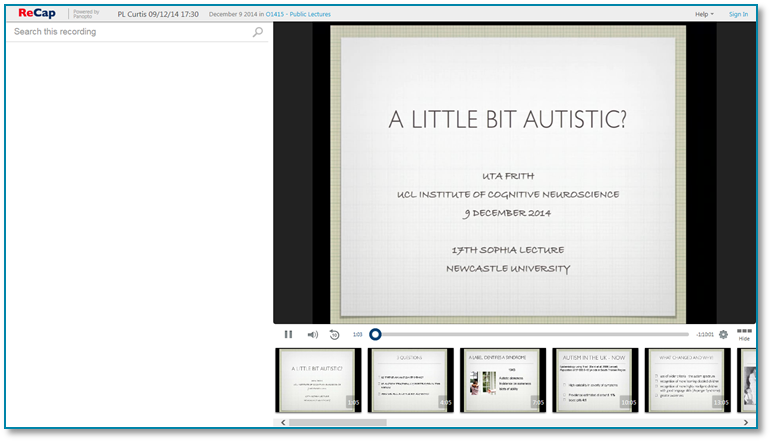 A Little Bit Autistic?
Fifty years ago the word ‘autistic’ was not in our vocabulary and only few people knew anything about the condition. Now autism has become part of our everyday language and there seems to be an increase in cases. But is there a real increase? Autism is now an umbrella term for a very heterogeneous clinical picture including very mild as well as very severe cases. There is however a common denominator and it comes down to two features: difficulties in social communication and narrow interests. Listen in as Uta Frith, Emeritus Professor of Cognitive Development, argues that the type of social communication difficulty in autism is not simply a personality factor, but rather, is due to the lack of a newly discovered social sense, known as ‘mentalising’. The detail focused tendencies seem to have a different origin, and they can be more or less pronounced in everybody. Thus, there may well be many different forms of autism, and in some sense we can all be a ‘little bit autistic’. 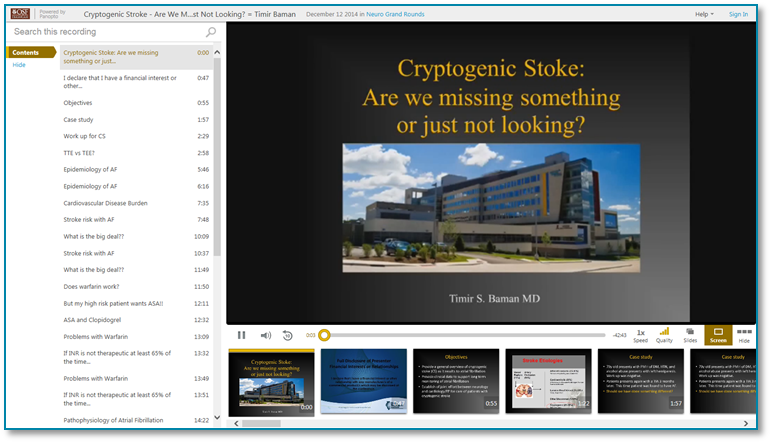 Cryptogenic Stroke: Are We Missing Something Or Just Not Looking?
Finally this week, join the physicians at the OSF Saint Francis Medical Center for this detailed look into the causes of strokes, with particular focus on the 25-30% of “cryptogenic” strokes that currently are of unknown cause.
Try It For Yourself!
Panopto makes it easy for anyone, anywhere to record presentations and share them online, both as live streaming webcasts and recorded on-demand video. To see how Panopto can help you share your ideas, contact our team for a free trial today.