Everyone hates the coffee maker in our office.

If it isn’t impossible to figure out — and that’s not a small if — at the very least it’s a learned skill. Measurements must be exacting. Temperatures and timing held to six sigma standards. Every step perfectly choreographed in sequence.

And if the machine itself is pointlessly complicated (seriously, what do any of the second row of buttons even do?), the instructions are worse. Convoluted explanations somehow simultaneously too vague and overly detailed, set in 6 point font to save space for a dozen other translations.

And the worst part? It’s just the coffee maker. We’ve all got better things to work on.

Likely we’d have given up and left it to collect dust years ago, leaving the office to sate our caffeine needs instead at the coffee shop across the street – if it weren’t for John.

And that’s because while its got nothing to do with his day job, John is one of the members of the team who made it a mission to figure out the maddening machine — and more importantly, John is the one who figured out how to show everyone else how to make it work.

The value of any system — from simple office conveniences to mission-critical programs and technologies — can only ever be equal to how well we understand them. The Next Big Thing will forever be nothing more than a black box if your people can’t figure it out and put it to work.

In today’s workplace, virtually everyone is a subject matter expert in something. For every tool and every process, no matter how big or how small, there’s someone on your team everyone else turns to for quick insights on how to make it work its best — so everyone can get back to the better things they need to work on.

Social learning — that kind of informal peer-to-peer knowledge sharing — has been around forever. What’s new is that today, we can capture and preserve it — so all that institutional knowledge doesn’t walk out the door every night.

Of course, as with an information, how you present is just as important as what you present. And that’s where video software for social learning like Panopto can be incredibly helpful. After all, John’s 45 second video walkthrough of our coffee maker doesn’t say anything that isn’t in the instructions (we think), but by bringing the topic visually to life and showing instead of telling, he helped us instantly connect the dots.

This week we saw more and more people taking advantage of video to share ideas, send messages, and make a statement. And in the spirit of passing it on, these are just a few of the ideas shared this week with Panopto. 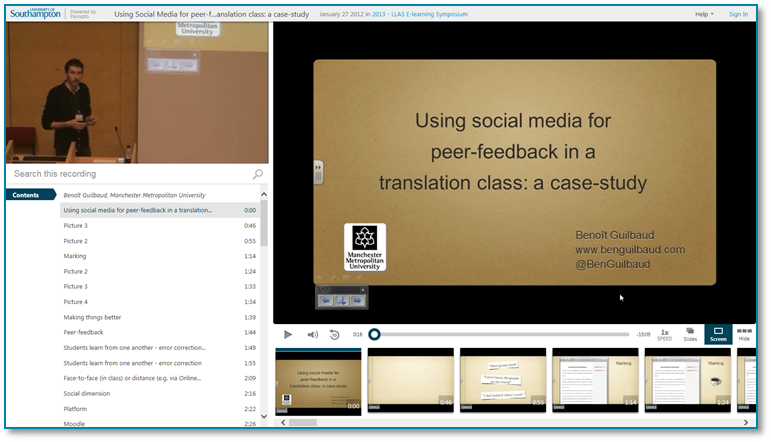 Using Social Media for Peer-feedback in a Translation class: a Case Study

Join Manchester Metropolitan University’s Benoît Guilbaud for this recorded presentation shared at the LLAS eLearning Symposium at Southampton University. Guilbaud looks into the possibilities offered by the Internet, and specifically its effects on participatory and informal learning. As a central narrative, the presentation examines the setup and use of a social networking site as a means for students in a language course to share ideas and provide peer-feedback to one another. 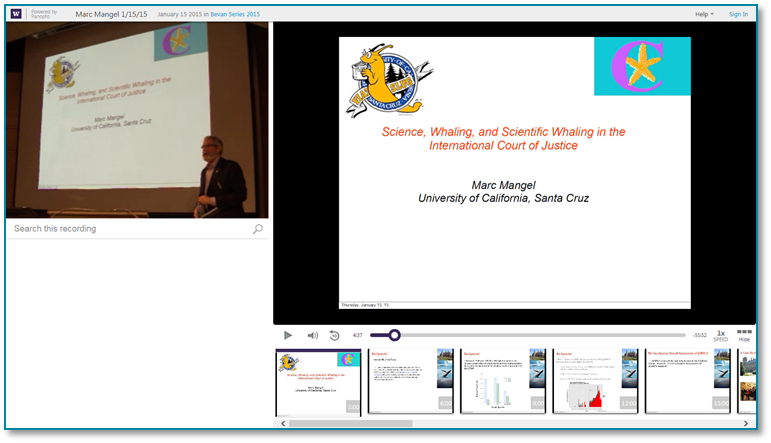 Science, Whaling, and Scientific Whaling in the International Court of Justice

Join Marc Mangel, Distinguished Research Professor of Mathematical Biology at the University of California, Santa Cruz, for this fascinating recorded lecture on the history that lead to Australia initiating a case in the International Court of Justice in 2010, challenging the legality under international law of the Japanese special permit whaling program in the Southern Ocean — a case that had direct implications for what it means to have a program for purposes of scientific research. Mangel describes his involvement as the Independent Scientific Expert witness called by Australia before oral proceedings in The Hague, and discusses the implications of the decision for other situations in which science and law interact. 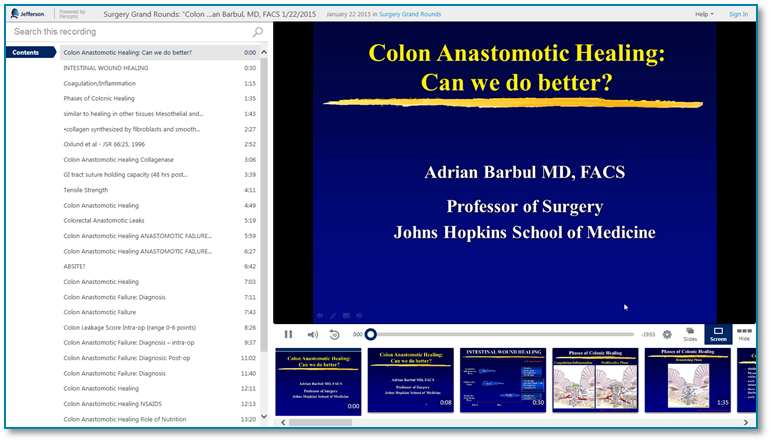 Colon Anastomotic Healing: Can We Do Better?

The healing of colonic anastomoses — the connection points the in intestine — is slower and accompanied by more complications than healing elsewhere in the gastrointestinal tract. Join Dr Adrian Barbul, Professor of Surgery at the Johns Hopkins School of Medicine, for this Grand Rounds social learning review of what the medical field knows about helping this particular medical concern, and whether it may be possible for healthcare practitioners to do better. 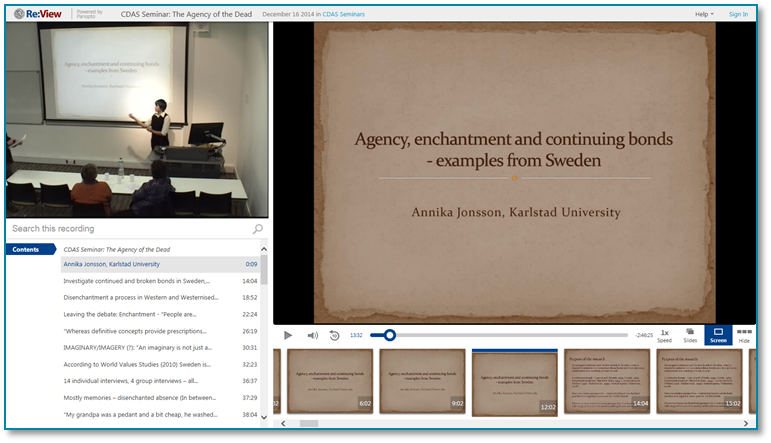 Whether, and in what cultural, historical, political, or personal circumstances, the dead can exert agency, are believed to exert agency, or are mobilised by the living to exert agency, are questions implicit in bereavement research into continuing bonds and collective memory studies. Many traditional societies impute such agency to ancestors, but most secular modern societies consider such ideas absurd, insisting the living may be influenced by their collective memory of the dead, but not by the dead themselves. Explore the topic further with Karlstad University’s Annika Jonsson, whose project on Death, Agency and Enchantment looks into how some contemporary cultural changes may be imputing more, not less, agency to the dead.