Switching From An On-Premises Solution To The Panopto Video Cloud

In 2011 the University of South Australia (UniSA) was an early adopter of “opt-out” lecture recordings.

Committed to fostering a culture of innovation across its six campuses, UniSA had deployed a highly customised on-premises Echo 360 lecture capture system. Tightly integrated into the institution’s entire learning technology ecosystem, the system enabled UniSA to automate lecture capture in its classrooms, empower its instructors to advance their teaching practices, and offer its students more flexible options for personalising their individual learning experiences.

With a specific focus on capturing lectures, it was a system that worked well for UniSA. But when the existing system was discontinued, the university was compelled to explore alternative options.

Initially UniSA considered simply transitioning to the incumbent provider’s new cloud-based platform. However, the features and pricing of the new model were a significant change, requiring a robust tender and procurement process.

As such, UniSA commenced the Lecture Recording System (LRS) Project, and began soliciting feedback from staff and students from many disciplines across the University in order to identify what was valued in a lecture capture system.

After identifying the key user requirements for lecture capture, as well as the needs and goals of the university at large, the LRS Project commenced a formal tender that included a comprehensive evaluation of a number of lecture capture solutions.

A Scalable and Adaptable Alternative for Classroom Video

Panopto was evaluated as the lecture capture solution that would best support UniSA’s culture of innovation and its long-term goals for teaching and learning. Panopto’s extensible, cloud-based video platform was technically robust yet simple to use, and would provide UniSA with a flexible, end-to-end video solution that could grow with the university’s needs while keeping costs at a minimum.

Scalable in the cloud. 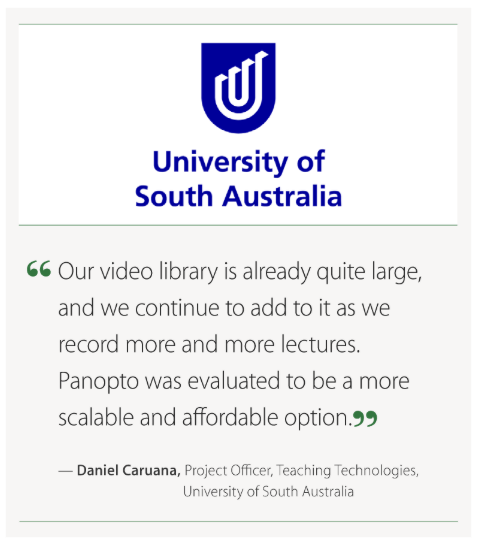 Without hosting or storage constraints, academics could use Panopto to experiment with video in new, innovative ways, such as recording feedback for students in videos and going beyond the lecture to offer more blended learning courses.

Daniel Caruana is a Project Officer on the Teaching Technologies team at UniSA, and was involved in much of the procurement and implementation of Panopto. He stressed the importance of planning for the future when it comes to choosing a lecture capture solution. “Our video library is already quite large, and we continue to add to it as we record more and more lectures. Panopto was evaluated to be a more scalable and affordable option.”

The LRS Project stakeholders have been happy with the performance of Panopto’s cloud-based video platform. “Panopto has been responsive with minimal latency, particularly when we make API calls behind the scenes overnight,” Daniel remarked.

Panopto includes powerful, pre-built integrations that enable universities to extend the Panopto video platform into Learning Management Systems (LMSs) like Moodle and user authentication systems like Active Directory. However, after years of relying on a highly-customised system, UniSA already had an established structure for its lecture capture system to work together with its broader learning technology ecosystem. To minimize the change for faculty and students, the university utilised Panopto’s open and documented developer APIs. This enabled UniSA to incorporate Panopto into its existing systems just as they had with the previous lecture capture system.

“One of the more significant things we’ve been able to do has been customising our integrations with the API from Panopto,” said Daniel. “That‘s enabled us to sync Panopto with our timetabling system and our LMS to fully automate recording in all lecture recording enabled spaces.” This fulfilled the required continuation of opt-out lecture recording that had proved so successful over the years.

With Panopto, UniSA set up a fully automated lecture recording system. In short order, Panopto was successfully recording, processing and uploading all scheduled lectures. The completed recordings were then published on the corresponding course site in Moodle using a seamless, behind-the-scenes process that required little interaction from instructors.

The power to do more with video.

Both staff and students had requested a lecture capture solution that could help enhance learning on campus — and each cohort would come to find that Panopto that would do just that.

With Panopto, UniSA instructors have gained the power to experiment with new and innovative video-supported teaching pedagogies like the flipped classroom and other blended learning models. Panopto’s flexible video recording software enables instructors to create course videos anywhere, right from their laptops or smartphones. Simple edits can be made in any web browser, and instructors can request human-generated captions for any or all of their videos with just a few clicks.

Already lecturers at UniSA are finding new opportunities for enhancing their classroom experience with Panopto. As Daniel explained, “Now we have instructors working with our Teaching Innovation unit, learning how to use Panopto to record micro-learning videos and new types of video-based course content on their laptops in their offices, in our green-screen studios, and really from anywhere they want.”

Staff have also begun to use Panopto’s video conferencing integration to record and revisit their real-time communications such as department meetings, research collaboration, virtual office hours, and more.

UniSA students, meanwhile, have experienced a higher overall quality of their classroom videos. With Panopto, video of the instructors’ presentation is automatically synchronised to the slides, screen recordings, and any other content presented during each class, so the resulting video always aligns with the correct visual content. Panopto automatically optimises video playback for any device a student may be using, ensuring students can stream recordings even in low bandwidth environments. Students also have the ability to control playback speed, configure how captions are displayed, and take notes right inside the Panopto video player.

Panopto even helped UniSA students solve a problem they didn’t know they had. Panopto’s Smart Search video search engine automatically indexes every word spoken or shown on-screen in every recording, enabling viewers to instantly find and fast-forward to relevant moments. As a result, students now have an improved experience for revision and study.

UniSA is well progressed on migrating all existing and new media content to Panopto as UniSA’s dedicated media management and storage solution. This includes thousands of Green Screen room recordings, as well as the UniSA library’s catalogue of AV media.

About The University of South Australia

The University of South Australia (UniSA) is a globally connected and engaged university helping solve the problems of industry and the professions. Its culture of innovation is anchored around global and national links to academic, research and industry partners. Its graduates are the new urban professionals, global citizens at ease with the world and ready to create and respond to change. And its research is inventive and adventurous, creating the new knowledge that is central to global economic and social prosperity.

Thinking About Making The Switch From Echo360 to Panopto?

It’s easier than ever to switch from Echo360 to Panopto. Our Echo360 migration program transfers your Echo360 media files into your new Panopto video library and provides additional professional services to make the transition seamless.