Variable Speed Playback: Watch Lecture Videos at Your Own Pace

As lecture recording becomes ubiquitous on college campuses, more and more students are using their video platform’s variable speed playback (VSP) features to get the most out of their video review sessions.

What is Variable Speed Playback?

When it comes to online video streaming, most video platforms only allow viewers a single playback option: press the Play button, and the video plays back at normal speed.

However, modern video platforms offer viewers a range of playback options that enable them to change the rate of speed at which the video is presented.

For example, regular speed playback — the rate at which videos are usually presented — is referred to as “1x speed.” When you click to play the video below, it’s the normal rate of speed at which the video plays back.

In contrast, modern educational video platforms that support Variable Speed Playback give students the option to play videos back slower or faster than normal speeds.

Try It: Speed Up and Slow Down Video Playback in Panopto’s Video Player

To try this out on the video above, click the image to open up the Panopto video player. From your desktop web browser, click the 1x Speed button at the bottom right side of the player. In the Play Speed menu that opens up, you can choose different playback speed options from .5x (half speed) to 2x (double speed).

Why Would Anyone Want to Change Video Playback Speeds?

While the idea of playing back a video in anything other than regular speed may seem odd, it’s a feature that many students find is nearly as indispensable as lecture capture itself. When reviewing lecture videos, students will frequently use VSP features to either speed through material they already know or slow down the video playback to get a better understanding of more challenging concepts. 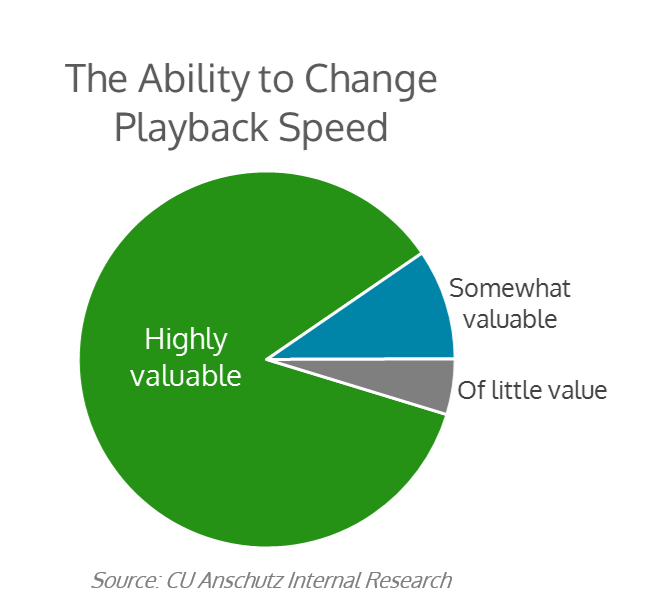 For international students attending courses that are not in their native language, using variable speed playback makes it possible to pay undivided attention during in-class lectures. After class, students can review the recorded lecture to consolidate their learning and locate any missed points. Features like inside video search allow students to locate and fast-forward to specific parts of the lecture, while VSP offers the ability to watch the lecture back at half speed if needed. The flexibility of VSP is helpful when students are having trouble following a professor speaking at normal speed.

At the University of Colorado Anschutz Medical Campus, variable speed playback was rated by students as a “highly valuable” feature of their Panopto lecture capture platform by more than 4 out every 5 students surveyed. In another study published in the Journal of the International Association of Medical Science Educators, over 80% of the Michigan State University students surveyed had used the VSP feature when viewing recorded lectures, with over 96% rating the feature useful. 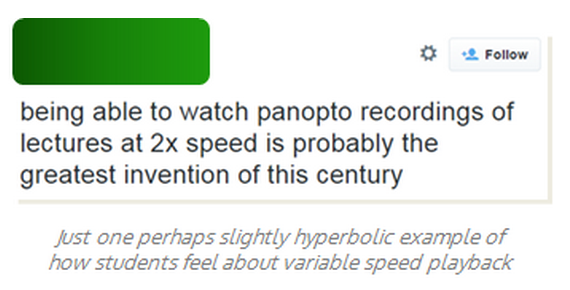 Variable speed playback is just one more way universities help give their students more control over their learning experiences. Anecdotally, as something of a modern-era testament to just how much students appreciate the ability to tweak the pace of their lectures without missing a moment, here at Panopto we also continually find that variable speed playback is one of our most tweeted-about features.

Panopto’s embeddable video player offers the best possible video learning experience anywhere online and in your LMS. You can easily upload videos not recorded in Panopto to enable interactive features when viewing. Or better yet, integrate Panopto with Blackboard, Canvas, Moodle, D2L, and more to automatically share learning optimized videos with VSP in your courses.